Kelly Bailey is an adult amateur based in northern New Jersey who has trained with Meg Kepferle for the last seven years. She works full-time as a home health aide in an assisted living facility. She writes, "This year I saw a change in my riding and all my hard work come out, but this year was different because I lost my loving mother in January to cancer. On her final days she told me this was going be my year. My story honors her and proves that a mother is always right, and most of all for us to never give up!" 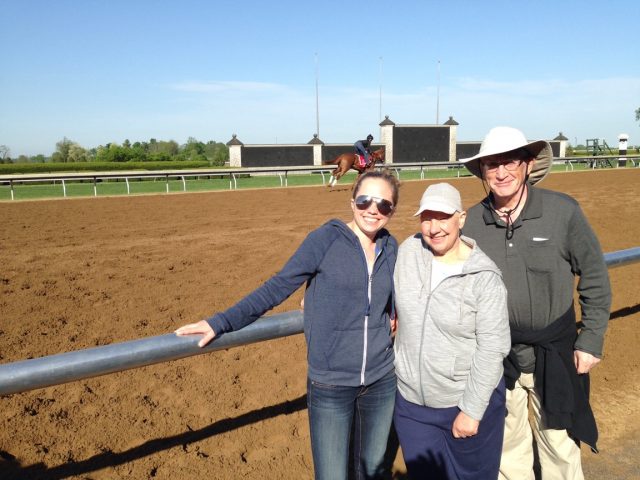 Kelly Bailey, left, with her mom, Melanie, and dad, Pat.

Imagine you are a 26-year-old amateur event rider. You ride with the one and only Meg Kepferle. It’s the fall of 2016 and your trusty mount is spending a few weeks with her for a tune-up. Cross country has always been a bit of a struggle throughout your eventing career. For some odd reason you keep pushing through.

It was the end of September last year when Meg said, “Kelly, I’m sorry, but right now it’s not safe for you to event.” Your heart shatters because your life outside of horses includes a mom who’s fighting pancreatic cancer. You have the whole fall season entered and planned. You scratch from every event.

One thing my mom made me promise during her two-year journey of fighting cancer was that I would still ride. When she told me about her diagnosis in January 2015, one of the first things she said was, “Kelly, you will continue to ride and event.” This cancer was not going to stop our normal family life, which greatly involved my eventer Poe and our two senior citizen horses.

She made sure she was at the first combined test of the year that April. I can still hear her on the bench telling my dad to look at Poe. “He’s being a handful!” which wasn’t like him. My dad laughed and said, “Melanie, it’s the first show of the year after a long and cold winter.” She was my number one fan and always a phone call away when not at shows.

Now you’re probably wondering why I had to miss out on the fall season in 2016. It was due to the fact that Poe had developed a bit of anxiety on cross country. A combination of horse and rider both having anxiety out there was not safe. So Meg and my mom made a plan that in the long run would benefit me and Poe in so many ways. 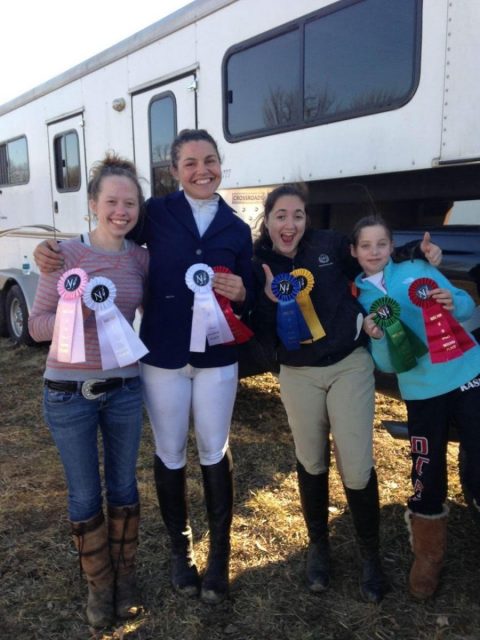 Kelly, left, with Meg after a successful show day with friends.

Meg recommended that I call Charity Paashaus, who is an amazing natural horsemanship trainer in Area II. I also started working with a sports psychologist to help me walk through some of the mental blocks I face. My mom agreed it was a good idea. She knew I had developed some fear issues over the years with jumping.

So Poe and I began to work with Charity. We first started with a session at my family’s farm, which was a huge success. We then spent the rest of the fall season working out on the cross country field. Charity was great for videoing and capturing pictures of my sessions with her, which helped me to see our progress.

I remember one of the sessions was on a cold, windy day in October. Dad and I drove down to meet with Charity. Mom was in the hospital at the time. I remember sending her a video clip of me riding out there on cross country and going clear over a very large ditch. I knew it would bring the biggest smile to her face.

Fast forward to New Year’s Eve, December 31, 2016. I went to work for a few hours. Everyone was asking, “How’s mom doing?” My response: “She’s hanging on and fighting.” On the way to the hospital to visit her that night, I received the news: My mother was officially terminal ill with less than three weeks to live.

I can still remember texting my dad that it wasn’t true. His response: “I’m sorry, kiddo, but it is. Know that I have comfort that Meg and Katie, your two longtime trainers who lost a parent, are going to help you through this.” He told me later in the waiting room that mom had made him promise to make sure I stayed riding and competing.

Then there was the day we were all at the hospital to bring mom home to our farm. My mom took my hand and told me it was going to be my year. I said, “Mom, I hope it is, but you know I have the worst luck.” My last four years with Poe had been a battle of Lyme disease, EPM and an old injury reappearing that ended our season early in 2015. My mom replied, “You keep kicking on until you make it to Rolex.”

My mom told me 2017 was going be the year I achieved my long-term goal of qualifying for the American Eventing Championships. And she was right. I did it. I would be lying if I said I didn’t doubt that at times.

I think back to my first event at Plantation Field in April, where I attempted to ride with a case of bronchitis. Let’s say the nerves and not being 100% ended in retirement after fence six on cross country. I remember there being a woman that looked identical to my grandmother, who passed away six years ago. She was a complete stranger, but she watched me warm up for stadium and cross country. She was also the first person to approach me when I jumped off of Poe and said I couldn’t breathe.

I remember standing at the trailer looking at Meg, saying, “How am I going to do this season? I miss mom way too much.” Meg said, “I know you do, Kel. I miss her too. We have got to keep on kicking. That’s what mom would want you to do.” 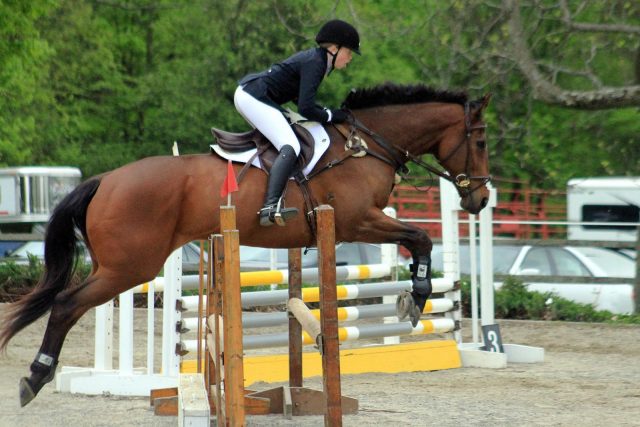 Two weeks later I headed up to Grindstone Mountain with my dad. He looked at me in the hotel room and said it was going to be hard not having mom there. Poe and I finished the day in third place. Dad turned to me with tears in his eyes and said, “Mom was just with us.”

I remember being at Essex Horse Trials and telling dad, “I know she’s here today.” My mom was ecstatic that there was going be an event in New Jersey. She had high hopes of attending it. I remember galloping through the finish and my dad being the first one I saw. He high-fived me and said, “Way to ride in the big leagues!”

The second person I saw was Meg, who I stopped to hug. She turned to my dad and said, “She finally galloped, Pat!” I can still hear them both laughing about how I finally went fast. I remember being out there on cross country feeling like I was in the galloping lanes of Kentucky. Most of all I know my mom and grandmother were with me on either side, running with me along that course.

A tear came to my eye when I remembered going through the water complex and hearing a spectator say, “She rode that beautifully.” It made me think of my mom, as I know if she had been there in person she would have told everyone, “That’s my kiddo!”

Two weeks later I competed at Riga Meadow — another double clear. (We did give my father a major scare of “is my daughter’s horse going to stop?” as Poe came across the finish ready to go run again.) We earned our first purple ribbon of the year. That ribbon meant everything to me, as purple represents pancreatic cancer awareness.

Although we qualified, we unfortunately had to miss the American Eventing Championships due to Poe being kicked in his right hind leg. (Also due to the fact that this young amateur is on her way to the altar next May. Any true horse lover gets married on Kentucky Derby day!)

We opted to run at the Area I Championships at Town Hill Farm instead. Unfortunately, it wasn’t my weekend and ended in elimination. To say I was crushed would be an understatement. I was devastated.

My sports psychologist helped me get my head back in the game. She has reminded me all season that no matter what happens, no one can take away the successes I’ve had. I’ve constantly reminded myself that I’m not the rider I was two years ago.

During my dressage lesson the other day it dawned on me: I was having the most fun this season. Yes, I was finally having fun! My USEA record may show four retires, one elimination and four double clears, but I can tell you one thing: No matter how hard it gets, don’t ever give up. Most of all, just have fun and enjoy it!

When my mom passed away exactly three weeks from the time the doctor gave her, I didn’t think I would be able to do it. Once again, those horses saved me. I know my mom may not be here in person, but I know for sure she would be ecstatic at all the triumphs I have had this year.

So my words of advice to all of us young amateurs out there who are working hard: Keep on kicking. A huge thank you to my village that has stood behind me. It took the loss of a parent for me to finally put it all together. I call it the year I got my head out of the clouds and rode.