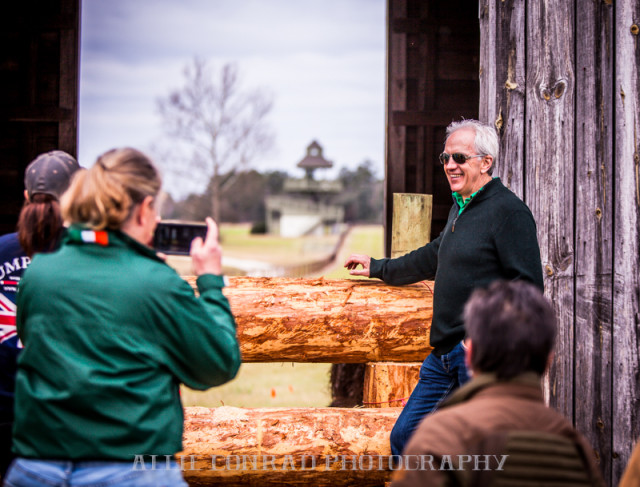 Ian Stark at Carolina International, one of many courses he designs at around the world. Photo by Allie Conrad Photography.

Ian Stark has a lengthy riding resume, including multiple medals at Olympic and World Equestrian Games. Following his success in the saddle, he began designing cross country courses, leaving his mark on some of the most impressive three-star venues in the world.

Ian has now stepped up this fall into a temporary advising role for the United States at international competitions. He began at Burghley Horse Trials, where two Americans finished in the top 10, and continued at Blenheim, where our own Kim Severson took the prestigious win. We took a few moments to chat with Ian about the position.

EN: Can you tell us about your new role with U.S. riders overseas this fall?

Ian Stark: “There’s three of us. There’s Derek di Grazia on the West Coast of America, Phillip Dutton on the East Coast and me in Europe. We’re working as a team with the riders. We’re cross country advisors or coaches. We’re mentoring the elite riders for the rest of the year. For the moment it’s only short term until the end of the season.

EN: How has the season been going so far?

Ian: “Burghley was my first one. I’ve known the riders for quite a number of years, but I’ve never really worked with them. We were straight into the heat of it all at a big four-star, and it was great. As far as I know the riders were positive. They’re a great bunch of people with some lovely horses.”

EN: What have your responsibilities in this position included?

Ian: “My job at the moment is to walk the courses and give them some ideas about lines and get to know them. As a course designer and as an ex-rider, I hope that I know what the designer is looking for, so I can discuss with each rider individually what’s going to work best for them and their horses.”

EN: How have you managed advising riders without knowing them very well?

Ian: “I’m just getting to know the riders and their horses. We’ve done a lots of chatting and walking courses. I’ve looked at lots of videos, but I haven’t been helping them on a one-to-one basis jumping cross country fences, so I don’t want to weigh in straight away. They’re all very top riders, they’ve got their own ideas, so if I can say, ‘I would think about this line,’ and explain it and discuss it.”

EN: Has this strategy seemed successful to you?

Ian: “I feel the riders are very switched onto it. They’re very open to ideas and suggestions, and then they’re all good enough that they can work it out for themselves what they think will suit themselves and their horses best.”

EN: You sounded a bit relieved when you spoke on the live stream at Burghley and told listeners that Boyd Martin followed your advice and ended up with a top finish. What did that feel like?

Ian: [Laughter] “He was incredibly receptive because we walked the course and he kept telling me his lines and I’m going, ‘Why? Why are you doing that?’ And we discussed it.

“I felt a lot of pressure, but Boyd rode every line as I suggested. He rode quite brilliantly and took all the ideas on board.”

EN: Have you enjoyed the position?

Ian: “I have to say I’m loving it. There’s a lot of talent in America, and if I can do a little bit to help then I’m delighted. America has been incredibly good to me with teaching clinics and with course designing, so it’s great for me to feel as though I’m giving something back in return. I’d love it to continue, but obviously the role might be filled with a more permanent person.”

EN: And what if it did continue?

Ian: “If this continues, then I hope to be doing more cross country clinics with the American riders both in Europe and America, as when you get to know the combinations then you can have more influence.”

EN: How would you describe the U.S. performances you’ve seen so far?

Ian: “At Burghley we had two in the top 10, and at Blenheim we had the win and there was another three within the top 12, which was fantastic really. For so few competitors to have that many in the top brackets was excellent. I just hope they continue to build in confidence.

“They certainly have the ability. I’ve said all along, the talent of horses and riders in America is not in doubt, it’s just a question of self belief as much as anything. I think for me over the last couple of events just getting to know them, I feel as though they’re all very punch and positive and heading in the right direction and that’s a great sign.

EN: You had pelvic surgery recently. How has your recovery gone?

Ian: “It’s been seven weeks since the operation. I’m still on crutches for another five weeks, but I’m getting around. I’m doing everything. I’m now allowed to drive again, so I’m not too restricted. They just don’t want me doing long haul flights until January to lessen the risk of blood clots and thrombosis because it was a pretty major operation to my pelvis. I’m in great form now and no pain, which is the big plus.”