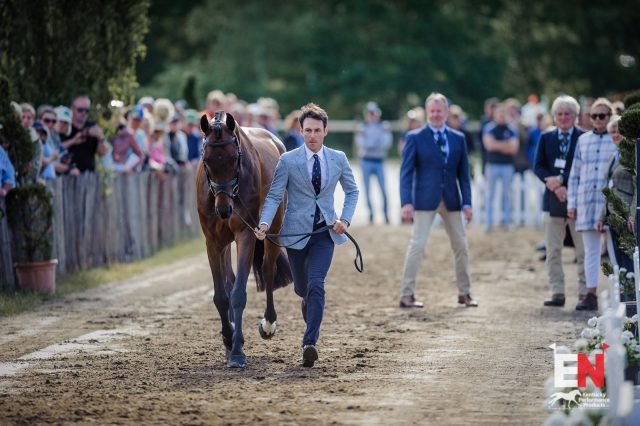 Overnight leaders Felix Vogg and Colero are accepted into the final phase. Photo by Tilly Berendt.

After an exciting and influential cross-country day in yesterday’s soaring temperatures, today’s horse inspection was always going to be an interesting one — and it certainly turned out that way, with our field of 24 thinning down to a mere 21 as we head into the pivotal final phase. 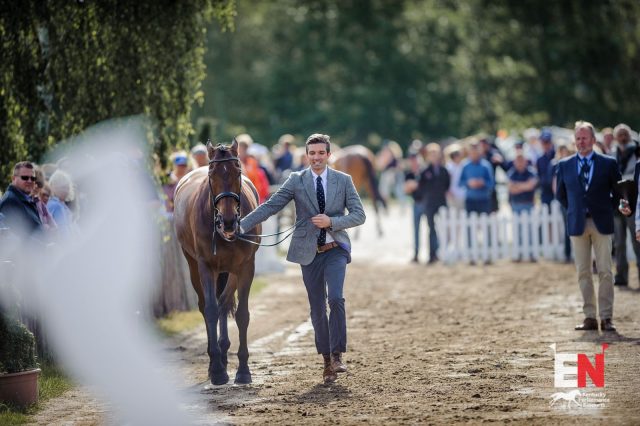 Debutants Max Gordon and Redwood Clover are one of four holds this morning, and are ultimately sadly spun. Photo by Tilly Berendt.

Four horses of the 24 presented were sent to the holding box during the course of the morning’s inspection: Ireland’s Alex Donohoe and Guidam Roller, who had also been held in Wednesday’s first horse inspection, once again found themselves sent to the box and ultimately accepted upon re-presentation, while Austria’s Lea Siegl, 21st after cross-country, opted to withdraw Cupido P from the holding box, as did South Africa’s Victoria Scott-Legendre, 14th after cross-country with Valtho des Peupliers. Great British debutant Max Gordon re-presented Redwood Clover, 19th after cross-country, but was not accepted to continue on to this morning’s showjumping finale. 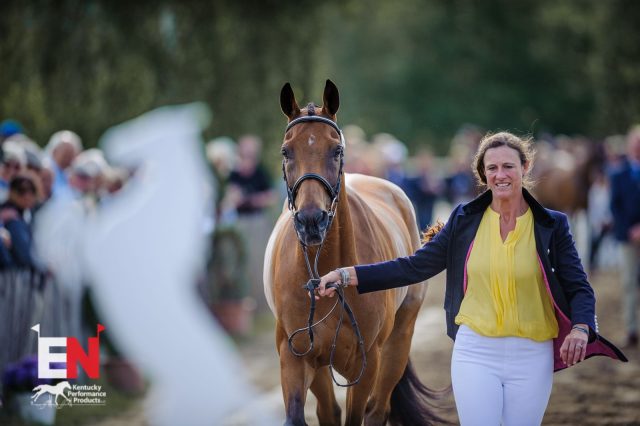 The final phase will begin promptly at 10.15 a.m. local time (9.15 a.m. BST/4.15 a.m. EST), and is certain to cause its fair share of influence: Luhmühlen is renowned for having the biggest, most challenging showjumping courses of all the five-stars, and today’s course is among the toughest we’ve walked here, with a related distance of a double to a double that looks set to cause plenty of poles to fall. Just one rail separates the top seven in the CCI5*, which is held overnight by a 0.1 penalty margin by Switzerland’s Felix Vogg and Colero, ahead of Tim Price and Vitali in second place and Oliver Townend and Dreamliner in third. They’re closely followed by an exciting double of female British talent in Kirsty Chabert and Classic VI, fourth, and Kylie Roddy and SRS Kan Do, fifth, who show jumped clear on their debut at Pau last year. 2018 winners Jonelle Price and Faerie Dianimo sit in a handy hunting ground in sixth place, just 2.6 penalties off of the top spot, followed by Lauren Nicholson and Vermiculus in seventh place. Oliver Townend has a second debutant in the top ten in Lukas, eighth, while the hugely experienced duo of Cathal Daniels and Rioghan Rua keep Ireland in the hunt in ninth place. Kentucky CCI4*-S winners Liz Halliday-Sharp and Cooley Quicksilver round out the top ten on 35.1, still just 6.1 penalties off the lead.

Here’s a look at how both the leaderboards stack up going into the final phase:

The top ten after a dramatic cross-country day in Luhmühlen’s CCI5*.

The top ten after cross-country in the CCI4*-S.

The CCI4*-S horse inspection was mercifully less eventful, and all 40 pairs that completed yesterday’s cross-country will go on to showjump from 13.10 local (12.10 p.m. BST/7.15 a.m. EST). You can follow along with all the action on Horse&Country TV, and stay tuned for our jam-packed reports at the culmination of each class.

Don’t miss a beat of EN’s coverage of Longines Luhmühlen Horse Trials! Sign up for our free Luhmühlen Daily Digest email, sent each evening with all of our coverage and stories wrapped up in one place. Don’t miss out! [Click here to sign up for the Daily Digest]