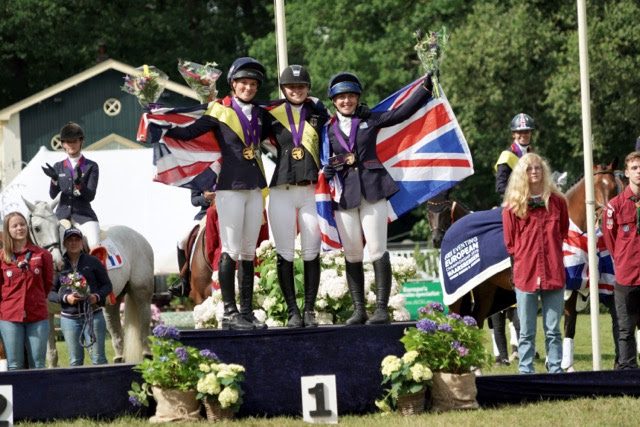 Germany dominated the 2019 FEI Eventing European Championships for Juniors and Young Riders at Maarsbergen in The Netherlands (July 10-14), taking Junior Team and Individual Gold along with the Young Riders Individual title. A total of 22 countries were represented, and Great Britain reigned supreme in the Young Riders team event.

Germany’s Jerome Robine and Guccimo R OLD led the Young Riders leaderboard after dressage with a super score of 22.1 ahead of Morgane Euriat and Baccarat d’Argonne who posted 23.4 for France. But it would be Robine’s teammate, 20-year-old Emma Brüssau, who would rise from third spot after the first phase to the top step of the medal podium when adding nothing to her mark of 25.3 at the end of the tough contest.

Robine disappeared from the reckoning on cross country day when Guccimo fell at fence 15, and when Anais Neumann also took a tumble from Pumeckel E at the same fence German team chances were dashed. In total 56 of the 66 starters ran into problems around the track, with 21 eliminations and two retirements on course. The combination water fence at seven proved particularly influential, and only four horse-and-rider partnerships made it home inside the time.

Euriat picked up just 0.4 time faults so was out in front on the final day, but 12 jumping penalties saw her drop to sixth in the final standings. Lying second overnight after a foot-perfect and on-time cross country run, Brüssau stood firm once again to finish on her dressage mark and claim the coveted Individual title.

“I’m a bit shocked and can’t believe it!, said the psychology student afterwards. However success is nothing new to Brüssau, who has an impressive CV that includes Team Gold and individual fourth at the Junior European Championships at Montelibretti (ITA) in 2016, Junior European Team Gold and Individual Bronze at Millstreet (IRL) in 2017 and Individual Silver in the European Young Riders Championship at Fontainebleau (FRA) last summer — on that occasion also with her 10-year-old Hannoverian mare Dark Desire GS.

Britain’s Isabelle Upton and the 11-year-old gelding Cola claimed the silver. Lying fourth on 25.9 after dressage they completed one of those rare cross county clears to move into third going into the final day, and a foot-perfect run over the colored poles saw them settle into silver medal spot, just 0.6 penalty points behind Brüssau’s gold-medal-winning score. This was a big boost to British team chances, and together with Felicity Collins on RSH Contend OR, Phoebe Locke on Union Fortunus, and Richard Coney on Kananaskis, Upton stood on the top step of the team podium.

Britain also claimed Individual Bronze thanks to an extraordinary performance from Heidi Coy and the nine-year-old Royal Fury who rocketed up from 26th after dressage to fifth with a superb cross country round, and then added nothing more on the final day to complete on a score of 32.6.

The British team score of 111.0 left them just over three penalty points ahead of France in Silver, while The Netherlands claimed Team Bronze on a final tally of 171.1.

It was a runaway win for Germany’s Anna Lena Schaaf and the aptly-named mare, Fairytale, in the Junior Individual Championship. The 17-year-old rider threw down the gauntlet with the leading dressage score of 24.1 and stood firm to add nothing more.

And backed up by an Individual Bronze-medal-winning performance from Ann-Catrin Bierlein with Auf Feht’s Fraeulein Hummel, a ninth-place finish for Calvin Bockmann and Altair de la Cense and 11th spot for Joelle Celina Selenkowitsch with Akeby’s Zum Glueck, Schaaf helped Germany to grasp the golden double in this division. The final German team tally was just 87.0, while Great Britain took Team Silver on a score of 97.2 and France claimed Team Bronze with 99.7.

It was British team member Saffron Osborne who was Schaaf’s closest rival after the first phase having posted a mark of 24.8 with her nine-year-old gelding Lakantus. However a stop at fence seven proved costly, and the addition of 5.6 in the jumping phase saw them eventually line up in 28th place.

Of the 75 starters on cross country day there were 15 eliminations and one retirement, and three more were eliminated in the final jumping phase. A total of 54 completed and once again fence seven was highly influential.

Britain’s Leilia Paske moved up from sixth after dressage to fifth after cross country, and when third-placed French rider Jeanne Cauvel with Iggy Pop was eliminated in the jumping arena and fourth-placed Irish contender Lilly Keogh with Master Tredstep withdrew, then Paske’s clear round with Billy McFee took the silver.

Like her Young Riders Gold-medal-winning compatriot, Schaaf is also an experienced athlete having taken Team and Individual Gold at the European Pony Championships in Aarhus (DEN) in 2016 and Team Bronze at Junior level in Fontainebleau last year. She was delighted with the performance of her home-bred Rheinlander mare who never put a foot wrong all week.

“She was so clever, and she did everything for me!” said the new Junior champion.

This report has been edited from a press release.