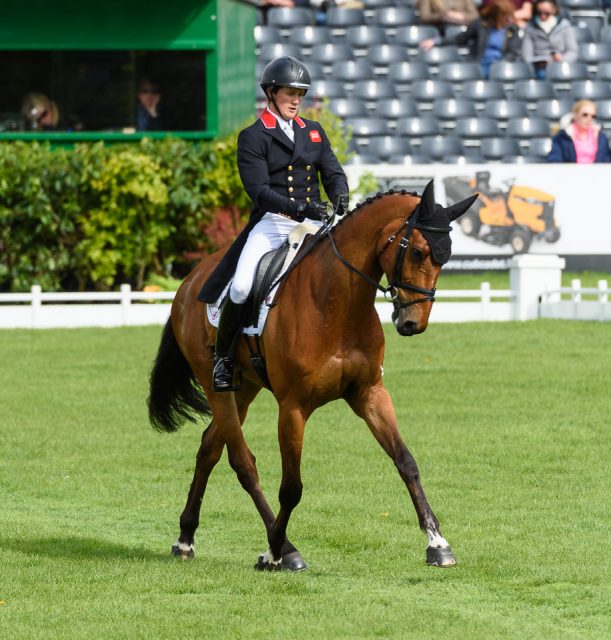 After a gruelling, Gladiator-style showdown in the dressage arena this afternoon, this morning’s leaders Oliver Townend and Cillnabradden Evo have been shunted all the way down to 10th place, and … yeah, sorry, that’s not a thing that happened. Of course no one was going to dip below 19.7, but in this afternoon’s session of dressage at the 2019 Mitsubishi Motors Badminton Horse Trials, several key combinations made big steps in the right direction. For a recap of all this morning’s action, click here.

For all we teased Tom McEwen for serving up some train conductor realness yesterday, today he gave us absolutely nothing to giggle about. His test with Toledo de Kerser earned him a 24.7, which is the rider’s best-ever dressage score at the CCI5*-L level. It’s also very nearly an all-time, all-level PB for the horse – only his Blenheim CCI4*-S result in 2016 eclipses it on 24.4.

“I’m delighted with him, he was awesome in there,” he beamed. “I couldn’t have asked for anything more, I just tried not to mess anything up!”

Tom rated the extensive walk sections as one of his highlights of the test. “It sounds a bit stupid to say the walk, but it was brilliant, and much more productive than it has been. We know he’s got a good canter, and we know he’s got a very good trot, but today it was all there. The consistency is a highlight, too – we’d maybe been lacking that for the higher marks before.” 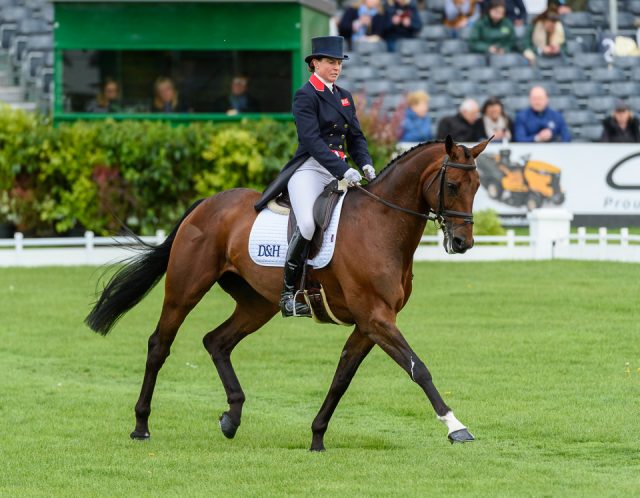 From one five-star to the next: Piggy French struts her stuff with Vanir Kamira. Photo by Nico Morgn.

Vanir Kamira scored a 25 here last year, so her sterling 26 today wasn’t wholly unexpected – but despite that, “we don’t see the mid-twenties very often!” laughed Piggy. Like leader Oliver Townend, Piggy is freshly back on terra firma after a successful trip to Kentucky, where she finished fourth with her WEG mount Quarrycrest Echo. In the meantime, her sister Nini, herself an eventer, has been keeping Vanir Kamira in peak condition – not, as it turns out, an easy prospect.

“She’s done an amazing job of keeping her going in every way. She’s not easy – she’s a hot, blood little mare, and there’s always a fine line with her,” explained Piggy. That touch of mercurial mareishness is what pushes her ahead of the competition but, as Piggy tells us, it can also be her downfall. 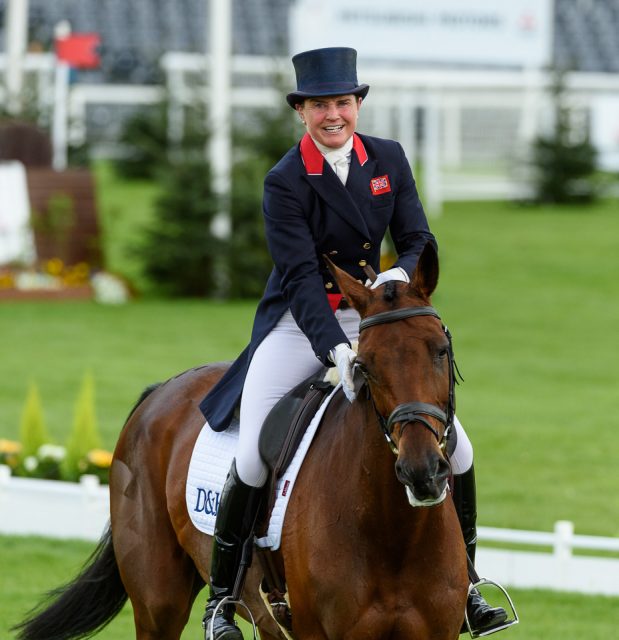 “She’s quite an insecure horse and she always feels quite hot and a bit distracted here, even just walking from the stables. But then she goes in on her own and lets me ride her – her ears stand pricked and she kept that presence in that character, which we all know isn’t always easy to do!”

For Piggy, this is the perfect starting point as she looks ahead to this weekend’s challenge, which will, as she puts it, ‘get the cogs whirring’. “If someone said I could have another go at today I’d smile and say no thank you!” 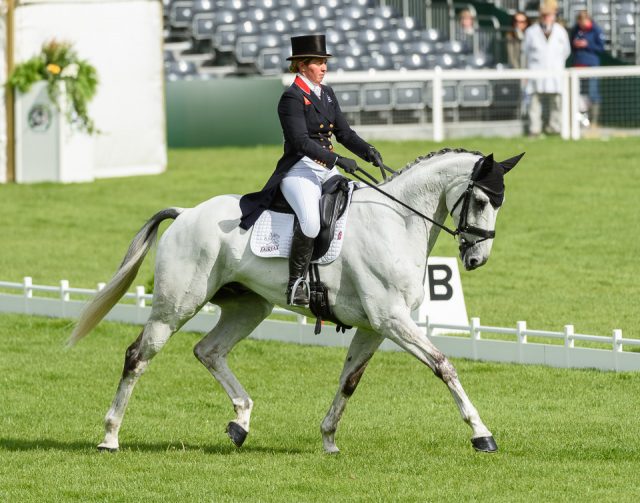 It seems like a flagrant falsehood to say that Kitty King hasn’t competed at Badminton in nine years, but somehow, it’s not – she last appeared here in 2010 riding Boondoggle. Although she had to withdraw one of her two intended entries the other, Vendredi Biats, started in fine style today, putting a 27.2 on the board for overnight fourth. The striking grey ten-year-old can be a tricky ride in this phase, flitting between bargain-basement, section-leading sub-30s and also-ran marks when spookiness sets in. Today, it looked as though it might veer to the latter – ‘Froggy’ shied violently at one of the ring-side cameras, and a battle of wills ensued as Kitty tried to get him back in hand. But it worked: their test was flowing and full of just the right kind of joie de vivre, and as Kitty rode back out of the ring, we were gifted with our third recreational weeper of the day.

“That was a relief!” she laughed. “I’m delighted with him – it’s his first time here, he’s only ten years old, and it’s the first time he’s got all his changes in a test … to do it at Badminton is really something. When he spooked at the camera I thought ‘oh god – I’m going to get bucked off!’ He’s not the easiest, and he can get a bit cold-backed, so every time he went past the camera he went tight. He likes to whip round in a test, and he has done before, but he’s been going so well in training tests that it was nice for him to come out and stay that consistent.” 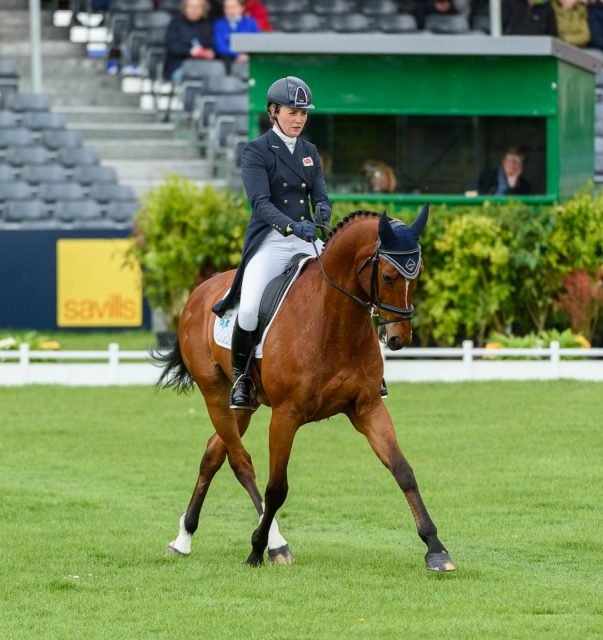 We saw a Badminton debutante make a decisive first step in her Badminton quest today, too: Millie Dumas finds herself in fifth place overnight with the fourteen-year-old Artistiek after a quality 27.3 test. Interestingly, we saw a 9% difference between the judges at M and C, with the M judge awarding her fewer good marks for her test, precluding a higher overnight placing.

Nevertheless: “I’m over the moon with that! He’s been wild this week, so I was a bit worried. But he’s an older boy now,” said 27-year-old Millie. “It’s quite intense in there – it’s very quiet when you go in and everyone’s eyes are on you, but I just tried to treat it like any other test.”

Fortunately, any nerves Millie might have felt as a debutante were mitigated by the fact that her horse requires all her concentration. “He’s really cheeky and extremely spooky – he doesn’t give you a huge amount of confidence at home, but in the ring he doesn’t look as much at things. He’s a little rubber bouncy ball – he’s small, only about 16hh, and he’s short-coupled, with a hell of a lot of power.” 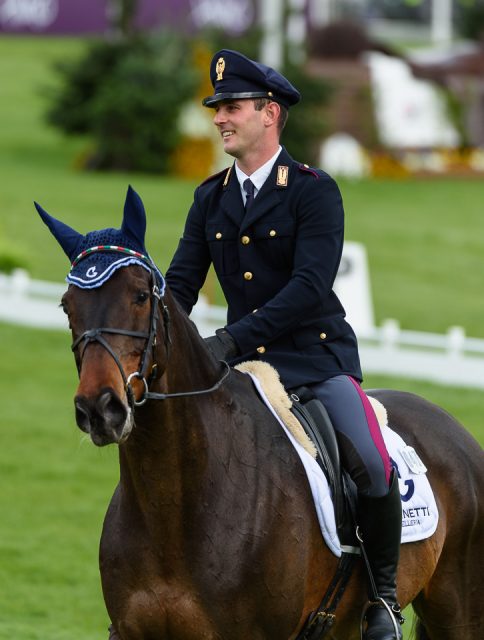 Pietro Sandei and Rubis de Prere. Yes, we were distracted too. Photo by Nico Morgan.

The final new addition to the top ten was Italy’s Pietro Sandei, who scored 30.6 with Rubis de Prere. Pietro, who’s a policeman, made his Badminton debut in 2017, but this is a debut for the horse.

“The first impression was so good – I love this place, this arena,” he said. “For the first time in his life he had a bit of tension, but I hope that Saturday will be the same – a little bit of extra excitement. We’ll do our best and hope it ends well.”

And that’s that for day one of dressage at Badminton – we’ll be back first thing tomorrow with lots more action. Here are our picks to keep an eye on in the first session tomorrow:

Keep an eye out, too, for our first US rider – Jenny Caras and Fernhill Fortitude will head down the centreline at 10.34 a.m. BST/5.34 a.m. EST. Catch you on the flip side, gang. 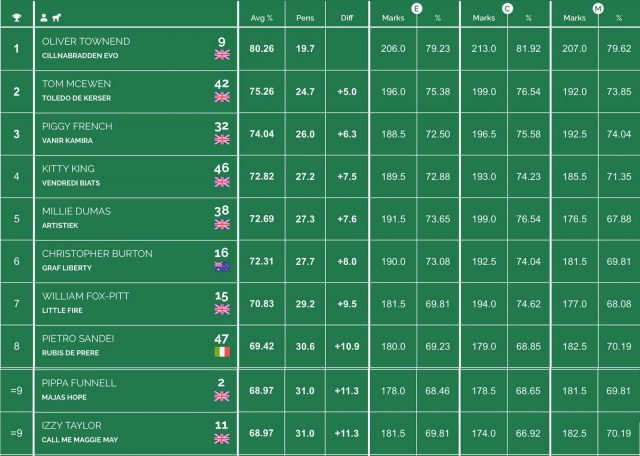 The top of the leaderboard at the end of the first day of dressage.