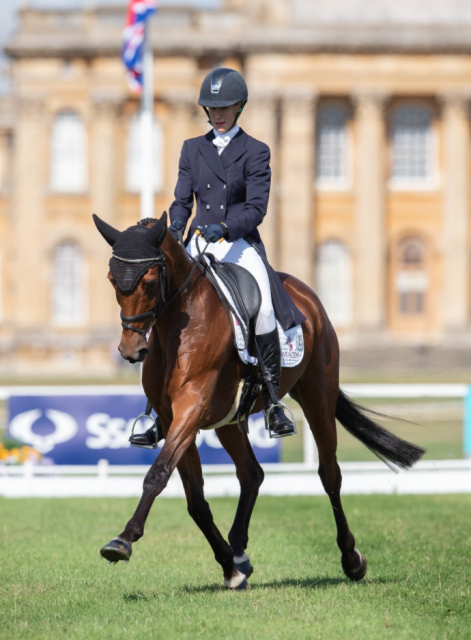 It was another show of consistency between the boards for Bella Innes Ker and her 14-year-old Hanoverian Carolyn today as they posted a 24.4 to lead the CCI3* at Blenheim overnight. They come to Blenheim off the back of a fourth place finish in Blair Castle’s CIC3* and, having finished 15th here last year, they’ve got their sights set on bigger things this time around.

“She’s on amazing form,” says Bella. “She’s a smart dressage diva on the best of days, so it’s nice when you can go in there and get a goodie. It can be hard when you’re on a great dressage horse, because sometimes you expect a result and don’t quite match it, but I’m delighted that it all worked out today.” 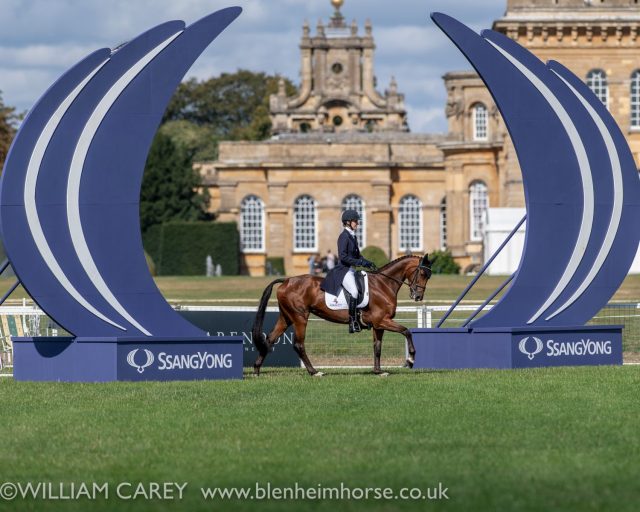 This is a longtime partnership for Bella and the mare, who is owned by Bella’s mother, the Duchess of Roxburghe.

“We call Carolyn ‘Princess’ at home — sometimes it’s her way or the highway, but I’ve learned how to do things her way. If I please her and do it by her system, then she’s great.”

Was so glad to be able to get off the sofa to go watch @pipfunnell and Squirrel at @blenheimhorse do a beautiful test for 26.7 🤞🏼 for the rest of the weekend! @frankidoodle14 always making him look gorgeous 😍

Pippa Funnell and MGH Grafton Street produced yet another impressive test, posting a 26.7 to sit second overnight. The 10-year-old gelding, who was sourced and produced by Ireland’s Padraig McCarthy, hasn’t been the most straightforward of Pippa’s rides, but he’s an undeniable talent: He finished fifth in this class last year, adding nothing in the second phase, and he’s a graduate of the eight- and nine-year-old class, too, finishing 18th in 2016. This season, he’s had two clear CIC3* runs — at Chatsworth and Hartpury — but has had problems on the cross country course at three of his international runs. This is a course that the horse has proven form over, though, and Pippa will likely push for a confident clear round to end his 2018 campaign on.

Holding third place on 29.4 is new kid on the block Amanda Ross, who has made the journey over to the UK from her native Australia with Koko Popping Candy. Amanda, who competed at the 2000 Sydney Olympics, isn’t short of experience, and she and the ex-racehorse have clocked up an impressive resume on their home turf. In their last nine internationals, they’ve never been out of the top five, and they’ve completed each of their seventeen starts without any cross country jumping penalties bar an 11 penalty blot for activating a frangible pin last season. This is the pair’s first international outside of Australia.

Kitty King and Vendredi Biats were reliable as ever in this phase, scoring 29.6 to slot in at fourth place on the tightly-bunched leaderboard. Last year, they faulted at the incredibly influential 18th fence on course, but they’ve posted top five finishes in Chatsworth’s CIC3* and Bramham’s CCI3* this season. They come to Blenheim off the back of a forgettable Hartpury — they picked up 20 penalties and dropped to 63rd there — but the eye-catching Selle Français has proven time and time again that on his day, he’s remarkable: he’s been in the top 10 in 15 of his 21 internationals. 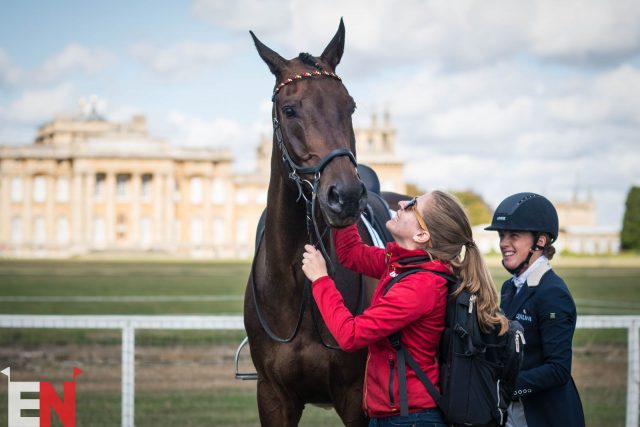 Pats all around: Hamilton 24 makes Plan B a top option for Josefa Sommer. Photo by Tilly Berendt.

Josefa Sommer and Hamilton 24 made a positive early impression in what has generally been considered a harsh-marking day, posting a score of 29.7 to take fifth place overnight.

“He was good, and very relaxed, which is good for him — in Aachen, he was very nervous,” says Josefa of the 16-year-old Hanoverian. The pair were first reserves for Germany’s formidable WEG team, and though the disappointment of not making the trip to Tryon stung initially, Josefa’s outlook quickly changed on arriving at Blenheim with her homebred gelding.

“I’ve never been here before, and wow! I hacked out this morning and I just couldn’t believe it, it is so beautiful, just wow. The course is big, and it’s so beautiful — I think it will really suit him, and I can’t wait to go out there.”

Josefa and Hamilton have an impressive form line — they haven’t been seen out of the top 20 in an international since mid-2016, which was the last time they had a cross country jumping penalty, too. Since then, they’ve logged 16 of their 67 international starts, and Josefa, whose father Joachim rode Hamilton’s dam, Fiorella, will be a rider to keep an eye on this weekend.

CIC3*: From Le Lion to the Main Stage

We talk a lot about the career importance of a good result in Blenheim’s eight- and nine-year-0ld CIC3* — after all, previous winners have included 2017 victor Cooley Lands, who represents Australia this week at the WEG with Chris Burton. Further back, the winners’ list is a veritable who’s-who of top-level talent: Andrew Nicholson‘s Quimbo won in 2012 and went on to take top honours at Kentucky the following spring, William Fox-Pitt‘s Oslo took the title in 2011 and then won his four-star debut at Pau a month later, and Mark Todd‘s NZB Land Vision was victorious in 2010, clinching Badminton the next season. Jonelle Price‘s Luhmühlen winner Faerie Dianimo was a winner here too, rising to the top of the leaderboard in 2014. Since its inception in 2009, the class has been eventing’s Magic Eight Ball, predicting with almost frightening accuracy which young horses will go on to make big waves.

But when looking at what is essentially an age class, it’s just as valuable to look back as it is to look forward. As in every other year, many of this year’s competitors are graduates of the Young Horse World Championships at Le Lion d’Angers, which hosts a CCI1* for six-year-olds and a CCI2* for seven-year-olds. Following on from British Eventing’s four- and five-year-old national classes, you can start to neatly sew a piece of string through the form of these talented horses and, insomuch as you can predict anything in eventing, you can get a pretty good idea of the cream of the crop. 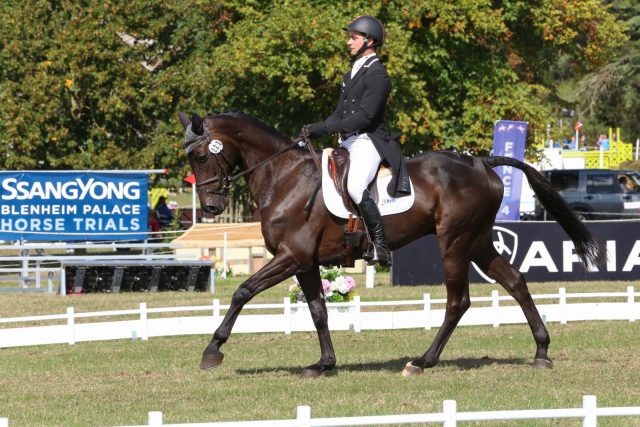 Today’s leader is one such horse. New Zealand’s James Avery piloted Vitali around last year’s seven-year-old World Championships, leading the dressage on a score of 28. This was the horse’s first CCI2*, but despite Le Lion’s intense atmosphere, he jumped a stunning double-clear around Pierre Michelet’s inventive track, adding just 1.6 time penalties to hold onto his lead. On an incredibly influential Sunday, we saw him lose the title with two poles — but his show jumping form, which was chequered throughout his seven-year-0ld year, has been considerably better this season. Today, he posted an impressive 24.2 — a personal best for the horse at any international level — to lead the CIC3* by three marks.

Blenheim is a level debut for Vitali, who was formerly piloted by Jock Paget, whose Hungerford yard, horses and major sponsors were passed over to James when Jock relocated back to New Zealand. This season, they’ve completed four clear Intermediate runs, won the CIC2* at Rockingham International, and place seventh at Tattersalls’ CCI2*, but interestingly, Vitali is yet to run at Advanced — he ran Aston’s eight- and nine-year-old Advanced as a combined test. But don’t go scrambling for your rule books — he is, in fact, qualified for CIC3*, which only requires qualifying results at Intermediate and CIC2*. Baffling? Yes, but endlessly muddling FEI rules aside, that’s no good reason to discount this pair.

“I’m really pleased with him; he was pretty focused and he enjoys his job, so I was able to go in the ring and do what we’ve been practising at home, which is always a good feeling. He’s been going really well, so I’d hoped we could produce a test that reflected that,” says James.

Despite Vitali’s inexperience at the level, James remains confident about the mammoth task ahead: “He’s a good cross country horse, so I haven’t been too worried about that bit. He went well at Tattersalls, and from that I learned that he needs to have two steady runs before a big event, because he just loves it so much. He loves his job and loves working, but he can be cheeky — he likes to make sure you’re switched on, and he can be quiet as anything one second, and the next second he makes you work for it.”

Since losing the seven-year-old title in the final phase, Vitali’s showjumping record has been on the up and up — this season, he’s recorded more clears than otherwise, though an atmospheric arena like Blenheim’s could still be a factor in his success here.

“He’s not had a lot of experience jumping in a big atmosphere, so sometimes he goes in and gets a bit distracted by things. That’s what got him at Le Lion. But you can’t protect him — you have to dare him a bit more, and ride him like a jumper. The more you dare him, the harder he tries.” 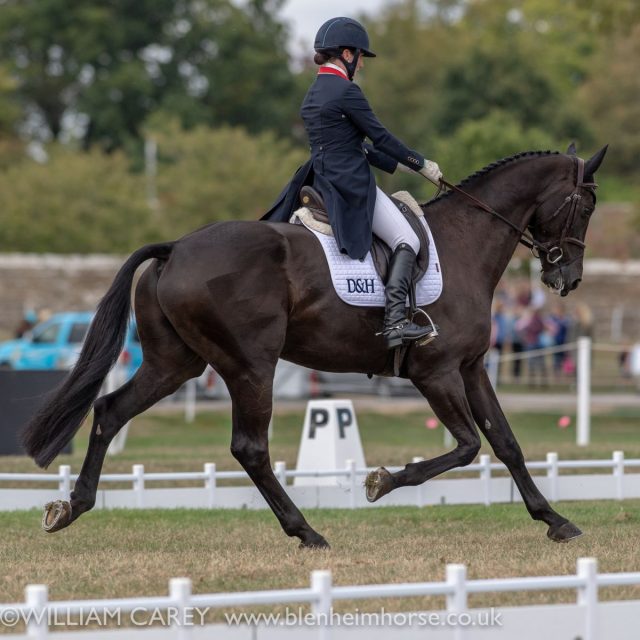 Laura Collett currently sits in second place on 27.2, despite an error of course in her test with Dacapo. The nine-year-old gelding has only had seven international starts, but he’s racked up considerable experience in those starts: he was sixth in Houghton’s CICO3* in May and came ninth in his Event Rider Masters debut at Barbury. His score today is a personal best; he’s consistently a point or two above this, but Laura has developed something of a reputation for eking out the best in her horses in this phase.

In third place, Pippa Funnell made a second appearance on a leaderboard today, posting a 27.7 with Maybach in his second appearance at the level. Pippa took over the ride last season from Sweden’s Hedvig Wik, and has since produced some promising results with him, including second in the CCI2* at Tattersalls.

“He’s everything I’ve ever wanted in a horse,” said Ben Hobday after his third-place finish at Blair CIC3* with Shadow Man, and the dream certainly didn’t die today: the pair scored 28.1 to sit fourth. Shadow Man is another Le Lion graduate — he finished 10th last year, and has since made his first team appearance, coming 16th in the Nations Cup at The Plains. 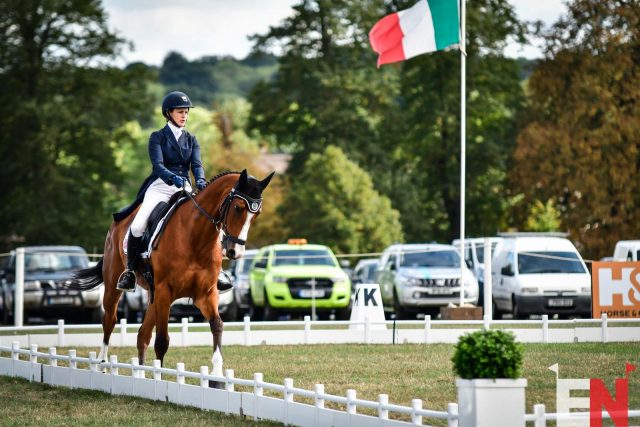 Five marks behind James and Vitali there’s a three-way tie for fifth place: Millie Dumas and Fabien, Italy’s Vittoria Panizzon and Super Cillious, and sole US representative Katherine Coleman and Monte Classico all scored 29.2 to share the spot after the first day of dressage.

For Katherine and her talented nine-year-old, this class has been a season-long target. The pair was given the call-up for the second-placed US team at Houghton’s Nations Cup in May — there, they added just 1.6 time penalties across the country and 2 time penalties in the showjumping to their dressage score of 33, despite the fact that it was the horse’s first run at the level. But it’s been the first phase that has historically precluded them from earning higher placings — the German sport horse, who Katherine sourced from Bettina Hoy, tends to be a mid-30s scorer. 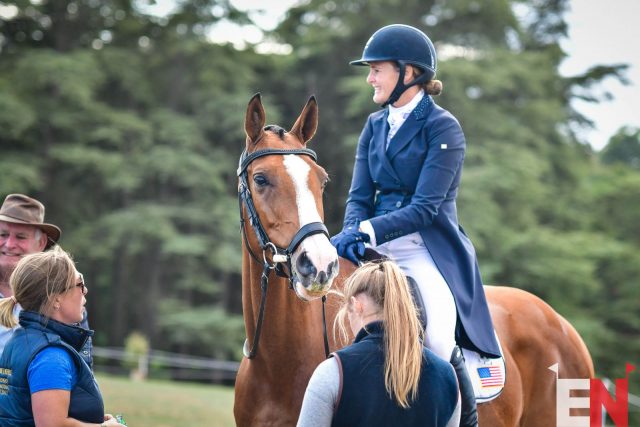 “I’m really excited about his test, because I feel like that’s actually where we’re at and really was the best we could do,” says Katherine. “He’s a little bit green in his changes, but he did them both today and got an 8 for one of them, so I’m thrilled. What’s so exciting is that there’s so much more to come – this is just barely scratching the surface. He’s such an amazing horse, and I’m so lucky to have him. I’m excited to hopefully do him a little bit of justice this weekend.”

We’ll be back with loads more dressage action from Blenheim tomorrow: stay tuned!