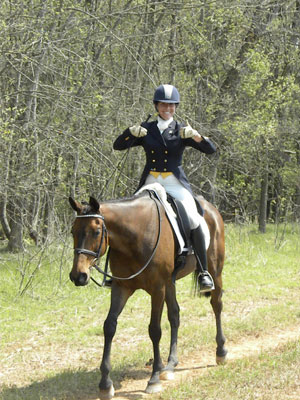 Because I love this girl, her positive attitude, and her pain in the butt way of making me want to run ridiculous races, I decided to use a picture of her. Here’s to giving your day a big thumbs up.
One week from today, we get to celebrate thanks. Celebrate by stuffing our faces, watching football, and lying around just enjoying the company of each other. Well at least in my family. And then there comes Black Friday. Now, I love to shop, but I’m not about to get run over at the Walmart entrance just to buy my friends a Christmas gift. However, I do thoroughly enjoy watching people clip coupons, map routes, make schedules, do push ups and just generally prepare for Black Friday. How do you give thanks, EN? And how do you honor Black Friday?
Well the word is out- there is a record number of countries expressing interest in hosting the 2018 World Equestrian Games. Expressed interest has come from Morocco, Hungary, Australia, Canada, Russia, Sweden and the USA. [WEG 2018] The 2010 WEG drew 507,000 spectators with 40,000 on four separate peak days. And as always, it’s good to see these games getting some public recognition. [Canada]
For some time now, the FEI has worked to create a more democratic organization. The FEI has now created a Constitutional Task Force made up of representatives entirely from National Federations. In effort to maintain complete transparency, all documents form the task force will be made available on the FEI website. For more on the task force, the representatives and documents, please go HERE.
Would you strip down for charity? These girls did! A group of students from Leeds University Equestrian Society got straight into their undies to raise money for charity. The girls were hoping to raise 1,000 GBP for the Otley and District Riding for the Disables charity. They did more than raise money. They have also become official mascots for soldiers over seas. How far would you go for charity? [Hot to trot]
Eventing Radio Episode: 168 with Gill Watson and Denny Emerson’s tribute to Dr. Mary Alice Brown
Don’t forget that big things are happening down under. Adelaide is coming to life with a record 35 entries. This is also the first time Adelaide has been part of the HSBC FEI Classics series.  Click here for more at Adelaide. [Adelaide record entries]
What someone probably thought was a good way to traffic drugs, ended up a big fail. Please folks, keep your drugs out your saddle. Recently a saddle stuffed with 5 kilograms of cocaine was intercepted by police in Georgia. The two individuals with the saddle were arrested for drug trafficking. [Don’t do drugs]
Meet the artist who brought War Horse to life
Morpurgo’s myth revealed:
Where ever you are today, give people a big thumbs up- just because. Go eventing.