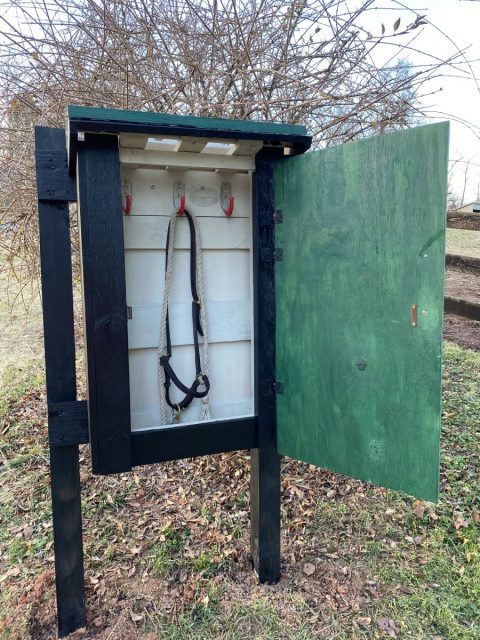 A home for halters! Photo by Kate Samuels.

It’s Christmas Eve, and I am unreasonably happy with my early gift from my dad, a custom built halter home! My bad ponies love to lean over the fence and gnaw on their halters and leads early in the morning while they wait impatiently for me to bring them in, and I hate nothing more than a soggy halter when it rains overnight. Hence, the halter house! Keeps them safe and dry, and looks pretty cool too. Thanks dad!

Those who follow eventing might remember the moment Chelsea Kolman’s reins broke during her show jumping round at the 2016 North American Junior and Young Rider Championships in Parker, Colorado. But that’s hardly the most exciting story from this longtime partnership between Chelsea and the unlikely eventing champion. Dante failed his training to be a police horse twice, and then went through nine trainers in the sport horse world before finding Chelsea. [An Eventer’s Journey with Her Forever Horse]

Don’t forget to enter this week’s giveaway of Stride Control, by Jan Marsden Hamilton – a Fab Freebie brought to you by Horse & Rider Books. Click here to enter.

Flash back Friday to Phyllis Dawson competing Albany II at the 1988 Olympic Games in Seoul. “An experience of a lifetime,” Phyllis Dawson described of her time competing at the Olympics. Dawson and her horse Albany II were the highest placed U.S. pair and finished 10th individually in the Seoul Olympic Games. Before her exceptional performance at the Olympics, Dawson first made her international debut at Boekelo CCI3* (now CCI4*-L) on Mountain High in 1985. Two years later, she placed second at the Chesterland CCI3* on Albany II. The following year, in 1988, she and Albany II placed sixth at the Olympic Selection Trials held at the Kentucky Three-Day Event. [Memories From The Vet Box with Phyllis Dawson]