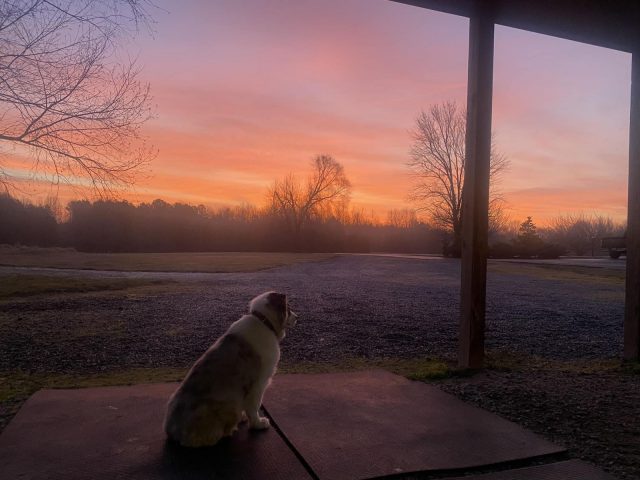 Just a pupper watching over the barn. Photo courtesy of Christine Price Ruffin.

Last week, we were all freezing our butts off and breaking ice out of buckets in Virginia. This week, my horses went out naked overnight (big mistake, much mud), and I’ve been sweating in a t-shirt. Honestly, I don’t know if it’s quite as unpredictable in other states, or if Virginia just has to keep us on our toes, but it’s a wonder we survive any of it. Florida next year, I keep telling myself.

One more week before you see scores here!!!

A USEA year-end honor was never the specific goal, but it came about organically as Donna Miller checked off each box on her training list with her Connemara stallion, Coud’Poker Tartifume. On a rapid ascent from unstarted 7-year-old to FEI two-star competitor in three years, “Cooper” ended 2022 by bagging the Theodore O’Connor trophy as the Smartpak USEA Pony of the Year. “He’s like a little sports car. He’s amazing on cross-country,” she said. “We can make time because he is not only fast, but as I walk the course, I look for shortcuts. We can literally come off a turn, sit up and jump without a huge set up. He’s really quick and has really figured it out. I had to learn how to go with it and trust.” [USEA Pony of the Year]

What are your “riding pain points”? Noelle Floyd’s Equestrian Masterclass is gearing up for some new content this year and wants to know what you want to see. [Take the Quiz]

Perhaps one of the most quoted lines from The Princess Bride — and there are many, so that’s saying something — is Iñigo Montoya‘s response to Vizzini’s overuse of the word “inconceivable.” In the equestrian world, we find ourselves thinking this A LOT. There are a ton of terms that equestrians — or wannabe “equestrians” — use on a regular basis that don’t quite mean what they think it means. [I Do Not Think That Means What You Think It Means]

Best of Blogs: A Horse By Any Other Name

Best of Blogs Pt 2: The Connecting Power of Talking About Hard Things

Acquiring a working student position is a rite of passage for serious equestrians. I learned more in my year of working for a 5* eventer than ever before, and formed life long relationships. Becoming a working student is an exciting step in a young equestrian’s riding career. These positions provide great opportunities to learn both in and out of the saddle. As in any new job you may be a little nervous at first, so BarnManager came up with some helpful suggestions. [Top Tips for Being a Working Student]