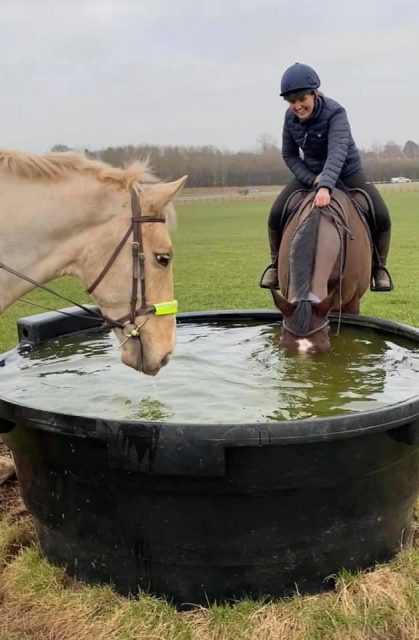 You never really know how much you’ve missed the sunshine until you get a week of proper spring weather, and you feel like a weight has been lifted from your shoulders. I live on a dirt road, so luckily I can walk and trot down that when the weather and footing are crummy, but it’s really unreasonably exciting to be able to do other activities. And in a t-shirt! Those of you who stayed north for the winter will appreciate this moment.

Tokyo Olympics have yet to confirm the status of spectators for the Games later this year. The new president of the Tokyo Olympic organizing committee stopped short of saying there would be no foreign fans at this year’s Games, but she certainly hinted at it Wednesday after online talks with IOC president Thomas Bach and others. The Japanese newspaper Mainichi reported Wednesday that the decision had already been made to exclude foreign fans. It cited only unnamed sources “involved in the discussions.” [Will There Be Spectators at the Olympics?]

Five-star eventer Kim Severson taught a show jumping clinic in January at Milestone Sport Horses where she instructed riders on the importance of forward riding for successful jumping. In this exercise, which Kim progressively adds additional pieces to, riders are instructed to focus on the quality of their canter. For one pair, Kim encourages the rider to add more leg to help the horse maintain his impulsion to the fences and focus on riding accurate lines for straightness. For a second pair, Kim instructs the rider to use a half-halt or transition to trot between the fences to reestablish control and balance. [Video Break with Kim Severson]

Hunter legend and horseman of a century Kenny Wheeler passed away this year at the age of 93. Kenny Wheeler defined breeding and training hunter horses for decades, and was well known as a literal living legend. COTH brings us this look back at an interview on his farm in Keswick, Virginia from 2012. [RIP Kenny Wheeler]

Billy Jackson was introduced to horses at a young age through his local 4-H program. As an adult, he is a Marketing Project Manager, and when he’s not at work, he’s a lower level eventer based at Poplar Place Farm. The volunteer coordinator of Poplar Place says, “He volunteers at every show he’s not competing in, and even then he’s happy to jump in as time allows,” she praised. “He scribes, does cross-country start and finish, and we’ve trained him to score in the office when our usual person was sick. He’s super dependable and the right combination of easygoing and meticulous. His only special request is he get out in time to go ride his own horse in the afternoon. We’d be lost without him as a volunteer at Poplar Place Farm.” [USEA Volunteer of the Month: Billy Jackson]