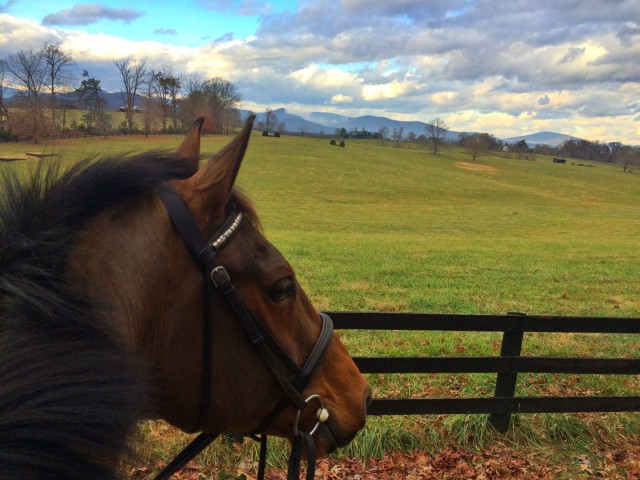 I’m a big fan of the November and December vacation for my horses, and I think it’s a big part of why they come out refreshed both mentally and physically each spring. However, both of the boys that I have right now don’t particularly enjoy full vacation, so they go on half vacation status. If you don’t touch Nyls for one week, never mind one month, he literally starts tearing things off the walls with his teeth and destroying fences and jumping out….so we’ve compromised and turned November and much of December into hacking, exploring, trotting and gallivanting time. This seems to work for him, as he still gets attention, maintains a reasonable amount of general fitness, but only has to do stuff like four or five days a week.

Yesterday, while leading Nyls in from the field (read: being dragged on the general direction of the barn) he encountered a collection of poop piles which he deemed appropriate to use as cross country jumping practice. As I was dragged forward and lurched into the air, I considered that perhaps he is done with half vacation time. Back to work baby head!

Was Eight Belles’ breakdown after the Kentucky Derby a predictable tragedy? Pedigree analysts are worried about the quality of the thoroughbred breeding process, and say that Eight Belles shattering both of her ankles was closely related to her bloodlines. As the thoroughbreds are created more for speed and less for longevity, what kind of animal are we creating? [Eight Belles Breakdown Predictable]

Mark Todd: the man, the myth, the legend. The Swindon Advertiser goes in depth with the venerable Mark Todd in his yard in Swindon, England. How did Mark get his start riding? How did he rise to fame? Why did he return to the sport after retiring and becoming the horseman of the century? Click here to find out! [In Depth With Sir Mark Todd]

How fit is your farrier?? Send a pic to Horse & Country to enter your farrier for the contest! Note: for all Americans, we aren’t talking about physical fitness, we are talking about hotness. Also, make sure you have your farrier’s consent before posting a saucy photo of him all over the internet. [How Fit Is Your Farrier]

There’s nothing about this video that I don’t love.