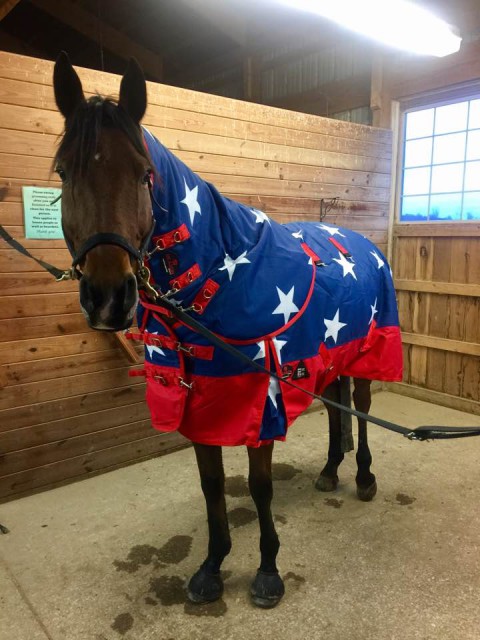 When your dad, the combat vet, picks out your heavyweight. ‘Murica. Photo by Jenny Smalley.

I’ve recently gotten enough time to go out Fox Hunting again, which I don’t usually do in the winter. Mostly, I’ve just always had horses that were nut bags and totally not suitable. One time, I took Nyls on a walk and talk with a small child student, and he spent the entire 2.5 hours running backwards, sideways, rearing, bucking, sweating, frothing, prancing and dancing. It was horrible. My giant red dinosaur, however, thinks that group trail rides are great! I’m pretty sure thats what he thinks hunting is about. You just blindly follow the horse in front of you, and then sometimes you stand around and the humans pass around beverages, right?

Savannah “Woodge” Fulton is this year’s recipient of the Amanda Pirie Warrington Grant. At only 20 years old, Woodge has been competing the 13-year-old thoroughbred, Captain Jack, at the CIC3* and CCI3* level all year. They were 7th together at Bromont CCI3* and ran a double clear cross country round at Fair Hill CCI3* this fall. She will receive $5,000 to help offset some of her training costs as she continues her path to hopefully one day represent the US in international competition. [Woodge Fulton Wins Amanda Pirie Warrington Grant]

If you’re trying to work your horse with long hair this winter, you’re constantly faced with how to help him dry out. Horses are designed to dry their bodies by using body heat to push the moisture out to the tip of the hair, but when they’re super sweaty or wet from rain, they lose the ability to do this, and just stand around burning calories being cold. Certain kinds of coolers are better than others, and certain methods are definitely more effective and quick than others. [Dry Your Damp Horse in Winter]

Kentucky Equine Research is offering $15 off any order over $100 on shop.kerx.com through the month of December. The promotion includes ClockIt heart-rate monitors, which only going on sale this time of year. Heart-rate monitors make great stocking stuffers for the techy equestrian on your Christmas shopping list! [shop.kerx.com]

Hot on Horse Nation: 7 Things Our Horses Do That Will Never Not Be Adorable

Everyone else in the “real” world is all excited about the holidays and the possibility of snow. All equestrians can think of is how depressing it is to keep waking up when it’s pitch black outside, don 34 layers of clothing, and trudge through the inevitable upcoming months of mud to retrieve equally muddy horses. [Tis The Season To Be Jolly]

Shout out to my neighbor Reynolds Cowles for being named the President of the American Association of Equine Practitioners (AAEP) this week. Dr. Cowles is famous around these parts, and we’re so proud that he’s getting the recognition that he deserves as a long time sport horse practitioner. Founder of Blue Ridge Equine Clinic in 1979, and deeply involved in both the Thoroughbred racing community as well as the sport horse world that is so richly available in central Virginia, Dr. Cowles brings a lot of good experience to the table. [Reynolds Cowles Named AAEP President]