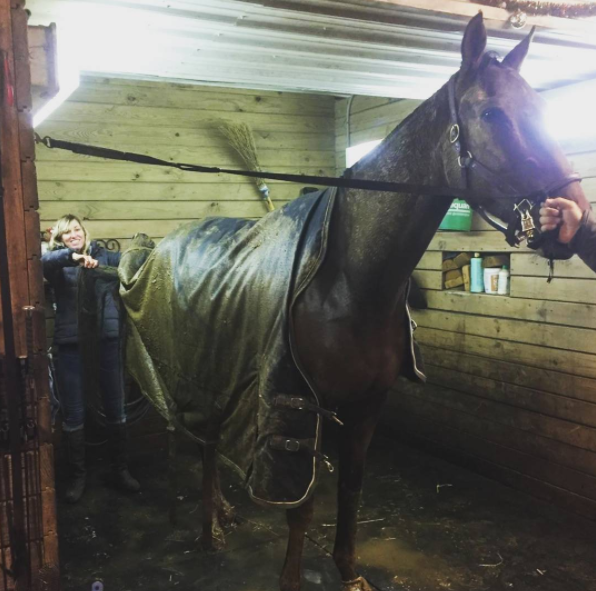 When the baby horse gives the trainer the gift of being a pig pen for Christmas. Photo by Bryn Byer.

Sometimes the warmer temperatures around this time of year feel like a relief after the first cold snaps of the season…and sometimes those warm fronts bring their frustrations in the form of mud. Everywhere. Thinking about clipping because the days are warmer? Too bad, you’ll spend the entire day rinsing off horse hooves and blankets instead of giving anything a proper bath and clip. Thinking about tacking up quickly? Forget it, you’ll spend 20 minutes trying to brush mud out of the hair between your horse’s ears. They’ll end up with mud in places you never believed could have mud. Aiken cannot come quickly enough!

It takes a really special horse to go from a winner at Royal Ascot to a high level para dressage mount. With Julie Frizell, a Grade IV British para rider in the irons, Namibian has done just that, qualifying for the championship twice in two years. The 17.2 hand son of Cape Cross won the classic Queen’s Vase at the Royal Ascot in 2011 before becoming part of Godolphin’s rehoming program. [From Royal Ascot winner]

Have you ever sat on a horse and just clicked with them? Blogger Paige Cade recently went to Frankfurt on a whim, part vacation and part wishful shopping. Knowing she couldn’t really fund the horse she was about to try, she tried to talk herself out of it the entire drive to the stables. She tried to find any fault with him to find a reason to walk away. After wistfully posting the video of him on social media, a couple of generous clients offered to become investors, and a dream became reality. [Unicorn Found]

A foundation in honor of Olivia Inglis has been established in New Zealand. Olivia tragically died earlier this year in a cross country accident, and Equestrian NSW created a scholarship fund to further the training end education of  young eventers. The fund raised over $167,000 and so a foundation was formed to manage the trust, with the added goal of investing in high-impact safety initiatives. [Olivia Inglis Foundation Established]