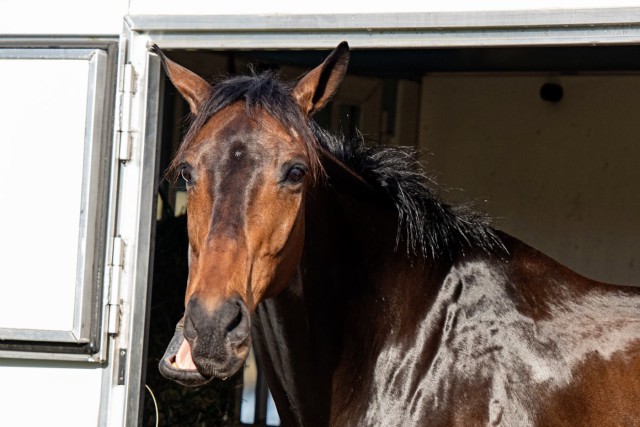 Donner. I can’t even with this right now. Photo courtesy of Lynn Symansky Equestrian.

I know discussions about the weather are so boring, but seriously I can barely deal right now. Yesterday we had thunderstorms/tornadoes/hail and also it was 75 degrees. You heard me, 75 and hailing. WHAT?! At Days End Farm Horse Rescue in Woodbine, Maryland, they had wind so bad that it flipped their big trailer flat on its side. Welcome to March, everybody.

The Professional Rider’s Organization (PRO) announced yesterday that they are implementing a complete rebranding for 2017. Since its establishment in 2009, PRO has contributed to significant improvements in increasing exposure and interest on the professional side of the sport in North America. Over the years, however, PRO has steadily increased membership level options to benefit more than just top athletes. The organization feels it is time now to open up the membership and become a fully collaborative voice between eventing participants, competitions and the sport’s governing bodies. [PRO Announces New Strategy for Inclusiveness]

The never ending quest to find the perfect XC shirt may finally be at an end. World Equestrian Brands has debuted their Equetech Custom Cross Country shirts that are totally customizable, and you can win one! Simply write a story in 100 words or less why you chose your particular cross country colors and email it to us along with a photo of your colors by March 3! [Show Us Your Cross Country Colors Contest]

Jersey Fresh International has announced the inclusion of FlyPups, Inc. into the 15th anniversary festivities for this year’s event. FlyPups, based in Pottersville, NJ, transports dogs from desperate situations to no-kill shelters and foster situations where they can be nurtured and prepared for placement in forever homes. As part of JFI’s schedule of events this year, FlyPups will hold a 5K run, as well as a 1K fun walk to benefit the organization’s operations on Sunday, May 14, at the Horse Park of New Jersey. Athletes, spectators and families are welcome to experience a unique perspective of spring in the New Jersey countryside as they run or walk around JFI’s Cross-Country Course, which will feature many awe-inspiring jumping challenges negotiated by horses and riders during the previous day’s competition. [JFI Partners with FlyPups for 2017]

Incredible US Olympic show jumper Cedric has been officially retired from competition at the ripe age of 19. Ridden by Laura Kraut and owned by Margaret Duprey of Cherry Knoll Farm, the 19-year-old Holsteiner gelding (Chambertin 3 x Cortina, by Carolus LL) was the “horse of a lifetime” for his rider. Kraut and Cedric were one of the most dynamic and successful show jumping combinations in US history. Cedric made his FEI debut in 2006 as an eight-year- old, and his partnership with Kraut has been nothing short of incredible. Kraut and Cedric were key members of the United States show jumping team that claimed the gold medal in 2008 at the summer Olympics in Beijing. [Cedric Retires]

Clark and his super young horse Engapore at Three Lakes in Ocala.