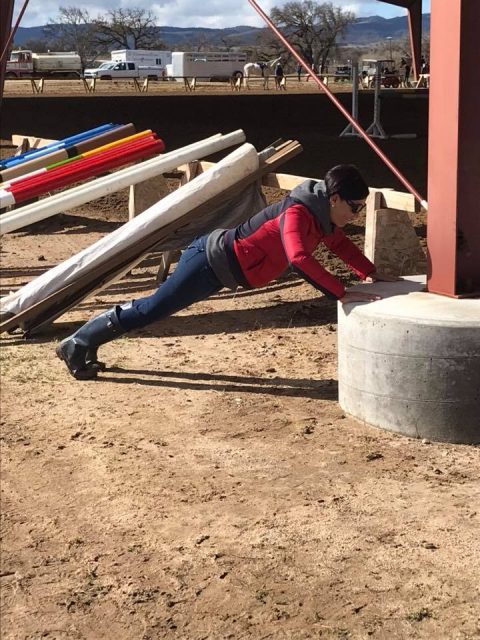 So, I entered my first local combined test this weekend with my baby TB. Don’t worry, it’s only Baby Green with an Intro test and a 2′ jump course, but it’s pretty serious. He’s very nice for the most part, but he still believes in bucking exuberantly and repeatedly when picking up the canter, and has never been in a dressage ring or honestly seen jumps away from home. So obviously, the weather forecast for this weekend is 35 and raining. And we go first thing in the morning. How do you think this is gonna go? #neckstrapsindressage

Don’t deny it, you’re fascinated with how Carl Hester keeps and trains his horses too. He is notoriously open about how his horses live their lives (mostly outside) and how he trains them from the age of three all the way through Grand Prix. He believes in lots of hacking (revolutionary for the dressage world) and keeping horses as much like normal horses as possible. [How Carl Hester Succeeds]

Roy Burek from Charles Owen gave a presentation at the USEA Convention on the differences in traumatic brain injuries (TBIs) between men and women. On the whole, women tend to suffer from increased symptoms and recover more slowly compared to men when they are in similar accidents based on data, but the cause of this isn’t known. There are several possible causes, including structural differences, societal differences, and hormonal influences. [TBI Differences in Gender]

Thanks to modern veterinary care, horses are living longer than ever, with many horses even competing at the top levels well into their late teens. The key to keeping your older horse happy is having a constant relationship with your vet, and detecting issues before the horse even knows that they’re a problem. The top concern with older horses is dentistry, but that is easily solved by having it attended to more frequently than a younger horse. [Senior Horse Health Concerns]

Hot on Horse Nation: 10 Horses Who Are Serious About Mud

For anyone who knows Trance, this is a magical video of him with his newest child, bee boppin’ around Training at Sporting Days…20 years young!!