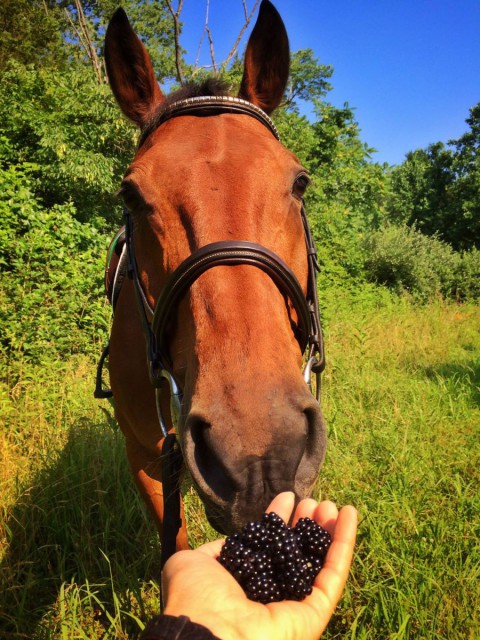 Blackberries: he loves them!!

In a lot of ways, summer in Virginia can be almost insufferable. The heat combined with the humidity makes a lot of my outdoor work days pretty gross, and when I get home at the end of the day, I can barely stand to even touch the clothes I’ve been sweating in all day. However, there are a few things sweet about summer, one of which is the berry picking season that accompanies long hacks through the woods and fields early in the morning. Nyls is especially fond of blackberries, and will eat them until his mouth turns purple and he drools sugary goo.

I’ll be the first to admit it: I’m obsessed with Jonelle Price’s Faerie Dianimo. With a stable name like Maggie May, and having competed at the 4* level very well already at the age of nine, this is a mare to contend with. It hasn’t always been smooth sailing though, as the mare had a penchant for throwing her riders and kicking out violently for many years. [Eventing Superstar Faerie Dianimo]

Andrew Nicholson is aiming Avebury at the upcoming Barbury CIC3*, where they’ve named a jump complex after the indomitable grey gelding. The pair have won the event for the past three years running, and after Avebury had a chip removed this spring, Andrew has confirmed that he’s fit as ever and ready to acquire his fourth consecutive Barbury trophy. The Swindon Advisor went in depth with Andrew about his career, Avebury, and of course, his current controversy with the New Zealand team. [In Depth With Andrew Nicholson]

Since coming out on Tuesday with the sad news of his cancer diagnosis, the internet has exploded with support for Ben Hobday. For even those not well acquainted with Ben would have a hard time not enjoying his personality as he Instagrams videos in the Burghley lap of honor, and shows his undying love for fashion in the trot ups. Many people on social media have been posting well wishes with hashtags of #kickingcancersbutt, #HobdayMyHero and #yehboi, a personalized Ben hashtag. If anybody can do it, you can Ben! [Kicking Cancer’s Butt with Support from Millions]

What Grand Prix Dressage horse pulls a “Runaway Bride” every once in a while? In COTH’s newest edition of Behind Stall Doors, we get to know Shelly Francis’ Doktor, a quirky little German gelding who is more than a little skittish and feisty. His habit of bolting came from a bad experience with a dummy when he was being started in Germany, more on that in the article. [Behind Stall Doors: Doktor]

Thinking of being a volunteer for Rio 2016? Because why not! The Olympics are now taking applications for volunteers for the opening and closing ceremonies, which is certainly something that you could write home about. [Rio 2016 Volunteers Needed]

OMG. The cuteness. It kills me.