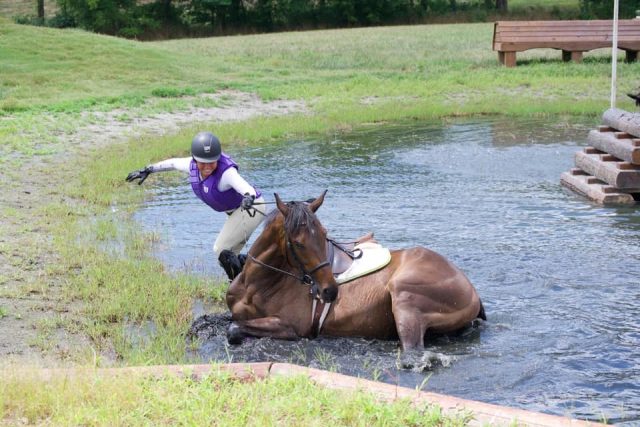 Tina Cook is one of Britain’s most successful event riders, with a numerous wins, placings and team call-ups to her name, including individual and team bronze at the 2008 Beijing Olympic Games, followed by team silver at the London 2012 Olympics. Looking back to 2008, Tina remembers being a late call up to represent her country in Hong Kong aboard Miners Frolic. Doing dressage at 10pm due to the heat, completing a tricky cross country course, and jumping her way up the leaderboard to individual bronze, Tina and Henry had a magical trip. [Tina Cook Reminisces]

Hot Take: Why Dressage Is Like The Great British Bake Off

Allyson Felix, one of the most decorated athletes in women’s track and field, has announced plans to pay it forward with a new partnership that will cover childcare costs for mothers participating in the Summer Games. The mother has teamed with her primary sponsor, Athleta, and the Women’s Sports Foundation (WSF) to launch The Power of She Fund: Child Care Grants. The program will commit $200,000 to childcare costs for nine mom-athletes competing and participating in the 2021 Olympics in Tokyo. [Girl Power]

International equestrian judge Helen Christie, of Waikaia, is off to her sixth Olympics, where she’ll officiate as the chief steward at the eventing for the first time. She previously worked Sydney, Athens, Hong Kong, London, and Rio, but being the chief steward is the highest you can go, and she’s positively delighted despite the year delay. [Six Olympics for Helen Christie]

An online public-awareness campaign launched this week takes aim at sexual misconduct and abuse in equestrian sport, and changing how these issues often are ignored, minimized or wrongly blamed on the victim. Announced Monday, the collaboration among Horse Network, the Wrigley Media Group and the Kehring family, who are involved in SafeSport and criminal allegations against show jumper Rich Fellers, has launched #WeRideTogether, a  series of  digital PSAs and an in-depth microsite designed to empower, inform, and unite the equestrian community. [We Ride Together]