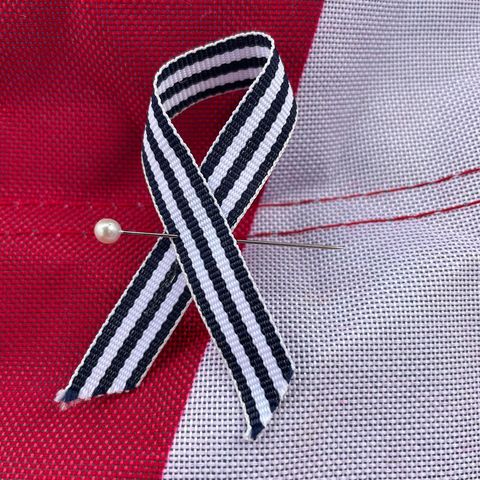 If you’re at Rebecca Farm this week, track down Jennie Brannigan or grab one at check-in and get one of these ribbons she’s made in honor of Annie Goodwin, who was preparing to compete there this weekend, and will be terribly missed. Annie touched so many lives within our sport, and was known for her vivacious smile and positive attitude. Tag EN in your photos of competition this weekend with the striped ribbon.

Time for some fast facts about The Event at Rebecca Farm! The 2019 CCI4*-L winner Jennie Brannigan returns this year to defend her title, this time with Nina Gardner’s 11-year-old Thoroughbred gelding, Twilightslastgleam. 549 riders will compete in 26 divisions across 10 levels. Novice is the most popular level with 208 riders entered, while the CCI2*-L has the most entries across the FEI divisions. [Rebecca Farm Fast Facts]

Doug & Quinn have arrived in Tokyo! Doug and Vandiver were first named as the traveling reserve but, due to Elizabeth Halliday-Sharp and Deniro Z sadly withdrawing from the team, the pair are now going into Tokyo as part of the three-person Olympic team. While Quinn doesn’t have a favorite treat, he does have some weird quirks. [US Olympic Horse: Vandiver]

Best of Blogs: Olympic Judges, Please Mark What You See, Not Who You See

We’ve had Olympic horses in Tokyo before, for the 1964 Olympics. Things were a little different then, with Australian horses coming in by ship, but some of the equestrian events were held in Baji Koen Park—the same location in which the equestrian sports will be contested this year— and Japan also provided a sprawling eventing course at Karuizawa, a forested area 90 miles from Tokyo. [Throwback Thursday: Tokyo 1064]

Brisbane has been announced as the site for the 2032 Olympics. The Australian city and surrounding South-East Queensland region were approved as the Games hosts at an International Olympic Committee (IOC) session in Tokyo on Wednesday. “Brisbane 2032 is the first future host to have been elected under, and to have fully benefited from, the new flexible approach to electing Olympic hosts,” said IOC President Thomas Bach in a statement. The approach encourages Olympic projects which make use of existing and temporary venues. [Brisbane 2032]

YouTube: The 2021 Thoroughbred Makeover is feeling closer than ever. Join RPP for a panel discussion with Makeover veterans to learn some do’s and don’ts to help the final months of Makeover preparation go smoothly for you and your horse!