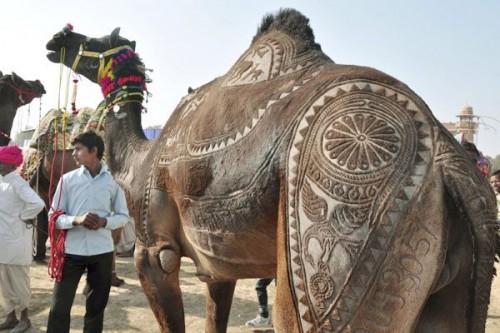 Dear EN Horse Clippers: Step up your game! (Thanks to Jaci Dryer for the tip!)

Good morning and hello Thursday! Let’s all just take a moment to gape open mouthed at the camel picture above me, and admire the ridiculously intricate clipping artwork on it’s butt. I mean, really. Do you think you have to pay more to ride a camel with a pimped out hide like that? I feel like camels probably are not the most cooperative for clipping detail oriented artwork, but maybe I’m totally wrong. Either way, that camel’s booty is fabulous.

Nope, there are no events this weekend. Instead, we have the Annual USEA Convention in Cincinnati! Today there is the USEF Eventing Technical Committee Open Forum, the Eventing Calendar Planning for 2015 and Beyond, and a Safe Sport lecture from Sonja Keating alongside a talk on Equine Welfare from Dr. Stephen Schumacher. If you’re lucky enough to be there this week and weekend, send us pictures and notes! [Convention Website] [Schedule]

Watch out Eventing world, we’ve got another Grand Prix Dressage rider on our hands. Ruth Edge, who’s always been known for her skill on the flat, just upped the ante with a fabulous debut at Grand Prix this past weekend. She scored a 69.39% at Bury Farm High Profile show, and placed second with her horse Shadowfax, who was also making his Grand Prix debut. She now joins the elite group of top level Event riders who also compete at the top levels of Dressage: Michael Jung, Ingrid Klimke and Susanna Bordone. [Ruth Edge Debuts at Grand Prix]

Do you know how to be an amazing veterinary client? We all know that we couldn’t survive without our trusted vets at our sides, assisting in our sport horse dreams. However, just as there’s a way to be a terrible boarder, there are ways to be a terrible veterinary client. How about #10: “DO have your horses caught and ready to be examined at your scheduled appointment time.” [20 Do’s and Don’t’s For Being An Awesome Veterinary Client]

In just the past two months, there have been six serious buggy accidents in Pennsylvania, resulting in four deaths. Yesterday a mother and her daughter were killed in a brutal buggy and truck accident in Mercer County. The father was rushed to the hospital with serious injuries after a truck struck the buggy from behind and plowed straight through. Be smart out there, folks, don’t run over a horse and buggy!! [Amish Death in Buggy Accident]

British racehorse trainer Gerard Butler (no, not that Gerard Butler) has been caught administering human steroids to his horses. He has been given a five-year ban by racing authorities for injecting several of his horses without veterinary assistance with an anabolic steroid. In total, nine horses in his stables were found to have traces of various drugs, and specifically an unlicensed stanozolol-based product called Rexogin, manufactured for use in humans. What an idiot. [British Trainer Banned for Five Years]