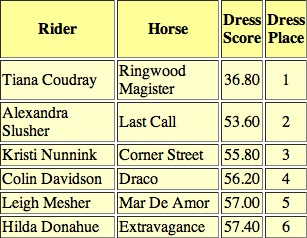 Link: Full Leaderboard
We have been talking about Tiana as a west coast rider to keep a close eye on and today you saw why.  Ringwood Magister dropped a 36.8, which was 16.8 points better than anyone else in the field.  To put things in perspective “Finian” scored nearly a third lower than the second placed ride and doubled up two horses.  Wow
There are no A or B listers in the CCI3* field, but there are several pairs from the developing riders list, including Tiana and Finian, Sharon White and Rafferty’s Rules, Olivia Loiacono an Subway, and Andrea Leatherman and the amazing Mensa.  Both Rafferty’s Rules and Inmidair are on the WEG application list.
Update: wildride made a great point in the comment section–the west coast is having a great weekend so far with the top three riders being from California.  After a disappointing Rolex, California made a big statement today.
Link: Tiana’s spring season recap
0 0 votes
Article Rating
Subscribe
Login
Please login to comment
0 Comments
Inline Feedbacks
View all comments
More Insanity on Horse Nation >>