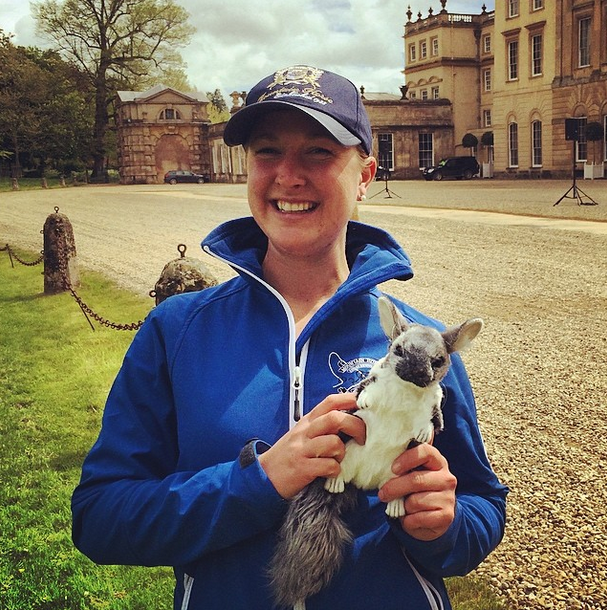 Chinch getting some love from Tiana. Photo via EN's Instagram.

Tiana Coudray and Ringwood Magister arrived on the Badminton grounds this morning, ready for their second crack at the event and hoping to improve on their placing of 17th last year. Finn looks very much up to the challenge, bouncing around in his school this morning; check out my morning update for photos and videos. The grounds here at Badminton are massive, and Tiana said she briefly wondered how long it would take to catch Finn if he bucked her off this morning. He’s currently plotting how to make his grand entrance in the trot up this afternoon, of course, as he loves to put on a show.

“If he wasn’t bouncing around and having a buck and a play at this point, I’d be worried, so this is him; this is how he should be,” Tiana said. She’ll ride him again this afternoon, and the rest of her rides before dressage will depend on whether her time is late Thursday afternoon or early Friday morning. “By about the sixth ride, he’ll be ready to go,” she said. Tiana said she’s very pleased with how Finn has felt in the lead up to Badminton, so much so that she condensed his spring schedule because she felt he didn’t need the runs. “He hasn’t done loads, but I think he’s done enough,” Tiana said. “He’s quite an experienced horse know. I know him quite well and have had him since the very beginning, so we’ll find out this weekend.”

Badminton is a big event in any year, but with Giuseppe Della Chiesa’s new course being every bit a proper four-star and the selectors watching closely with regards to who will ultimately go to Normandy, the pressure is on now more than ever. “It’s hard because you have to be in two states of mind,” Tiana said. “One, you have to go on the assumption that you’re going to have a good spring and going to go to Normandy, and you have to have the long picture in site and look to do your year so that you still have a horse come September. But at the same time, it’s all or nothing. You have to go well this weekend. You have to be ready for this weekend or September doesn’t matter.”

Tiana said she’s heading in to the competition with the same strategy as last year with just a few tweaks for the show jumping. “We’ve learned a few more things about him and how to warm him up a bit better,” Tiana said. “That ring just has a funny feel when you canter in to start jumping. Last year, we had him too quiet, too collected, and he’s a very short-strided horse anyways. I made that mistake last year, and then we corrected it for Aachen, and now we know we need to have his stride opened up and have him ready to jump.” Many thanks to Tiana for chatting, and Go Finn!