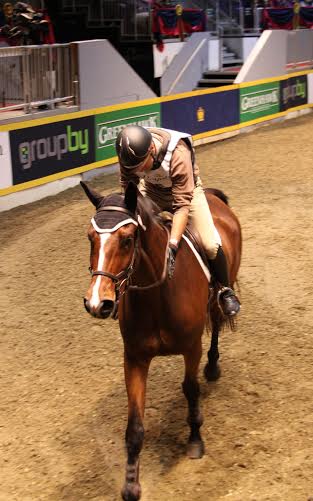 Set in downtown Toronto, this historic 91-year-old horse show is readily accessible to all horse fans and lovers, and last night a sold out house literally screamed their appreciation for every rider at every fence during the very popular Horseware Ireland Indoor Eventing class.

The first night was impressive for the size of audience that stayed to the end, and last night’s enthusiastic audience continued to demonstrate the popularity of a class that illustrates a few of the challenges of eventing in a tightly packaged format.

After a lovely and winning first round, the pressure was really on Tik Maynard riding Dutch Times to produce another bold round to hold off the other competitors, which Tik did with the same long-rein, trusting ride he used so successfully the first night.

He was fast, but not clean – one rail down on the last fence, causing a tense silence while the judges tallied his time tonight, added the time faults for the knockdown, then added it to last evening’s time, and announced 117.81 seconds – the overall winner for the two nights. Tik won this evening’s round as well, just sneaking in front of Holly Jacks-Smither with a .28 margin.

Tik explained the extreme atmosphere saying he “thought it was going to ride a lot smoother than last night, more like a little hunter round. But once you get in there, and the crowd is bigger and the lights are dimmed and they’re playing the music but you can’t even hear the music.” And, he proudly observes, the first and second and placed riders are both British Columbia natives!

Producing another thrilling round on More Inspiration, Holly Jacks-Smither had the only clear round for a total of 122.30 seconds. She was elated, stressing how last year’s competition was his first opportunity to learn about a big, loud, close-up arena full of screaming fans (think boy band audience). This year, he stepped up to deliver two back-to-back clear rounds.

She cheered and celebrated with her good friend and fellow competitor Kendal Lehari, who, on a catch ride, finished the second round in third place, and a very credible sixth place overall. Kendal had ridden Rachel Johnson’s Just By Chance only twice before entering the ring last night, making tonight only their fourth ride together. 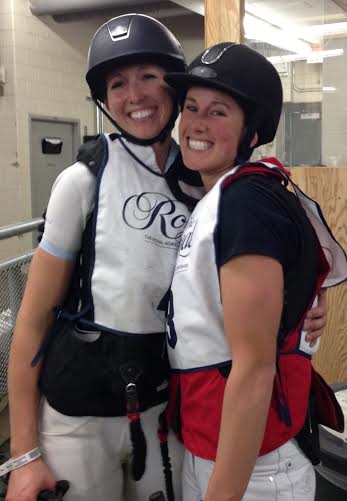 Waylon Roberts, the Royal champion for seven years running should win an award for The Most Determined/Athletic/Gutsy Rider, finishing in fifth place. While Waylon was standing in the chute, on deck, watching his father’s ride, a rough jumping effort by Copper Cove pitched Ian off, landing Ian not 40 feet from Waylon. Watching intently as his father got to his feet and walked out, Waylon then had to go right into the ring to ride his own round.

Despite that, he put in a strong ride, although narrowly – landing after the Pig Fence, fence 12, it appeared the two were going to go in separate directions, but Waylon is one sticky and determined rider, and not only recovered but also went on to finish with at least one blue stirrup still loose, if not two.

Sinead Halpin and Forrest Nymph finished seventh, but Farrah seemed more settled to the intense atmosphere this evening, putting in a great effort but for a couple of show jump fence rails.

It was a tough night for Ian Roberts and for Colleen Loach, who had a really thrilling round going after a second place finish last night on the nifty Free Spirit, bred and owned by Peter Barry. Sadly they bobbled coming up on the bank, but Free Spirit uncorked a heroic effort to get over the back logs, unfortunately unseating Colleen as a result, who got up quickly. 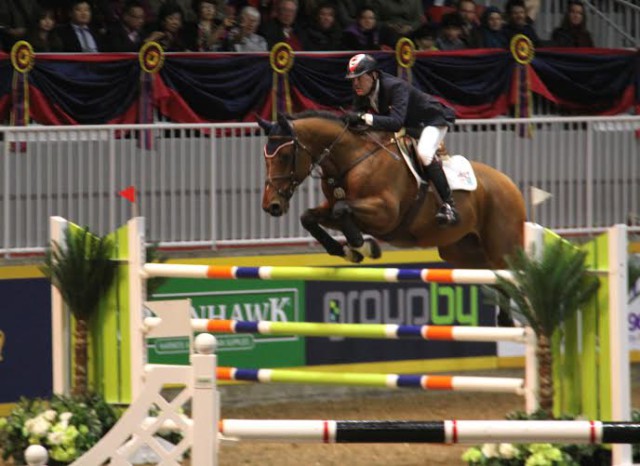 Meanwhile, I can’t help but give a huge shout out for our greatest jump rider ever — “Captain Canada” Ian Millar, who last night won the $100,000 Greenhawk Canadian Cup — at 67 years old, continuing to beat “the kids.” Ian has ridden in 10 Olympics, which would have been 11 but for the boycott of the Moscow Olympics in 1980, and is a strong candidate for the 2016 Rio Games.