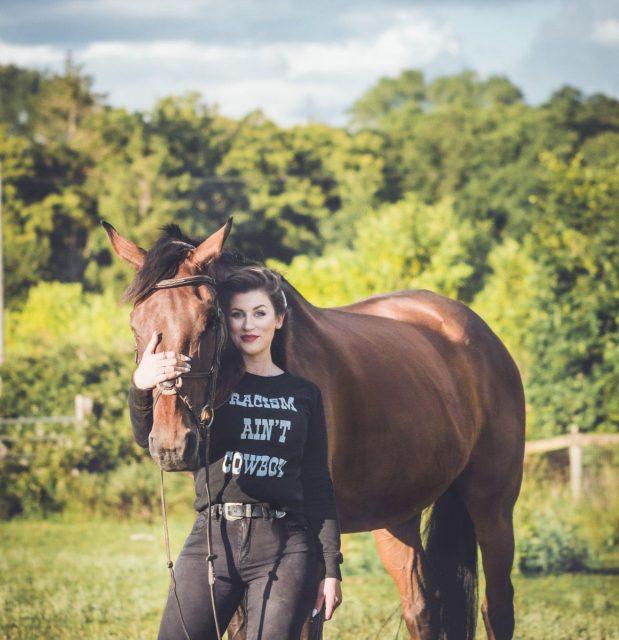 Since protests erupted around the world in the aftermath of the killing of George Floyd, EN’s British correspondent Tilly Berendt has had her foot on the petrol, committed to making a difference both within our sport and beyond. Her activism isn’t limited to the words she writes but is also evident in her actions, the latest of which is her launch of a limited range of t-shirts and sweatshirts. 100% of the profits from their sale goes to equestrian access programs such as Ebony Horse Club (London), The Urban Equestrian Academy (Leicester), Compton Cowboy Jr. Posse (California) and more. Also, each sale buys a book for Saddle Up and Read, a North Carolina-based literacy program that gets kids in the library and in the saddle.

The idea for the shirts has its roots in Tilly’s June 15 edition of Monday News & Notes. The post featured photos from a horseback-led Black Lives Matter demonstration in Compton, California, as published in the New York Times. Hanging from one horse trailer, penned in marker on a piece of cardboard, was the message “Racism Ain’t Cowboy.”

Tapping into a long tradition, black cowboys are taking to the streets. This past Sunday in Compton, Calif., a group of black men and women known as the Compton Cowboys led a peaceful protest through the streets with Mayor Aja Brown. As hundreds of people marched alongside, the cowboys rode with their fists raised in the air, yelling, “No justice, no peace,” as the music of Kendrick Lamar, also from Compton, blared in the background. Around the country, hundreds of other black cowboys and cowgirls have joined in the protests over the death of George Floyd and against police violence and racism. Their presence is a reclaiming of sorts of the traditional role of mounted riders in demonstrations. Historically, horses have been used by military units and law enforcement as a way to show authority — their visibility and height seen as a symbol of power. The @comptoncowboys grew out of a group of 10 friends who came of age in the 1980s and 1990s — one of the city’s most violent and chaotic eras. They learned about horses on Richland Farms, an agricultural community in the heart of Compton. Many of them have talked about what it means to be a black cowboy in one of the world’s most stigmatized communities, and how horses provide salvation from past trauma and safety from police violence. Randy Hook, in the 2nd photo, saddled his horse that day for a larger cause, he said: “I could cry, and I never imagined anything like this. We’re making our family proud, our ‘hood proud, and our city proud.” Keiara Wade, the only woman in the Compton Cowboys, in the 6th photo, expressed similar emotions. “These horses feel whatever we feel, and they are hurting right now because we are hurting right now, too,” Ms. Wade said. “There is so much love and unity within the black cowboy and cowgirl community. We’re just trying to bring that energy to these marches in a peaceful way.” Tap the link in our bio to read more from @mychivas. Photos by @kaylareefer.

Tilly dug into the history of Black cowboys in the American west.

“But here’s the thing: the idea we’ve all got of American cowboy culture is all wrong. In fact, the wild, wild west was pretty damn, well, black.

“Before the abolition of slavery, many slaves in the southern and western states were taught typical ranching skills – they learned to ride, to rope, to patrol fence lines and tend cattle. The only difference between what they did and what their white compatriots did? The white ones got paid. But then the Civil War happened, and white Confederate ranchers were conscripted into the war efforts en masse, heading into battle to fight for their “right” to keep slaves. Spoiler alert: they lost. Even bigger spoiler: while they were away, their cattle – you know, the thing that earned them the big bucks – had sacked them off with much the same enthusiasm as their newly-freed ex-slaves. The ranchers were, in a word, screwed – their staff numbers were way down, their retirement fund was mooing off into the sunset, and the white lads they’d normally hire had all gotten themselves killed in service of the world’s worst cause. There was only one option left.

“So that’s how tending America’s ranches and leaning hard into cowboy life became one of the earliest ways for a free Black man to earn a living after the Civil War – in fact, around 25% of cowboys were Black, though the extraordinary whitewashing that Hollywood gleefully undertook has told you a very different story. As it happens, Django wasn’t quite as much of a fairytale as you might have thought.

“These days, the Black cowboy is one of the most enduring symbols of the ongoing human rights movement, thanks in large part to organisations such as the Compton Cowboys, and individuals such as Brianna Noble, who rode her horse Dapper Dan into urban Oakland to take a peaceful stand against police brutality and systemic racism. All over the country – and beyond! – mounted protesters have raised their fists and demanded better from the world. Once again, the horse has become a conduit for freedom.” Read more here. 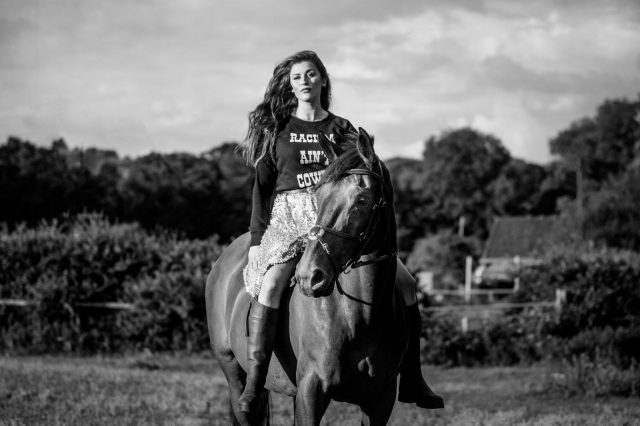 Equestrian sport is one of the final frontiers to tackle in the push for diversity, representation and inclusion, and the onus is on us all to do our part. Your purchase of one of these limited edition slogan tops can help encourage the next generation of BIPOC cowboys and cowgirls — you can do so at the “Racism Ain’t Cowboy” website here. 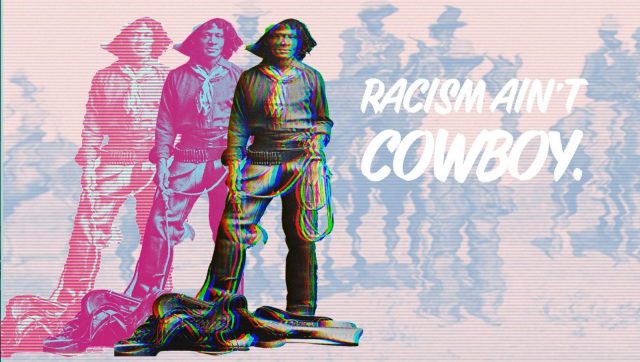