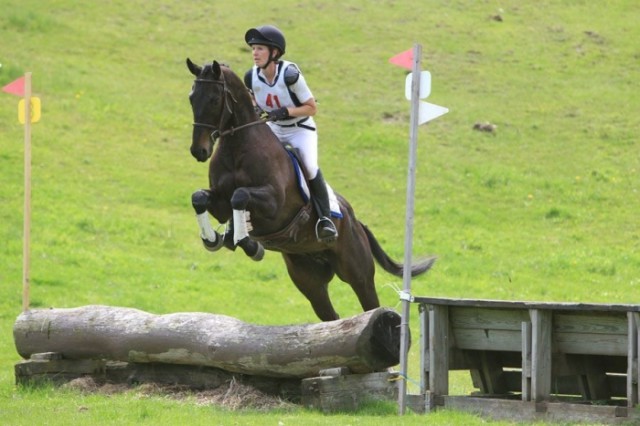 Between my three horses, I’m working opposite ends of the spectrum. Garth and Deszi are prepping to move up to Intermediate soon, and Monty just completed his first beginner novice at GMHA. Given “Big Kid’s” quick progression to Preliminary, it has been easy to forget where they started. And sometimes it’s hard to believe. Fortunately, a young horse in the string is a fabulous way to stay connected to the entire process.

Isn’t it crazy how quickly we forget where we came from? The tiny moments of small steps can quickly become shadowed by the triumphs and excitement of progression. I find that I forget how intimidating the lower levels can be on a green horse.

And I absolutely, 100% sympathize with my students. Monty has not only helped me in my way of working with young horses, but also in working with my students. As Garth and Deszi progress, I am pushing myself to widen the max oxers in order to strike a nervous chord within my riding, and it is easy to forget what many of my ladies feel as they start their course over their “max oxers.” But on Monty, all you have to do is show me a baby fence with a flower box. Beginner novice is freaking terrifying!

The Muffin began his first USEA event at GMHA like a champion. Though his eyes may be been bugging out of his head at times, he marched around the busy warm-up area like a seasoned youngster. While we were performing our test, the next rider was sent in to begin circling the ring. However, I still had not cantered. She continued to circle the ring. I continued my test. And cantered in both directions. Meanwhile, she is still circling. Monty could have cared less about the distraction, and did his best to understand the questions within the sand box. Clearly, I was more irritated by the rude rider then he was.

Stadium was a lovely forward ride with soft turns and nicely planned approaches. And, it started with a flower box. A really dense flower box that filled all the space to the front rail of the oxer. What would he do? Will he back off? He just turned 4, and though we play over fillers at home this was very busy for The Muffin. I offered a supportive, clear ride to the base and The Muffin didn’t care. This set the tone for the entire course, and he continued in a lovely rhythm without batting an eye. I just love this horse. 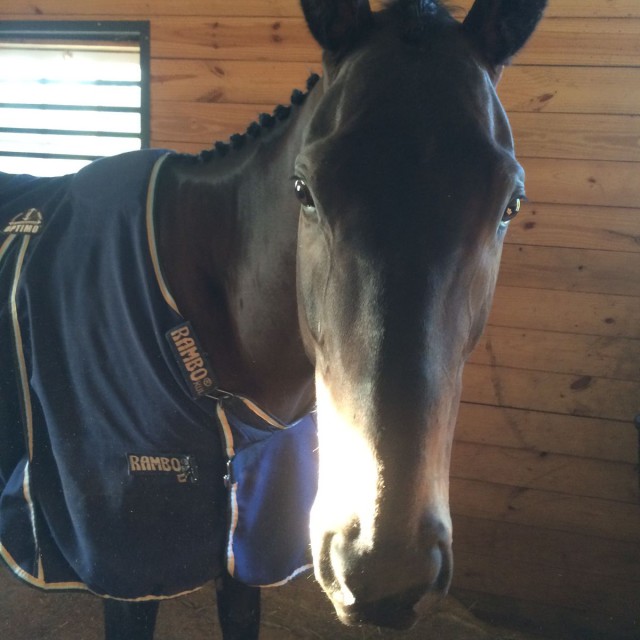 Sunday brought heavy rain, and a breeze that chilled you to the bones. Monty was unsure of the back-to-back trailer rides but figured he would entertain us in hopes of an adventure.

Cross country was darling: fences of every shape and size, nicely incorporating terrain and fillers to encourage a bascule. Monty set off cantering, not sure where he was going but he was going to have fun. Happily flowing to the first fence, he noticed the baseball bats, hats and paraphernalia. What was he going to do? This fence was at the end of the line with a nice option to run out. He’s never jumped flags before. Leg on, and he softly carried us over the fence. The rolltop was off  a slight turn with a thick base of hay. He paused for a split second, and then cantered off the leg to the base without hesitation.

At this point, I think “We are having fun. This is much easier then I thought it would be!” And up the hill through a gallop path we went. Like a true gentleman, he calmly covered the terrain, never trying to take over, but preferred the less-traveled strip of dirt footing. As the course continued, we worked as a team and every fence became more natural. As we softly sailed over the brush, barn, ditch flower bench, water and bank, Monty casually covered ground without any worries of his surroundings. He was focused and waiting — waiting for me to build his confidence and tell him he could jump whatever was next.

We ended our course with time faults. I chose to walk down two significant hills as Monty was slipping and sliding through mud. I didn’t see the sense in compromising his confidence over a ribbon. His attitude and willing nature had already earned more pride then any rosette could offer.

Like many of us, I had the initial concern before entering the start box. Once we were on course and rode that first fence, I felt much better about the ride my baby horse and I would have. It is tricky, because as we are developing a horse, we are also developing as riders. And within that dynamic, there are unknowns between us and our partner. But as trust envelopes the partnership through practice, schooling, and with the guidance of our instructors, we build a foundation. Soon, those max oxers are quickly within reach.

A HUGE congratulations to my ladies Jackie and Missy, who both moved their young mares up to Training level and Novice level with great success!