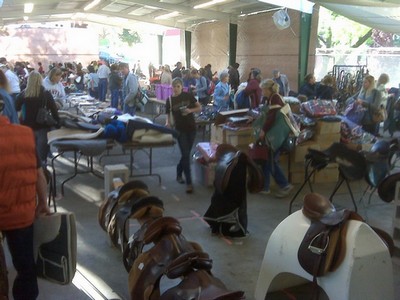 I'm not ashamed to admit that I'm addicted to tack-swaps.

With Halloween fast approaching, that can mean only one thing–time for fall tack-swaps! Fall is the perfect time to clean out your tack room to make room for all of that new stuff you’ll pick up at the holidays (and at the tack-swap).

In all reality, tack-swaps are a loosely coordinated effort by horse-people to move items between tack-rooms. There is no significant “downsizing.” Even if you take things to a tack-swap as a seller, odds are you’ll come home with something new-to-you. Tack is like Energy. The law of conservation of tack states that the total amount of tack you have in your life can not change. It simply changes form, sometimes becoming “potential tack,” in the form of money or room for more tack. I love tack-swaps. I’ve been known to drive two hours for a tack-swap.

Two years ago, Kalli brought me in to the Tack-Swap Collaborative. Believe it or not, I wasn’t big on tack-swaps prior to my indoctrination. My first tack-swap experience was an eye opener and an addictive rush. One early spring afternoon, Kalli mentioned off-handedly that one of our area’s local tack-swaps was coming up and that a few folks from the barn were planning on going. I said I’d tag-along because I was in need of something (I think I may have been saddle shopping at the time?) and was completely caught off guard when she said that we’d be meeting at the tack-swap at horse-show o’clock. I gave her a skeptical look and said I’d be there by horse-show-thirty. She smiled a knowing smile and said that she’d save a spot in line for me.

The day of the tack-swap, I showed up at the site just before horse-show-thirty and was boggled by the sheer number of cars in the parking lot as well as the MASSIVE LINE forming outside the small red clubhouse. True to her word, Kalli had saved a spot for me and was going over the battle-plan.  I took in the scene, overwhelmed by the number of people in line, while assignments were doled out. Rachel would go thru the breeches, Candice would check out hunt-coats and tall-boots, Kalli would hit up bits and I would simply try not to get overwhelmed or crushed by the growing mob. We all collectively agreed to keep an eye out for things like Tipperary vests, big yellow watches and other Very-Nice-Things. We would collect anything we found and meet in a corner of the clubhouse to see if anyone in our group wanted them.

I peered in the window at the riches that awaited. This was going to be intense. When the doors opened we were propelled in to the clubhouse by the wave of tack-swappers behind us.I was swept away from my friends rather quickly and into the whirling chaos of the tack-swap. Somehow we managed to meet-up and share what we’d found from our assigned “stations.” It was like Black-Friday inside of a tack room. At the end of the day, I emerged from the clubhouse with a Hawaiian-print stretchy hood, a pair of rust breeches and a new found addiction.

Fortunately, in the Sacramento area this addiction is easy to feed. We have a few significant tack-swaps a year–one of which is coming up very soon. The Collaborative is already in deep discussion to determine our numbers, strategy as well as preparing a master list of sizes and wants of Collaborative-members who aren’t able to attend.

Here’s to hoping that I’ll find that elusive trunk-of-rust-breeches.