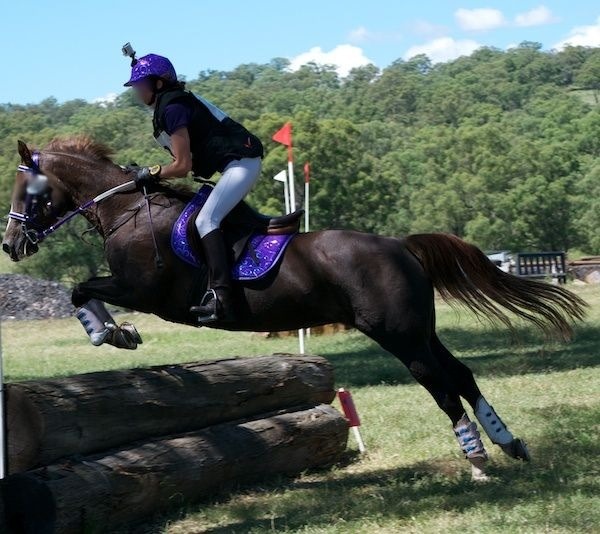 
By now you will have heard about the great Helmet Cam Kerfuffle. Thanks to Visionaire for stealing my thunder. Anyhow let me go back a week.

Last weekend I was Technical Delegate (TD) at a local Aussie event in Scone and I was asked if I knew about the new helmet cam ban. To be honest I didn’t but I had seen one young lady out on XC earlier in the day wearing one, so I went looking for the rule.
I searched in the Aussie & FEI Eventing rules as well as searching the emails I get from the FEI and couldn’t find anything. It was decided by the Organising Committee at Scone that they wouldn’t allow the use of helmet cams on the grounds.
After returning home and getting sent the link to Peter Atkins & Henny’s run at Red Hills I thought I should do some more digging. I found a reference on Horsetalk to a press release made by Horse Sport Ireland welcoming the new rule. It even made reference to the fact that it was in the General Regulations of the FEI. So I went to the current version of the FEI Gen Regs for clarification.
This is a screen shot of the rule as it stands (at time of writing this). 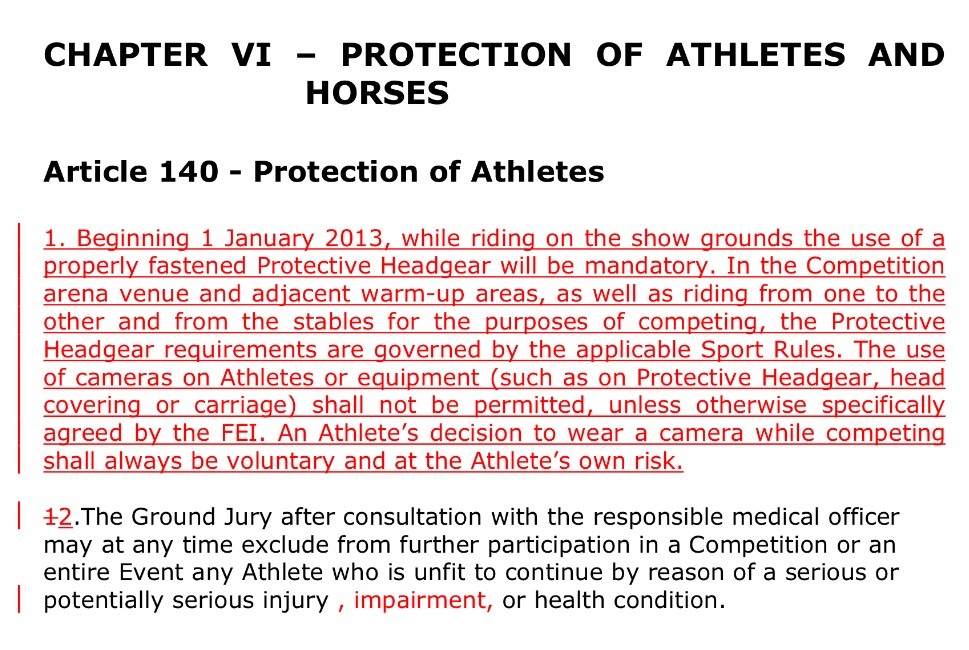 So, here I was thinking, OK the FEI have introduced this new rule, to come into effect next year, that’s why I haven’t heard anything. Plenty of time to get it sorted because to be honest this rule gives me more questions than answers. So lets break it down, there are two parts to the rule, firstly wearing “properly fastened Protective Headgear will be mandatory” to be honest as a bit of a safety nut I am happy with this, this has been standard in Australia for years now.

The second part is where it gets interesting. “The use of cameras on Athletes or equipment (such as on Protective Headgear, head covering or carriage) shall not be permitted, unless otherwise specifically agreed by the FEI. An Athlete’s decision to wear a camera while competing shall always be voluntary and at the Athlete’s own risk.”
I have/had a number of questions, many remain unanswered by the FEI, although they have promised a clarification to the relevant people soon.

My Questions and answers where I have received them. My questions to the FEI whilst directed at the sports and press teams were answered by the FEI legal team which speaks volumes to start with.

ESJ: – Is the ban on helmet cams in place now or does it come into effect in 2013?
FEI: – The FEI General Assembly approved last November the new wording of article 140 of the FEI General Regulations. Please note that the provision pertaining to the use of camera on athletes or equipment is applicable as of 1 January 2012 (your reference to 2013 only applies to the use of properly fastened protective headgear).
Note (ESJ), as a side point, this is as clear as mud in the rules as they stand at the moment, there is no differentiation of timelines in the written rule.
FEI: – Please note also that there is no ban on camera on athletes or equipment, but such use shall only be permitted if agreed by the FEI. Any use of camera shall not present any safety concerns or risks and/or shall not place the FEI or any other party in jeopardy of breaching any of its contractual obligations or responsibilities.

ESJ: – If riders are able to obtain a exemption from the FEI to wear one, what is the process and to whom specifically do they apply?
FEI: – Finally, please note that we will revert back to you regarding the practicalities of the implementation of such new provision as this is currently being finalized and should be available shortly.
Note (ESJ), So as it stands, cameras are not banned but they must be approved by the FEI. There is currently no process for obtaining approval from the FEI. A rider must apply to someone? FEI Legal, FEI Sport Division or the Ground Jury at an Event? Nobody knows. To be clear, this rule has been in place for 2 1/2 months now and was voted on in November. You would have thought these questions have come up by now…….

ESJ: – For those riders who obtain permission to use the cameras, how do I as an official or in fact any official particularly the XC warm up Marshall’s know they have permission?
FEI: – Refer above, there is no answer to that question at the moment.

ESJ: – Is there a list? It is public? If so where can it be obtained from?
FEI: – Refer above, there is no answer to that question at the moment.

ESJ: – Is the ban in relation to safety or is it question of Sponsors rights or is it a deeper question of damage control?
FEI: – Refer above, there is no answer to that question at the moment.
Note (ESJ), Interestingly this lies in the part of the rules regarding protecting the Athlete. There have been many comments about sponsorship rights, and I am sure this has something to do with the rule, especially with the Games this year. The IOC is notoriously protective of its sponsors rights. They have special teams searching venues for brand names of non-sponsors and have them removed.
I have also heard this may be about safety, i.e. having a hard object strapped to the outside of your helmet when you hit the deck could be nasty. I can imagine that most helmet manufacturers wouldn’t be too keen to wear a liability claim in such circumstances.
Finally there are those that believe this is about controlling bad pictures about the sport, imagine a graphic video of a rider hitting the dirt and being seriously injured or worse and this ending up on youtube. I might buy this explanation if every second person at an event wasn’t videoing or photographing every move on their camera or cell phone. Bad pictures will happen.
As a TD a helmet cam may help prove or disprove a case of error of course or otherwise. In fact in one of Peter and Henny’s earliest videos that did happen and the rather graphic conversation between Peter and myself was edited from the public video.
So there you have it, the story so far, the FEI have promised to further clarify some of my questions and the more I read the more questions I have, for instance, the rule makes no mention of attaching the camera directly to the horse, is this allowed.
This is another case of creating a rule without a clear plan or a communication strategy. Personally I am frustrated because I as a TD will end up on the wrong end of a frustrated rider with an unclear rule, that is pretty ordinary.

Finally I leave you with a comment from the FEI Legal team on consequences:
FEI: – As to the consequences for wearing a camera without permission, this should be decided on site by the FEI Officials in accordance with the FEI General Regulations. The sanctions would depend on the exact circumstances and could consist of a warning, an official yellow warning card, or a fine for example.
Note (ESJ) Serio
usly, a yellow card or a fin
e. Wow, I can’t even work out what we are banning the use of cameras for, let alone how one obtains an exemption, I sure as hell don’t want to be the one handing out a penalty on those grounds.

Hopefully in the coming days or weeks the FEI will further clarify their position, explain the rule, processes and penalties in more detail. In the meantime boys and girls, please be aware that wearing a Camera on yourself or your gear whilst competing at an event both FEI and National levels (don’t even get me started on how to apply FEI Gen Regs at Nat events but let me tell you they do apply) you may be penalised.

Hopefully we haven’t seen the last Henny cam, only time will tell, in the meantime I leave you with Peter and Henny at Red Hills last weekend. Run Henny Run.