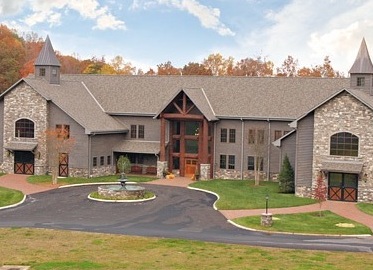 Have you ever wondered what a $5.1 million barn looks like? Horse Nation is here to give you the grand tour of Sequoyah Farms.

At first glance, Sequoyah Farms seems incredibly glamorous: horses that cost more than sportscars, wreaths of blue satin ribbons, a stable more luxurious than most people’s homes. But the Watkins family seems to understand that at the end of the day, it’s still just a barn.

For being such well-heeled horsepeople, Greg and Kim Watkins are refreshingly down-to-earth and hard-working. Even though the day is just beginning, Greg Watkins’ face is already glistening with sweat. There are horses to be groomed and exercised, stalls to be cleaned, and plans to be made. It’s a big job, even for the staff of seven that assist Greg and his wife Kim in keeping the Andersonville, Tenn., farm and its enterprise, GK Performance Horses, up and running.

The days are long and the mornings come early thanks to the home’s built-in alarm clock system–a stable full of horses clamoring for their breakfast at 8 a.m. sharp.

Greg, Kim and their five children never intended to live in a barn. The upstairs apartment they now call home was originally designated for the barn manager, with a main house to be built elsewhere on the property. But things began to take on a life of their own during construction, which began in 2006. 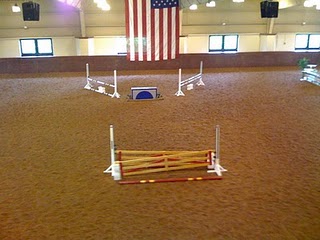 The indoor is pretty nice.

Piece by piece, the “groom’s quarters” evolved into a stately living space illuminated by oversize windows and punctuated by rustic yet elegant furnishings. Chocolate browns mingle with minty blues and golden accents that lend the home a warm, comfortable glow.

The dÃ©cor, masculine leather furniture with charming Appalachian accent pieces, makes it the perfect place for the Watkins to kick off their boots and relax after a long day in the barn below.

“When Greg does something,” wife Kim explains, “it tends to mushroom a bit. We wanted to build the barn first, and the next thing you know, we’re living in it.”

“It just kept getting bigger and more involved,” Greg recalls. “At some point, it was like, forget it, we’re going to live in the barn.”

Incidentally, the couple seem perfectly at home, both literally and figuratively, in their stables. They walk from stall to stall, occasionally ducking inside to rub a horse’s velvety nose.

Every four-legged inhabitant of Sequoyah Farms has a story to tell. There’s Ado Annie, a Grand Prix showjumper and World Cup qualifier that Kim describes as the “star of the barn.” There’s Utopia, a top Grand Prix horse that has ribboned in Nations Cup competitions around the world. In the stallion wing, there’s Cubito, a Holsteiner Verband champion the Watkins imported to become the cornerstone of their breeding program. 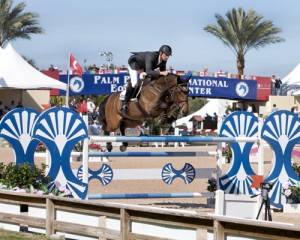 The horses are alright.

From competition horses to mares in foal, pint-sized ponies to statuesque steeds, the Watkins seem intimately familiar with each four-legged member of their family–their likes, dislikes, passions and quirks.

Outside the facility, an imposing structure constructed of stone and massive wooden beams, moss-green hills ripple out into the distance. Nestled into the mountains of East Tennessee, Sequoyah Farms feels like a tranquil retreat from the world.

The farm’s 130 acres are crisscrossed with black four-board fencing; in the springtime, they’re dotted with new mothers and their spindly-legged foals. “We love all of it but have really gotten into the breeding side of things,” says Kim.

The stable’s foaling wing is equipped with live video monitors linked to their apartment upstairs so they can sneak downstairs and watch the birth. Additionally, the barn includes a collections room and lab. The ultimate goal, Kim says, is to produce sporthorses capable of holding their own in national and international competition. 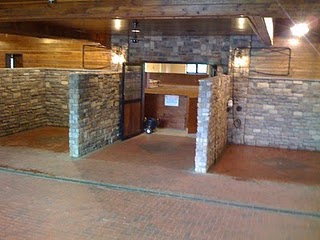 The Watkins watch a young rider canter Connery, a big gray show-jumper, over a course of brightly-painted fences in their indoor ring. It’s clear that these horses are athletes, specially bred and painstakingly trained to make such great physical feats appear effortless.

Not unlike the horses, Sequoyah Farms’ accomplishments are the result of a carefully balanced combination of planning and passion.

“It’s been a real learning curve,” says Greg, and he seems to understand that their trial-by-fire is far from over. Building a world-class equestrian facility is an endeavor that takes years to complete, and the physical construction is only a part of it.

Success in the horse-show business is a team effort, a collaboration between the many players–owners, riders, grooms, vets, and blacksmiths, to name a few–that help bring a horse’s talents to fruition. Luckily, the Watkins aren’t afraid of a little hard work.

Their barn in Wellington is decent, too.