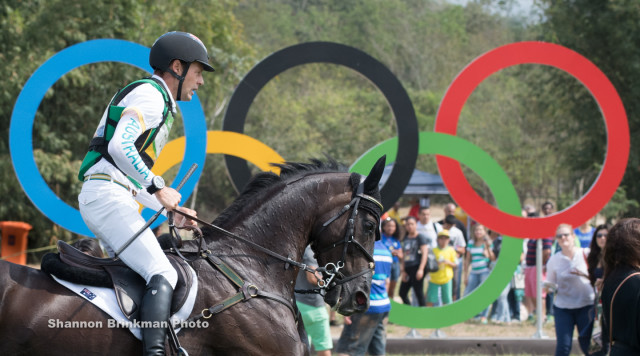 Chris Burton and Santano II representing Australia at the 2016 Rio Olympic Games. Canada and Australia have said they will not send athletes to the 2020 Tokyo Olympic Games unless it is postponed until 2021. Photo by Shannon Brinkman Photography.

The past 24 hours have seen mounting impatience within the Olympic community following the IOC’s announcement of a four-week deadline to make a decision about the fate of the 2020 Tokyo Olympic Games. Cancellation, the IOC has staunchly maintained, is not an option, but postponement or a scaled-down Games are possible alternatives.

An interview with veteran IOC member Dick Pound with USA Today today further muddled the issue, as he stated that the Games are going to be postponed, likely to 2021, with the details to be worked out in the next four weeks.

“On the basis of the information the IOC has, postponement has been decided,” Pound said. “The parameters going forward have not been determined, but the Games are not going to start on July 24, that much I know.”

In late February, Pound dismissed the idea of delaying the Games until 2021, saying they were more likely to be canceled than postponed. Tokyo Organizing Committee officials subsequently described his comments as “speculation.”

No official comment from the IOC has been released.

In the eyes of a growing number of national federations, four weeks is too long to leave athletes in the lurch, potentially endangering their own health by continued training. This is coupled with broader concerns that the Games themselves would be a petri dish for global spread of COVID-19. Canada and Australia have said they will not send athletes to the 2020 Tokyo Olympic Games unless it is postponed until 2021.

The IOC has requested feedback from national federations on the impact COVID-19 has had on sport and athletes.

The Olympic Federation of Ireland has said it will begin collecting input for the IOC, but that its decision about whether to participate in the Games may be independent of the IOC’s decision about the Games.

“We have heard the latest update from the IOC regarding the Games, and we await in due course further information from them,” OFI President Sarah Keane said. “However, we need to consider what’s right for our athletes, coaches, federations and all involved in supporting the system in Ireland at this time. This does include considering if our potential Olympians can and/or should continue to engage in organised training for the foreseeable future.

“This may go against the grain of what they are used to doing day in day out, however at this time all options must be considered which we will do in conjunction with our Member Federations, athletes, Sport Ireland and other stakeholders. We can and are providing input into the IOC as the ultimate decision making body for the 2020 Olympic Games. However, we can make decisions in Ireland for the best of Team Ireland and all involved.”

You can read the full statement here.

The British Olympic Committee will host a conference call with the Olympic officials tomorrow, Tuesday March 23. “The call will primarily be used to discuss the impact COVID-19 has had on domestic sport and athletes, specifically in light of updated Government advice and the closure of elite training facilities across the UK,” a statement released by Team GB today reads.

In an interview with Sky Sports News, Hugh Robertson, chair of the British Olympic Committee, expressed concern that if the virus continues the way the government has predicted there is no way the nation will be able to send a team.

“And I base that on two things. Firstly, I don’t see any way that the athletes and Team GB could be ready by then,” he said. “Elite training facilities are perfectly understandably and quite correctly closed around the country, so there is no way they could undertake the preparation they need to get ready for a Games.”

“Second, there is the appropriateness of holding an Olympic Games at a time like this,” he said.

“We can’t see any way that this can go ahead as things are constituted at the moment and I expect we will be joining Canada and Australia shortly,” Robertson said.

The U.S. Olympic Committee responded to yesterday’s IOC statement with a lighter hand than Ireland or Great Britain, but is firm in its commitment to doing right by Team USA athletes.

“The progress reflected in today’s IOC update to the global athlete community is an important step in providing clarity, but our athlete community continues to face enormous ambiguity surrounding the 2020 Games in Tokyo. Having spent countless hours communicating with IOC leadership, our peers around the world, our NGBs and the athletes we serve, we know the difficult obstacles ahead and we are all appreciative that the IOC has heard our concerns and needs, and is working to address them as quickly as possible.

“Every day counts. We remain steadfast in our recommendation that Team USA athletes continue to heed the advice of public health officials and prioritize their health and wellness over all else. At the same time we are eager to continue to explore alternatives to ensure all athletes have a robust and fulfilling Olympic and Paralympic experience, regardless of when that can safely occur. Together we will find solutions that keep the spirit of the Games alive.”

The 2020 Tokyo Olympic Games are scheduled to begin on July 24.