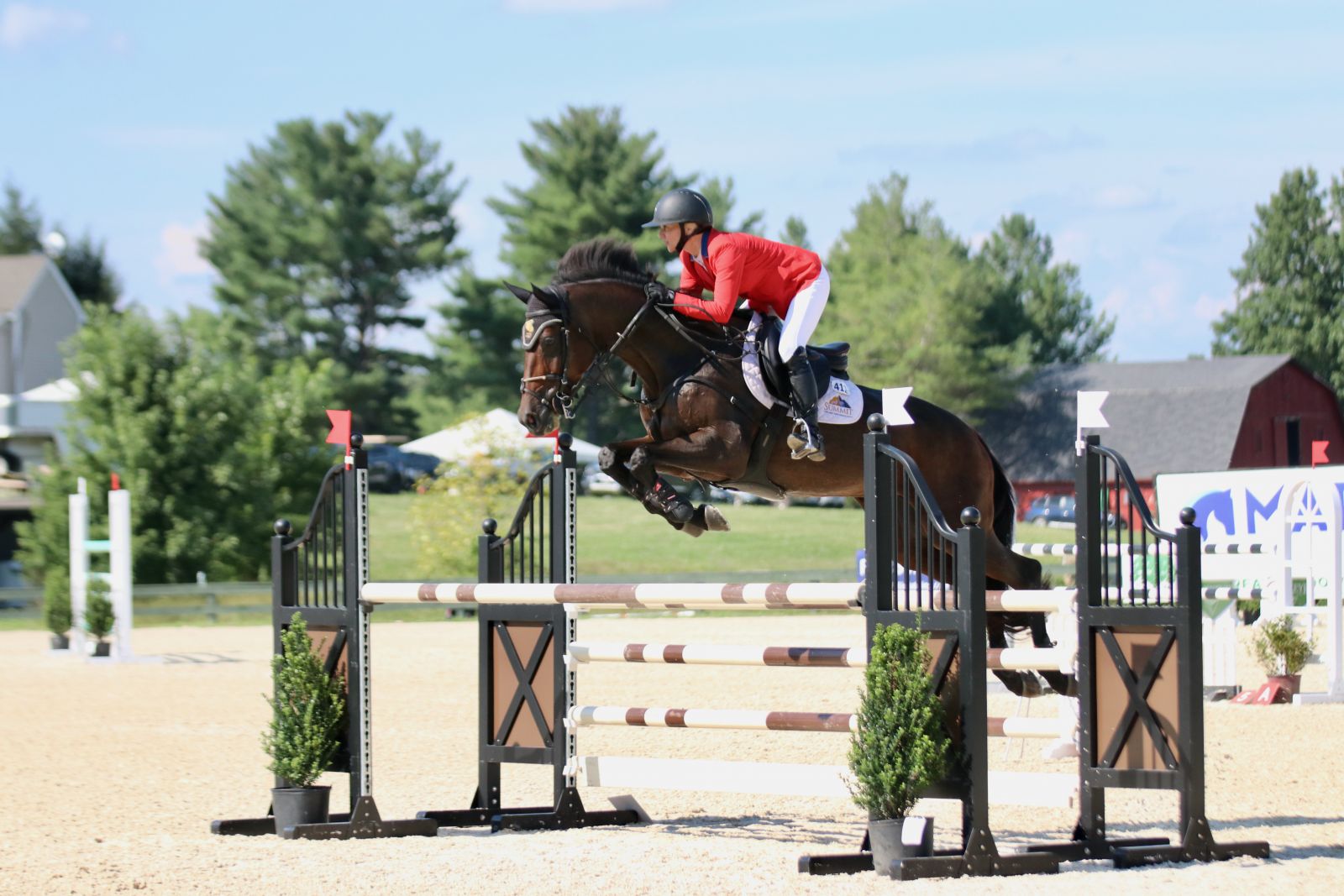 This week’s coverage of MARS Great Meadow International is brought to you by Kentucky Performance Products.

Chris Barnard’s show jumping tracks, which tested all levels here at MARS Equestrian Great Meadow International, caused their fair share of issues throughout the day, but the marquee CCI4*-S saw its top five relatively unchanged after wrapping up the day here in Virginia. Marilyn Little will hold onto her lead aboard Phoebe and Michael Manders and Ms. Jacqueline Mars’ RF Scandalous, notching a double clear effort that added nothing to their dressage mark of 23.4.

Marilyn stated yesterday that tomorrow’s cross country goal is fitness, so while she’s got a few seconds in hand over Phillip Dutton and David Vos, Ann Jones and Tom Tierney’s Fernhill Singapore (2nd – 27.6) she may well put them to good use over David O’Connor’s cross country course. Indeed, this event is full of competitive riders, but many of them are using this as a pipe opener after the spring season or as a set-up for bigger fall plans. That being said, the time here — 6 minutes, 47 seconds this weekend — is notoriously difficult to get, so between that and a bigger picture in mind tomorrow you might expect to see the final standings shuffle just a bit. 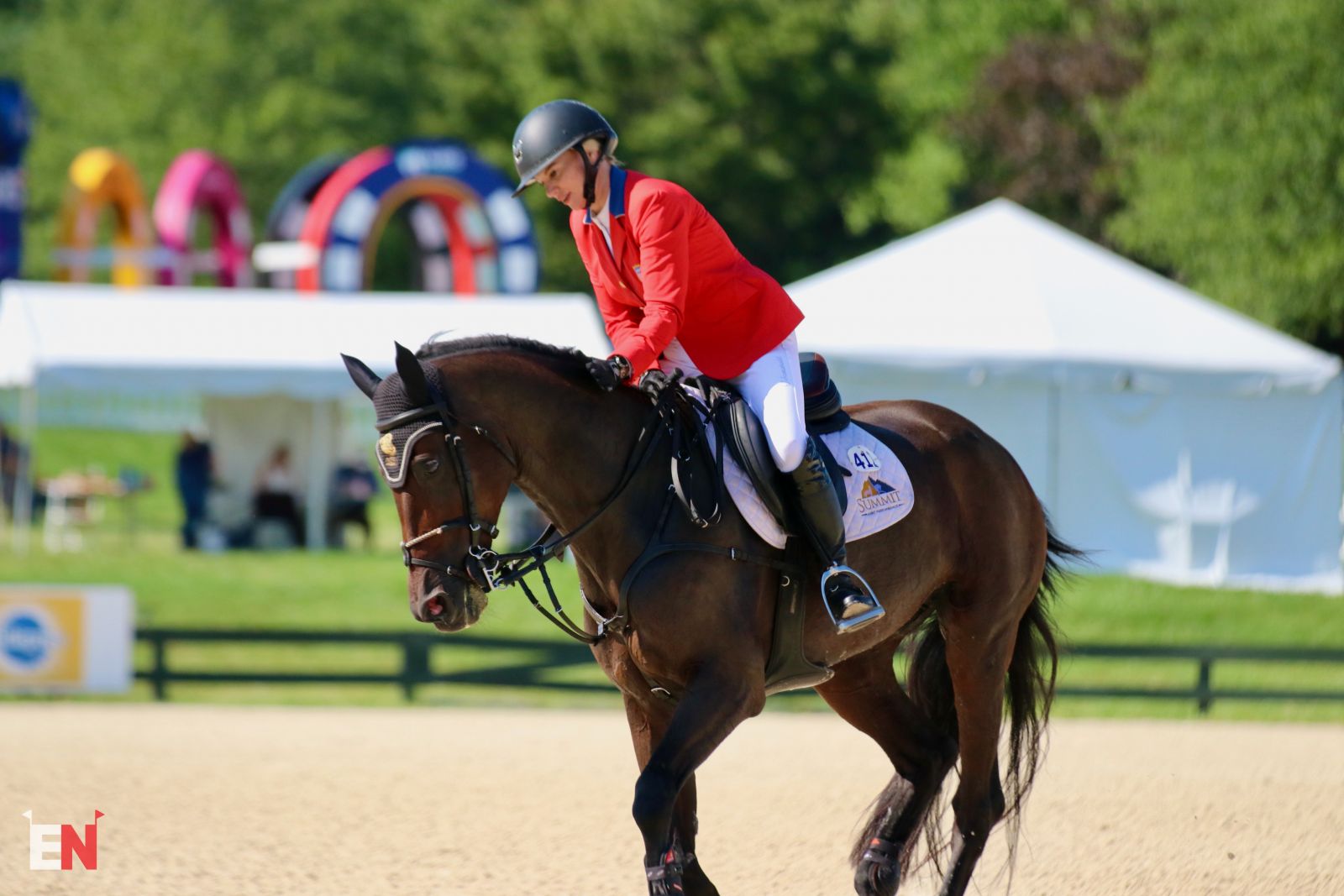 “Kitty felt like she jumped a lovely round,” Marilyn said. “She was confident and rideable. She always tries so hard and just seems to get better with age, but she absolutely jumps better when she’s in front of a crowd. She loves an audience. It’s fun to see her celebrate her clear rounds when she goes through the timers. She’s a very proud horse, and totally deserves those moments.”

Marilyn Little and RF Scandalous produced a foot perfect clear round to maintain their lead in the 4* heading into tomorrow's cross country at the Great Meadow International. Coverage begins tomorrow at 9am ET with the 3* on HorseandCountry.TV

Will Coleman saw his two rides swap places and move up after picking up one second of time with Off the Record. Chin Tonic HS jumped an absolutely gorgeous double clear as the final horse of the day and will remain on a 28.2 in third place overnight. This is the first CCI4*-S for Chin Tonis HS, who we told you yesterday has been one that Will and the horse’s owners at Hyperion Stud have chosen to produce carefully as he grew into himself. Expect to see Will take this one out for an educational go-round tomorrow to up his confidence ahead of his fall season. Off the Record is bound for Aachen in a few weeks, so tomorrow will also be used as a set-up to ensure the 12-year-old Irish Sport Horse gelding is feeling prime and ready for his big trip to Germany. 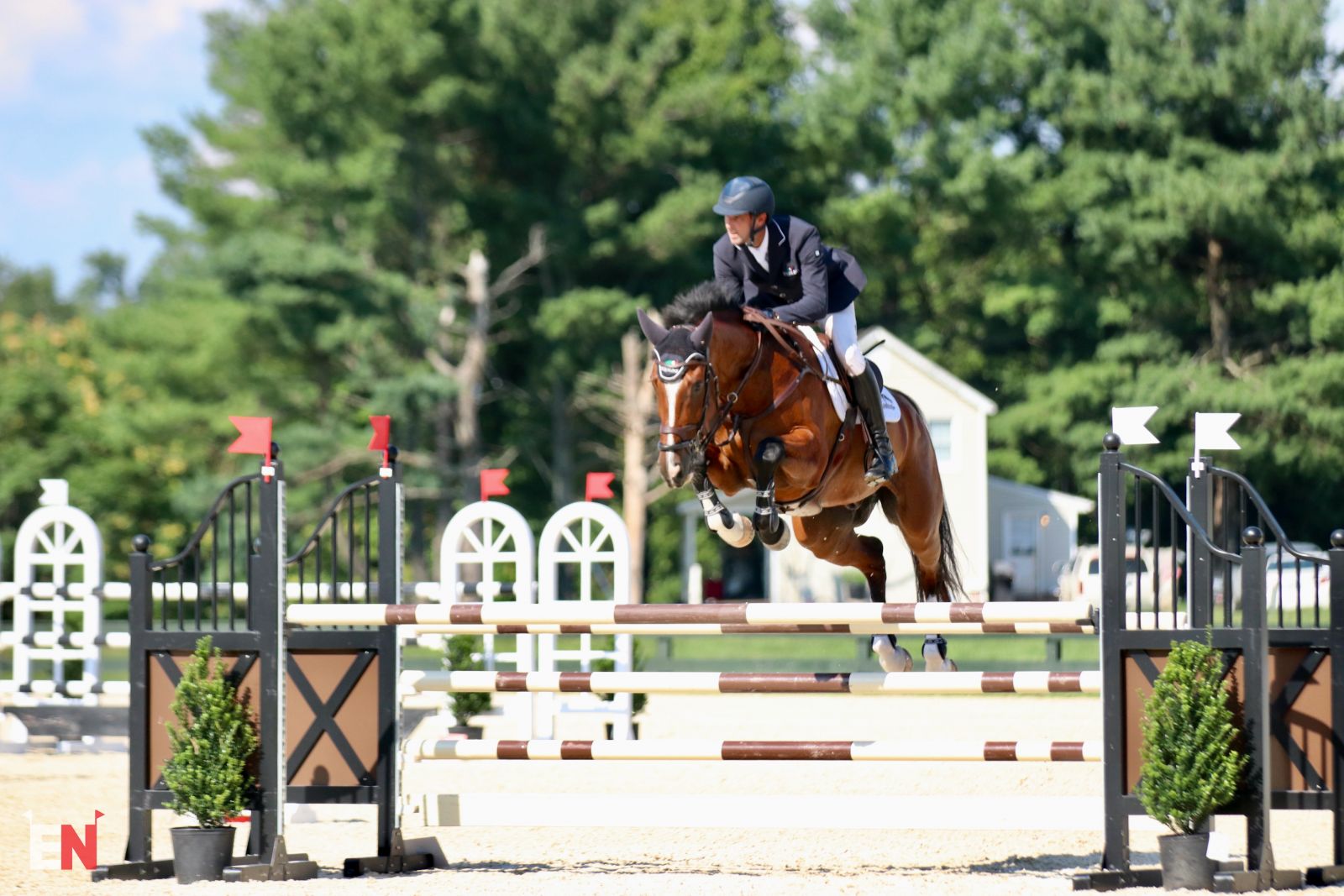 Will Coleman and Off the Record. Photo by Sally Spickard.

Lauren Nicholson would be the only rider in the original top five to lower a pole, just having one unlucky rail with Ms. Jacqueline Mars’ Vermiculus, but she’ll still retain a top-five position on a two-phase score of 31.7. 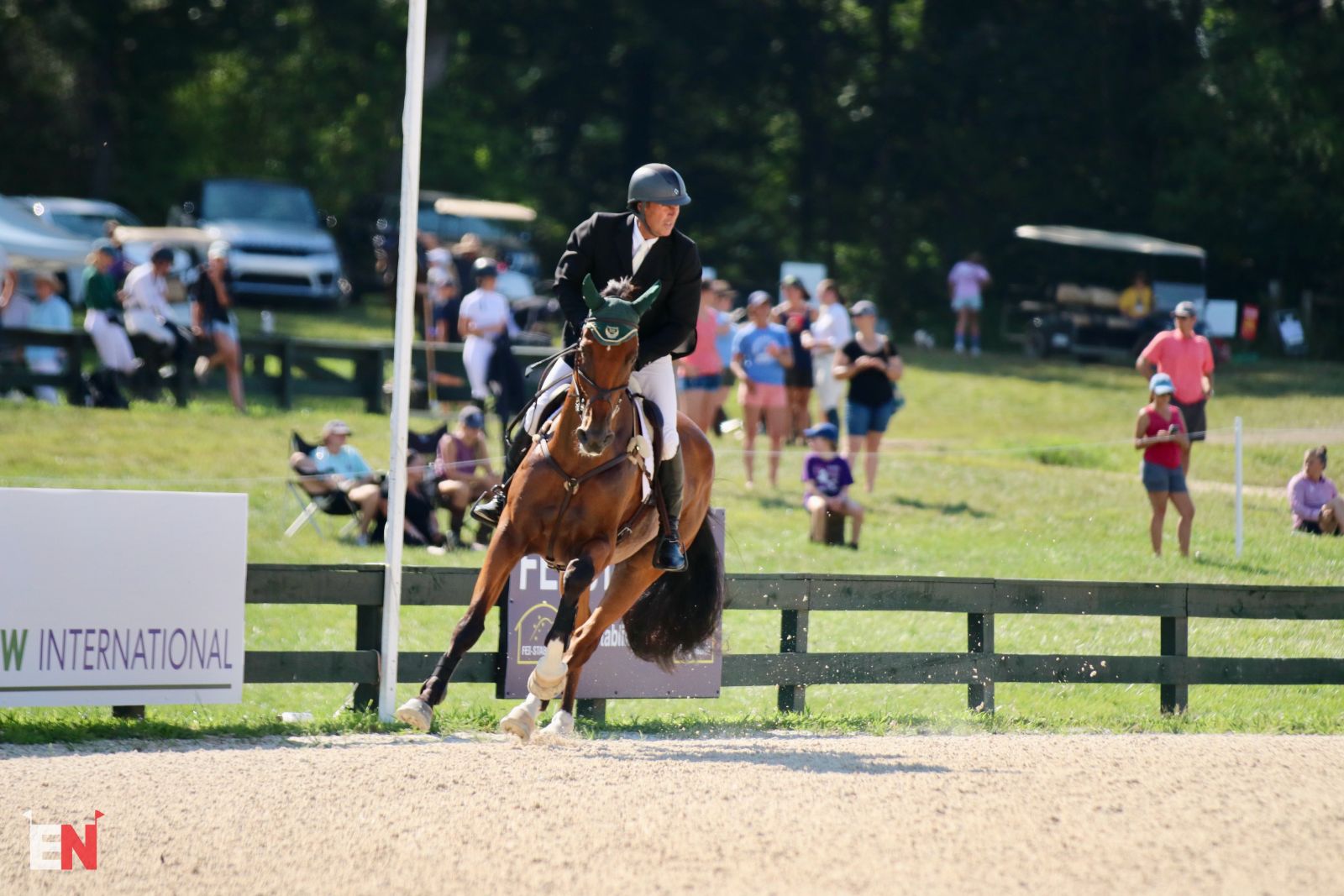 The remainder of the top 10 in the CCI4*-S is full of movers and shakers, as rails rattled and fell throughout the division and opened the door for a clear round to make leaps and bounds up the board. Kevin Keane and Sportsfield Candy rocketed up from 16th into sixth place, adding no penalties to their dressage mark 31.8. 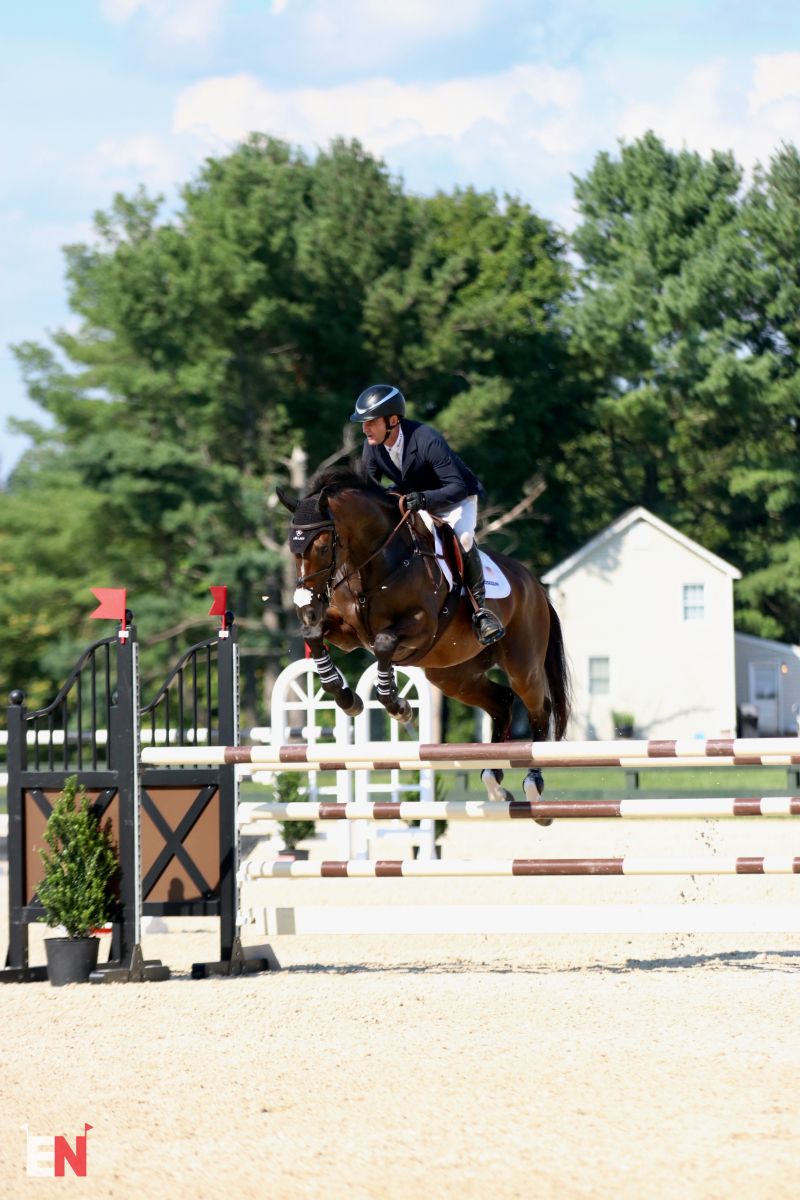 Phillip Dutton and Sea of Clouds. Photo by Sally Spickard.

Phillip Dutton and Sea Of Clouds, who is also aiming for Maryland this fall along with stablemate Fernhill Singapore, moved from 17th after dressage into 7th after show jumping. Kimmy Cecere and Landmark’s Monaco (8th – 32.6), Lillian Heard and LCC Barnaby (9th – 33.2) and Will Coleman and Tight Lines (10th – 33.4) complete the top 10, each moving up from outside of the top 20 on the wings of clear show jumping rounds. Ariel Grand and Leamore Master Plan (10th – 33.4) will tie with Will and Tight Lines to remain in the top 10 despite lowering one pole. 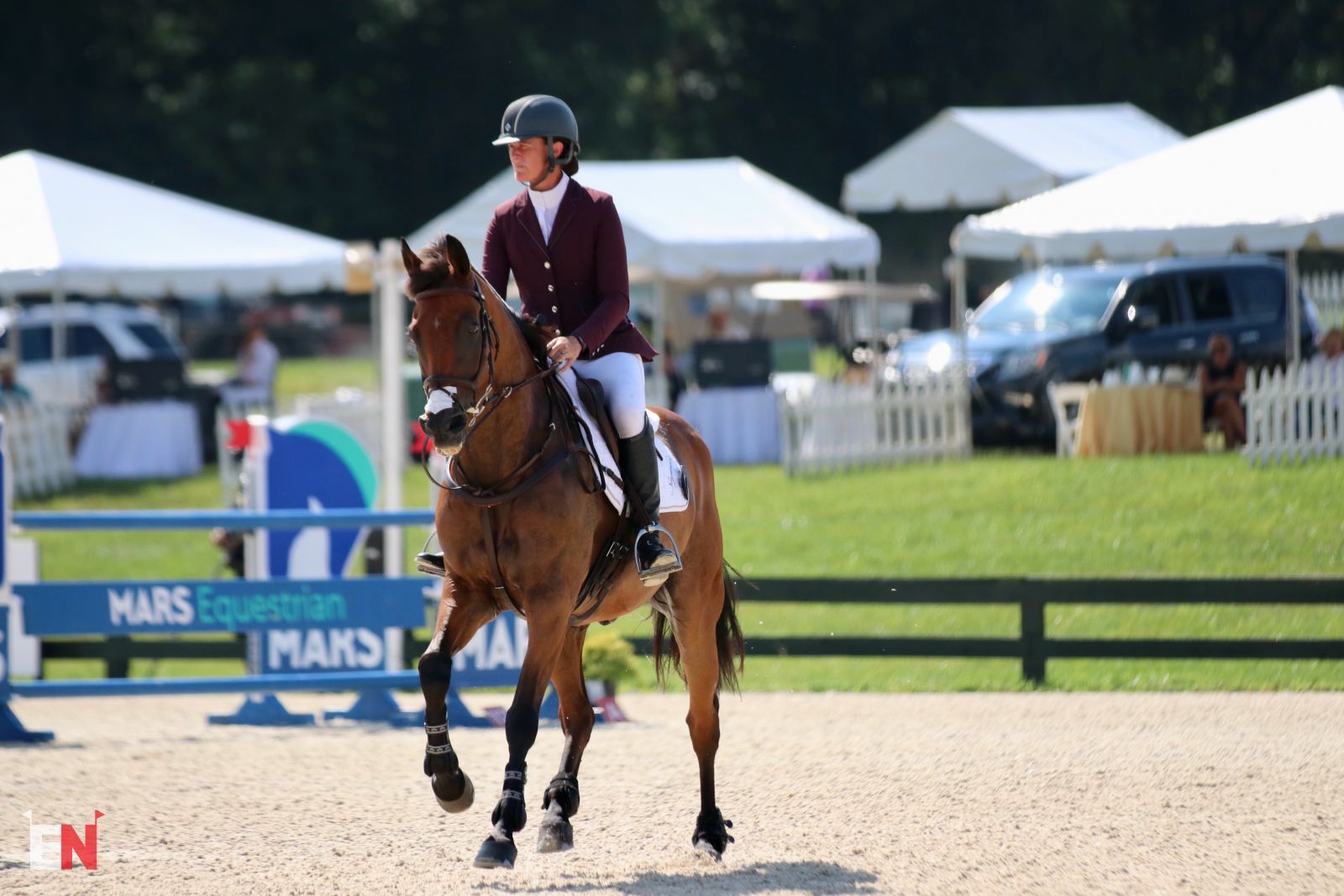 You can check out a preview of the cross country track the CCI4*-S riders will be tackling tomorrow on our Instagram page (look for the story highlight titled “GMI XC Walk” and also here on Course Walk App. I had the opportunity to walk with Sharon White, who’s currently in 13th with Cooley On Show, yesterday, and her general assessment of David O’Connor’s track is that it’s very fair and that the questions are right out in front so that the horses can see and understand them. There are definitely some legitimate questions — the final water at fence 19 features a big ol’ jump into the splash — and the rolling terrain here is certainly going to play a part. You can tune in for the CCI4*-S cross country beginning at 1:06 p.m. EST. 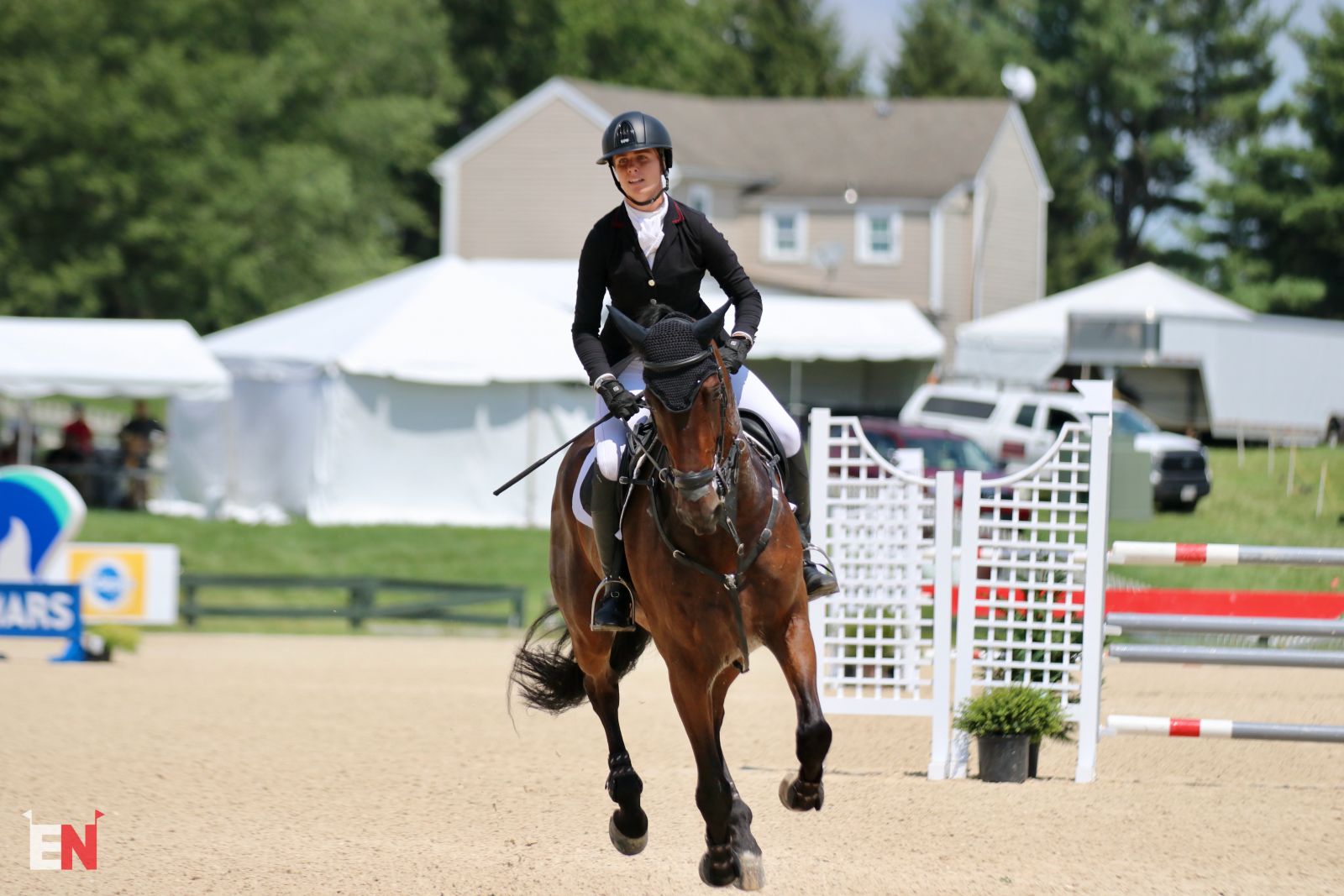 Show jumping also played mix-maker in the CCI3*-S, where problems were mostly scattered throughout, and it will be Caroline Martin with Redfield Dexter who take the lead into tomorrow’s cross country finale on a two-day score of 26.2. Dressage leaders Kurt Martin and Debbie Adams’ D.A. Lifetime did not have a rail in hand and did lower one but will still be in a competitive spot in 2nd place on a score of 27.2.

Caroline’s here with six horses this weekend, and she’s over the moon to have so many rising stars in her string. A few years back, Caroline started up her own business selling and competing horses for Paul Hendrix and Emil Spadone, along with Kelly Hutchinson, and she says she’s eternally grateful to have lucked into such a wonderful partnership. Every horse that comes into Caroline’s program is for sale, but if they stick around they begin competing with her — and now she’s looking at some truly competitive horses that collect top placings left and right as they progress up the levels. 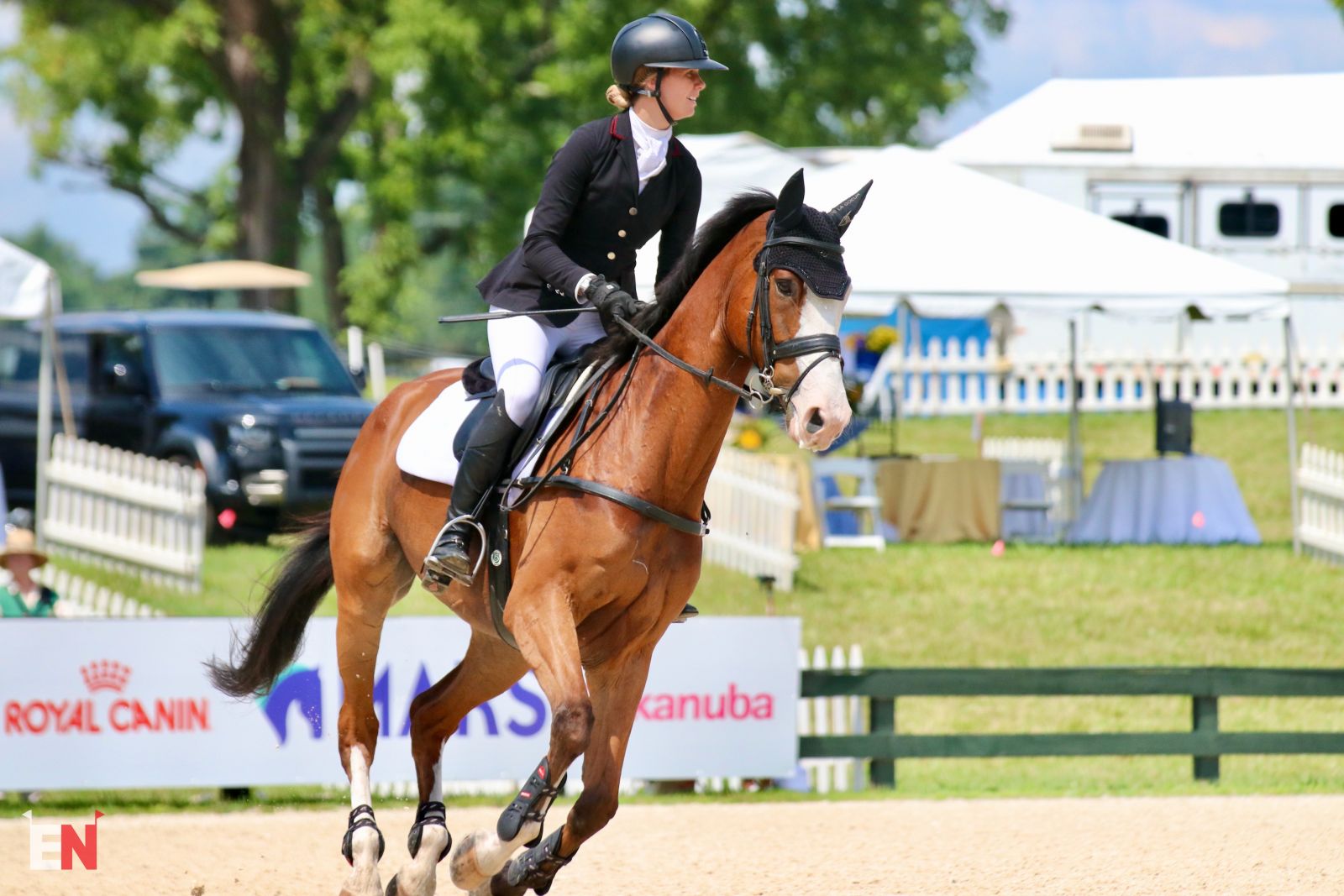 Caroline says she systematically selects her horses’ schedules, having to balance being away from home competing with also being available to sell horses back at home. So she’ll select events where she gives her horses more educational runs and then others, which may keep her away longer, where she really goes for it and wants to win. At the end of the day, she wants to make sure her horses are properly produced and confident, even if they show incredible talent that can be tempting to move up and increase the pressure.

“The biggest thing is my business partners,” Caroline said. “They have such great eyes for horses and they send me a little bit of everything from amateur horses to quality young horses to going eventers. I honestly think some of my four- and five-year-olds could be even better than this group, but I’m just so lucky.”

The top five in this division is also rounded out by big movers who collected double clear rounds this afternoon. Buck Davidson and DHI Showman, who is owned by Sami Crandell, moved from 9th into third, adding nothing to their dressage score of 27.5. Ariel Grald and Annie Eldridge’s Isla de Coco as well as Chris Talley and Hannah Salazar’s Faramund ironically will hold on to the tie they found themselves in yesterday, only now the pairs move into a tie for fourth instead of 14th.

Alyssa Phillips and Cornelius Bo Do It Again in CCI2*-S

It’s been a year of winning for Alyssa Phillips, who is celebrating her 25th birthday today and did so in style thanks to two fault-free jumping rounds to finish on a score of 27.5. The pair collects their 11th consecutive win at this level — Alyssa laughed as she told me if she hadn’t moved Cornelius Bo up to test the waters at the Intermediate level last month, this would have made 11 wins in a row. Even so, it’s a remarkable accomplishment for this pair, and Alyssa says right now she’s working on teaching the 7-year-old Hanoverian gelding by Concours Complet to become more efficient over cross country. But it’s also all about confidence; clearly she’s found a recipe for success with her up-and-comer, and she wants to ensure he keeps his confidence as his career progresses. Alyssa will also take home some extra prize money as she also takes home the Piedmont Equine CCI2*-S Under 25 top honors.

Caroline Martin had herself a successful weekend in the CCI2*-S as well, taking home second and third aboard Galwaybay Blake (28.1) and HX Group Redfield Kings’ King’s Especiale (28.4).

Looking to the Preliminary divisions, which also wrapped up today, Sharon White and I-Quid (27.3) and Ryan Wood and Bellavista (29.6) won their respective divisions are dominant cross country performances. We were thrilled to see a very happy looking Donner back out for a spin with Lynn Symansky; Lynn always planned to take it easy today to stretch her 18-year-old off-track Thoroughbred’s legs, and the pair ended their weekend in eighth place with just some time added on cross country. 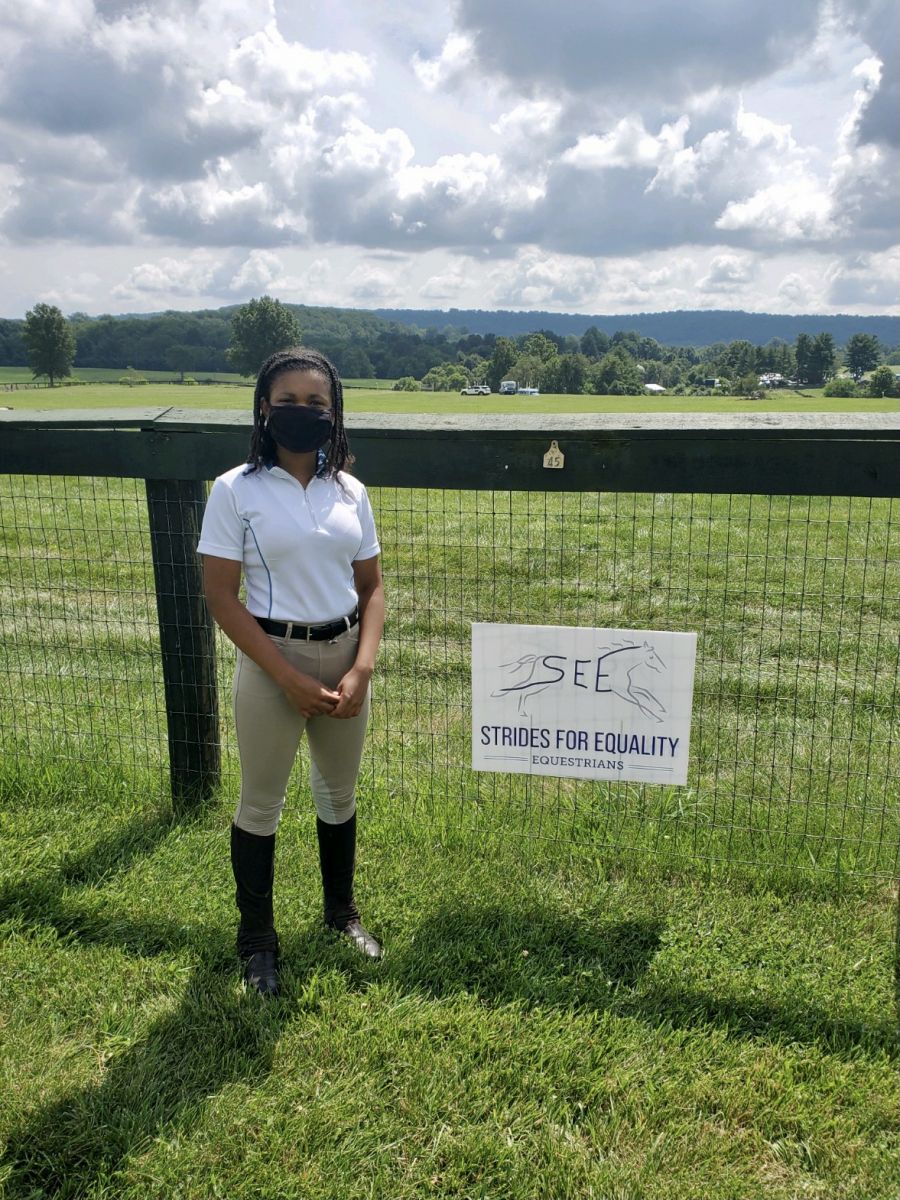 Ava Lambert was one rider from White Oak Stables to come take in the action today. Photo courtesy of Amaya Lambert.

It was particularly special to go and hang out with the group from White Oak Stables, whose diversity program and efforts to provide access to horses to the local community are worth checking out. Thanks to efforts from both MARS Equestrian Great Meadow International as well as Strides for Equality Equestrians (SEE), a tailgating spot was donated to members of White Oak Stables, who came today to take in the show jumping. We’ll have an opportunity to spend more time with these young riders tomorrow on cross country, and a special congratulations to Ava Lambert, who was able to hand out prizes to the CCI2*-S top finishers at the end of the day today.

It’s easy to get caught up in the competition itself — and for good reason, especially at an event of this caliber — but seeing new riders get to see the sport at its top levels for the first time will always be one of my favorite experiences. I hope that this is the first of many events who will partner with SEE to welcome more programs like White Oak’s to the show. The more, the merrier, if you ask me! 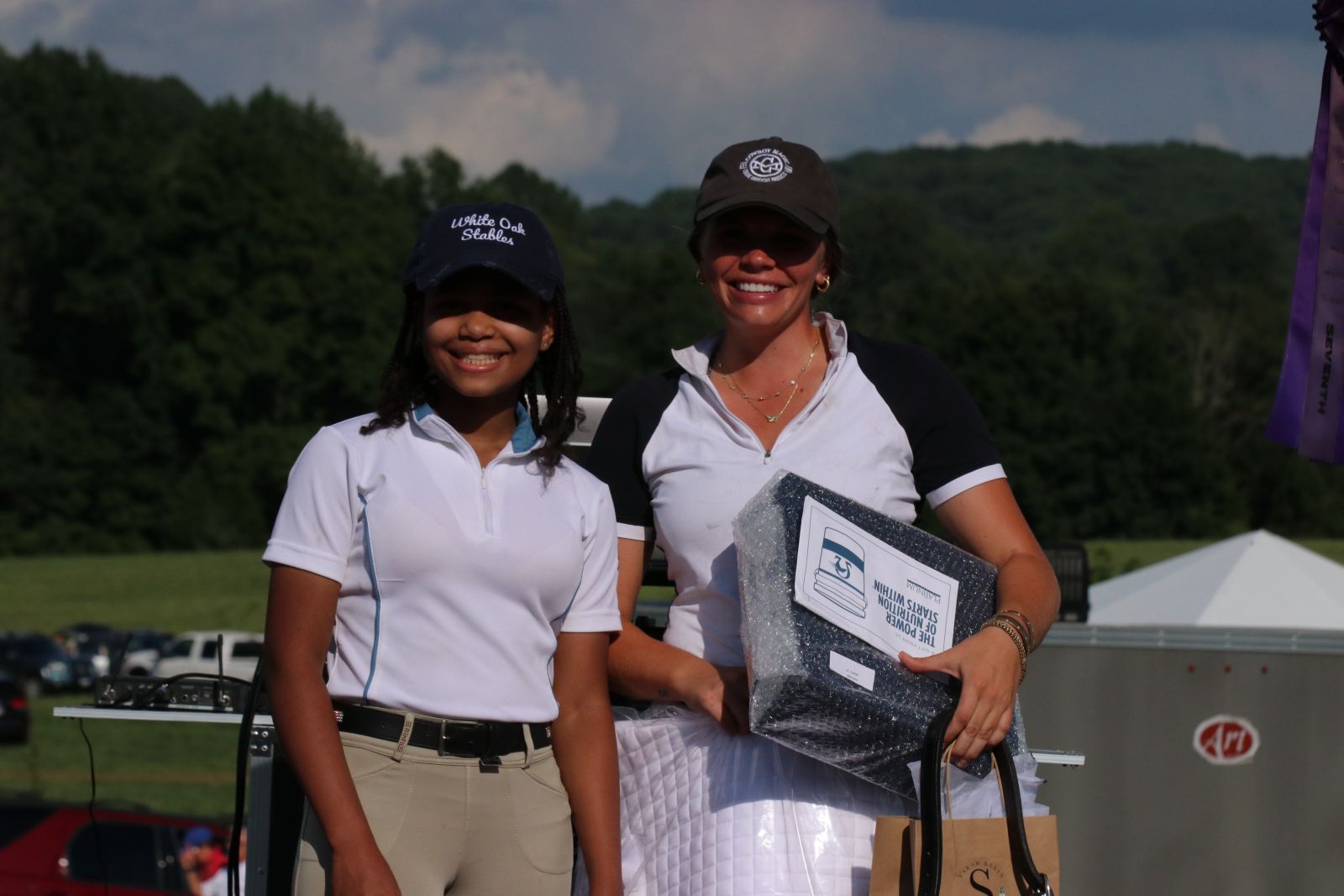 Ava Lambert and Alyssa Phillips at the prizegiving. Photo by Sally Spickard.

I’d also like to give a massive thanks to the organizers and volunteers who have been working tirelessly in the heat to ensure the event is running smoothly. I don’t always hear many thank you’s — and am certainly guilty of not saying it enough myself — so please remember to thank a volunteer, or better yet to spend some time volunteering when you have the chance.

We’ll have much more for you tomorrow, so stick with us for the grand finale of an epic weekend in Virginia! This post will be updated further with more photos.