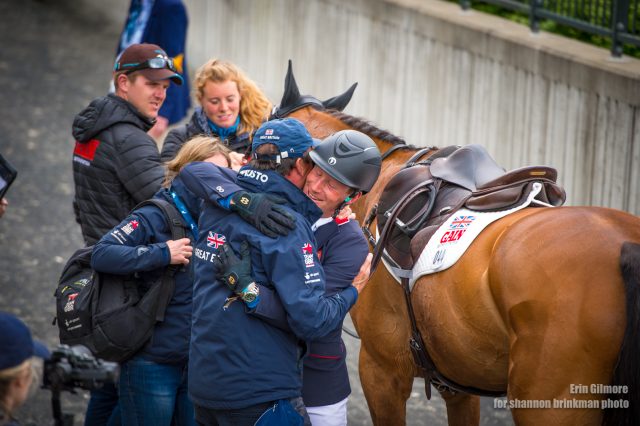 Just thirteen obstacles (sixteen jumping efforts) stood between our remaining competitors and the completion of the 2019 Land Rover Kentucky Three-Day Event. Read on to hear what some of our top finishers and a few five-star first-timers had to say about their rounds today and their plans for the future.

Oliver Townend (GBR) 1st place on 25.3: “I’m obviously very happy with Cooley, he’s a fantastic jumper. He’s a really, really careful horse and he tries his best for you. He likes to have his own way approach-wise. He likes to be sightly dead to an off-distance, he likes to have a little bit of a gap at his verticals, so it was just my job to give him a bit of room at the verticals and have plenty of canter for the oxers and as always he’s tried his best for me today.”

“It was a bit of a different situation — I came from behind last year and it’s a lot nicer going in third place and narrowly jumping a clear round and letting the rest of them be under pressure. So obviously you watch the other guys outside and these two lads (Boyd and Tim) must have done some job within the round because obviously I’ve know Tim’s horse for most of his life and I saw Boyd’s outside and he must have ridden well to say the least because when I heard the crowd go wild and obviously I didn’t have a fence and I didn’t have a time fault, I thought, ‘My God, he must have done some job, boy.’ But obviously the round went to plan.”

“We had a little rub at the Land Rover water tray, but again he’s a very good jumper and even when he touches the fence he generally touches it very, very lightly and then apologizes for the next six. he’s just a very, very cool horse but it was definitely the most pressurizing round that I’ve ever ridden under and I was just very happy with the way he performed for me and I’m glad I didn’t muck it up for him.”

Boyd Martin (USA) 2nd place on 27.9: “I was thrilled with my guy today. He doesn’t give you the most confidence in the warm up, he was jumping all over the shop and twisting and I heard these two giggling up here in the warmup. But he’s a brave little horse when he gets in the ring and he’s a bit like Tim’s horse, he just spooks just that little bit. I’ve got to say, I do think he loves a bit of atmosphere and a crowd and I think he tapped the first fence a bit and I thought, “Aw crap, this could be a long round,’ but then at the second fence he really tried so I thought, ‘Well, we’re in with a shot here.’”

“He’s been difficult in the combinations. He usually can jump really, really big over the first part and get too close to the second part so I felt like I had to really, really come in slow and short to the fence 4ab. Once he cleared that I knew I was in with a chance for a clear round, but all in all I couldn’t be more happy and satisfied. Obviously it would be great to win [a Rolex watch] but Christine Turner who owns the horse and bought him as a young  horse and came through a few riders and had a few ups and downs for the horse. Obviously last year was a bit of a disappointment year, and then this year he’s come out blazing and I just have a big sort of sigh of relief that he sort of exceeded my expectations and I think he’s only going to grow and get better from this event.”

Tim Price (NZL) 3rd place on 30.9: “[Xavier Faer] is a bit of a surprise, you’re never quite sure what you’re going to get until you get out there. He’s spooky and so in a way he’s quite simple to work with because I know that it’s going to be there it’s just a matter of how much it’s going to be there. Liverpools — he takes a real special liking to or a disliking or whatever you want to call it and the whole middle of the arena was like an ocean of water trays, of liverpools, today so that felt like something that we really needed to overcome there and I was hoping for the best there.”

“He’s jumping really well and keeping his shape even. I could feel him looking at the odd things, but he’s maintaining a good feeling so that’s what I think helps us out on a day like today. He jumped beautiful. He’s just a lovely, big honest horse and I really enjoy riding a horse like him. I think he’ll come on from this. He’s an exciting horse as he gets more established at this level.”

Lauren Kieffer (USA) 8th place on 46.0 with Paramount Importance: “We probably wouldn’t have had the [one time fault] if [Paramount Importance] hadn’t have trotted. He spooked at the camera crane. Luckily with Bug, he trots all the time, so I’m very used to it, so that was probably our one second there. But he was super – this was his first five-star and he just jumped a beautiful round, I was thrilled with him he’s such an amazing horse. I’m ecstatic.”

Hannah Sue Burnett (USA) double clear round, 11th place on 48.4: “[Harbour Pilot] was awesome. Really good. Show jumping is our hardest phase for sure, so it was nice for him to go in there and be so kind of regular and rideable, as ridable as he can be. He tried really hard — he was awesome in the triple, like really staying up in the air for me. [The course] rode really well, it’s hard to make the time so I was trying really hard to do that and then just got a little bit close to a few verticals, but he was a really good boy.”

Ariel Grald (USA) top placed five-star first-timer, 12th place on 50.5: “[Leamore Master Plan] was good. He had one rail down at fence five. He just kind of lightly ticked it. He’s usually really, really careful so I don’t know if he just had a moment of distraction because I felt like I placed him reasonably well, but he just can be a little strong in the show jumping so I had a couple time faults. He jumped great, he really does try. He tries to jump clear really hard.

Will Coleman (USA) double clear round, 13th place on 50.7: “It feels good. I’m very proud. The horse tries his guts out and he deserved a clear round. He tried hard. [The course] was technical, it’s obviously extremely technical. Especially on horses that ran hard yesterday, but it’s not maybe quite as big here in some years but Richard builds a great course and I think it will prove influential as it goes on.”

Chris Talley (USA) 27th place on 76.4: “[Unmarked Bills] went in there and jumped – I didn’t give him a great ride to a vertical – but he struggles with tension and having rails down when he gets tense. But he wen’t in there and really jumped really well and I kind of stood off a vertical but he added in and we had that one down, but it was amazing.”

On their first Kentucky experience…

Ariel Grald (USA): “I’ve learned a lot. I’ve definitely learned that he is ready for this level and it’s just the beginning. We’ve got a lot of homework to go do, mostly in ride ability and strength, but we’ve learned a lot of good lessons and know where he needs to improve and he’ll be back better for next time.”

“I was hacking up here earlier, up to show jump, and I was just looking at the cross country jumps like, ‘Oh we actually did that yesterday,’ it was all such a blur. It’s been  fantastic weekend and hopefully the first of many.”

Chris Talley (USA): “It’s amazing. It’s incredible. For my first five-star I couldn’t have asked for it to go any better. It finally all seems like it’s a reality. After finishing cross country yesterday it was definitely a reality and then it’s all just becoming more and more a reality.”

On what’s next and future plans…

Oliver Townend (GBR): “[Cooley Master Class] has come out here, knock on wood, better than I expected again and let’s just hope that he makes it back next year and tries to defend his title again. We shall see, but look, he knows there’s absolutely nothing now. He’s been out pet since he was four years old because he’s kind of had more time off than he has done work, that’s for sure, but he’s going to be the pet of the yard for the rest of his life, hopefully. And let’s hope that he makes another one.”

Boyd Martin (USA): “I don’t know, we’ve got to regroup and I was thinking [Tsetserleg] could go alright if I went to Burghley or there’s the Pan American Games which I think they might probably want to just get an older group of horses just because they need to get qualified for the Olympics.”

Tim Price (NZL): “My guy, Xavier Far, I really see him as a good Burghley horse. He’s never going to be right up there on the flat with dressage, but I do think there will be some more improvements. So provided he comes out of this competition well, which he looks like he’s very healthy, he’ll get back home and have a holiday and then our focus would be hopefully for Burghley for a good shot.”

Lauren Kieffer (USA): “Hopefully lots more big things. [Paramount Importance] felt great today. You never know how they’ll feel after their first five-star. It’s hard. We wake up really sore so I imagine they have to be twice as sore and it’s special horses that kind of push through that and try as hard as they normally do so I’m thrilled.”

Hannah Sue Burnett (USA): “[Harbour Pilot] is going to have a little break right now and then, I don’t know, maybe Burghley? That would be cool to try again.

Ariel Grald (USA): “I’ve got a bunch of young horses. [Leamore Master Plan] is  really my only upper-level horse at the moment, the rest are sort of Prelim and below. So hopefully he comes out of this well and we’re hoping for a trip to Europe in the second half of the year so hopefully this earns us that spot.”

Will Coleman (USA): “We’re going to regroup when we get home and I don’t know. We’ll see”

Chris Talley (USA): “We’re not entirely sure. [Unmarked Bills] is a horse that has kind of exceeded everybody’s expectations to do this. We kind of came into it not knowing totally if he could. We always kind of believed in him but we knew it would be a challenge for him, but he really kind of stepped up to the plate this weekend so he’s going to have a long vacation, a well-deserved vacation, and then we’ll make some more plans. I don’t know about for this fall, but maybe next year, maybe bring him back to the Bluegrass State.”