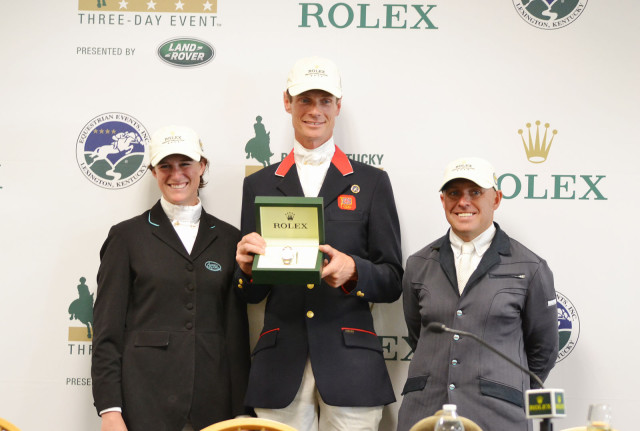 William Fox-Pitt now has three Rolex watches — one for himself; one for his wife, Alice; and now one for his sons Oliver and Thomas to fight over when they’re a bit older, he said in this afternoon’s press conference following his win with Bay My Hero. And while it’s his third victory at this event, he said it’s been just as sweet every time. “Each win is special for its own merits,” William said. “You still can’t believe it happens. The odds are stacked against you in this sport. I didn’t come here expecting to win; I came here with two lovely horses expecting them to go well.”

His longtime owner Catherine Witt purchased “Moonie” as a 4 year old, and William has had the ride on the horse since he was 5, which has helped them solidify a wonderful partnership in the six years they’ve been together. “He’s really part of the team, part of the family,” William said. “He’s a real character; we all love him at home.” And while he adores the horse, William hasn’t sugarcoated the fact that the “tubby” horse’s weight is always a challenge, which makes the fact that they finished on their dressage score that much more impressive.

“He felt fantastic today; he’s a real little fighter,” William said. “He came out this morning thinking he was king pin. He liked the trot up and would have liked to do it again.” But when it came time for Moonie to enter the stadium — right when the crowd was cheering wildly following Lauren Kieffer and Veronica’s double clear — William said the horse tried to scoot right back up the ramp. But he settled beautifully and never put a foot wrong for William, giving him yet one more four-star winner in his barn of eventing dynamos.

Lauren had a fairytale weekend with Veronica, who she’s ridden since the mare was a youngster. Originally sent to Lauren’s barn by Scott Keach and Sharn Wordley to sell, Lauren fell off and broke her arm the first time she competed the mare, and she asked Karen O’Connor to take over the ride while she mended. Karen ended up liking the mare so much that she bought her in partnership with Team Rebecca, and when a fall ended her competitive career, she handed the reins back over to Lauren.

“We took all last year to work out the small details of our partnership,” Lauren said. “I felt like it really came together this weekend … She came into the show jumping feeling like her normal self and not like she had just did cross country, so I was really happy about that.” The mare will now enjoy a long vacation, and Lauren will enjoy food again, as she said she’s been too nervous to eat for the past 36 hours. Affectionally called Troll in the barn — and sometimes “Piranhica” — because the mare isn’t much of a snuggler, Lauren said she doesn’t hold that against Veronica in the slightest: “I’ll take that fighting spirit when it comes down to this.”

While I know Buck would have loved to hand Carl and Cassie Segal a win with Ballynoe Castle RM this weekend, they still had a fantastic performance, besting their finish from last year to move up one sport to third. It’s a relief to see Reggie back and looking so good after suffering a bone bruise last year when he bumped his stifle on a water pipe in his stall. “He’d never missed a day of work and never been lame before until then,” Buck said. “I decided to skip the fall season with him and just brought him back into work in November when everyone else was on a break.”

Then just a couple months ago, the horse was in the hospital with pneumonia, and he just came back out at Red Hills and has only continued to look better and better. “The heart that this horse has his unbelievable,” Buck said, noting the horse has had quite the busy social schedule since coming back into work, most notable serving as a key member of the wedding party at super groom Kathleen Blauth’s nuptials. Kathleen also does the trot sets on the horse, and Buck said the horse has also benefitted from David O’Connor’s help on the flat and Silvio Mazzoni’s guidance in the show jumping.

As for the special trophies given today, Ballynoe Castle RM was named Best Conditioned Horse, Jan Byyny and Inmidair won the Zeppa International Trophy for Best Turned Out at both the horse inspections — Caitlin Calder is the groom behind the magic — and Kim Severson and Fernhill Fearless won the Bank One Trophy for highest-placed owner/rider. Congrats to all the big winners!. Stay tuned for much more from Rolex.