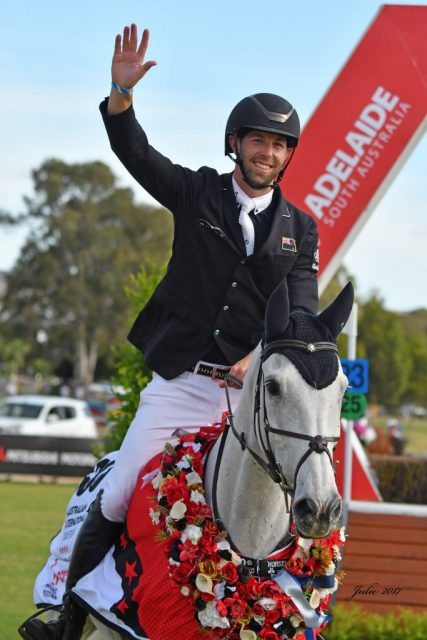 We’re sad to report that Clarke Johnstone‘s Balmoral Sensation has been unexpectedly retired from competition at the age of seventeen following an injury sustained on cross-country at the Sydney Three-Day Event at the beginning of May. The New Zealand Warmblood gelding (Senator VDL x Aberzanne, by Aberlou) had been a frontrunner for a spot on the Kiwi team for Tokyo this summer, with an impressive career behind him that included 15 international victories from 35 starts. Among those starts were three appearances at CCI5*: third place on his debut at Adelaide in 2015, fifth place at Badminton in 2016, and a well-deserved win at Adelaide in 2017. He also finished sixth individually at the 2016 Rio Olympics, where the New Zealand team finished in fourth place. Such was his reliability across the country that his last cross-country jumping penalty dates all the way back to early 2014. In his 29 international completions, he’s never finished lower than 12th – and he’s finished in the top five 26 times, making his record one of the very best in the sport.

“This post is an especially hard one to write. After jumping a fantastic clear cross country round at Sydney 3DE, with his ears pricked all the way to the finish flags like he always does, unfortunately it became clear that Balmoral Sensation had picked up an injury and that he wouldn’t be continuing in the competition. Sadly this has also ruled us out of Olympic contention for the Tokyo Games,” he wrote.
“At his age of almost 17 years and after all of the wonderful moments and memories that he has given me, I have made the very sad decision to call time on Ritchie’s brilliant Eventing career. More than owing me nothing, I owe Ritchie a huge debt of gratitude and he has gone home to New Zealand now to start his retirement that he has so thoroughly earned. It is hard to put into words what Ritchie means to me but I’ll give it a go. This could end up a bit of a novel!” 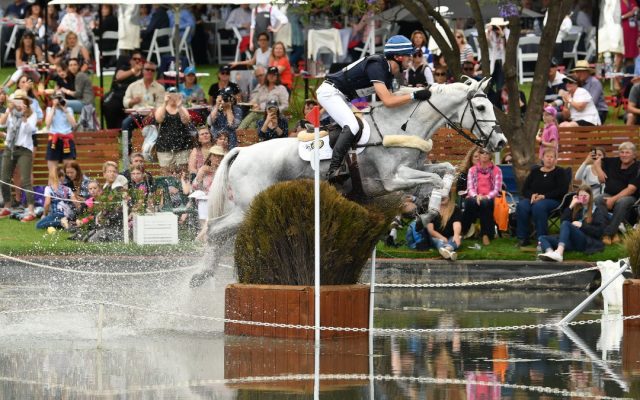 “In the seven years that I have ridden Ritchie he has taken not just me, but my family and friends on the most incredible journey. All over the world. From Adelaide and Aachen to Badminton, Brazil and even Belguim, and always in the prizes. Through the highs and lows of sport. The triumphs and the tears, Ritchie has been the most amazing team mate. Brave, honest and so so clever. There wasn’t anything he wouldn’t do for me or me for him.”
“Without a doubt the crowning glory of our career was the Olympic Games in Rio where we placed 6th individually. He tied up badly when we arrived in Rio and for the week leading up to the start I could hardly ride him, he was only running on half power to be honest. Our dressage was a little flat although I was happy under the circumstances. I was very worried about the cross country with Ritchie not feeling himself. I needn’t have been. As soon as I jumped a warm up fence and Ritchie knew it was cross country time he was on! Ritchie’s long term friend and travelling groom Lydia Beales had to come to our rescue and help keep him calm before it was our turn to go.:
“On the course Ritchie gave me the most incredible ride. He just never missed a beat from start to finish. The first water came early at fence 4 and had a log in with a tricky distance to a narrow log in the water and everybody was doing 4 strides to the log and some even 5. I had walked it time and time again and I just knew that the direct 3 strides would suit Ritchie better and it would be faster but I was very nervous about it not working out how I thought. It was the Olympics after all, not really the place to take a chance. I knew that Ritchie could do it and that I could trust him, he could do anything in my eyes, and he did it absolutely perfectly. Living up to his name as usual he was just Sensational around the rest of the course. I got my favourite photo of our whole career jumping into the water too. It always makes me smile thinking about that water jump.” 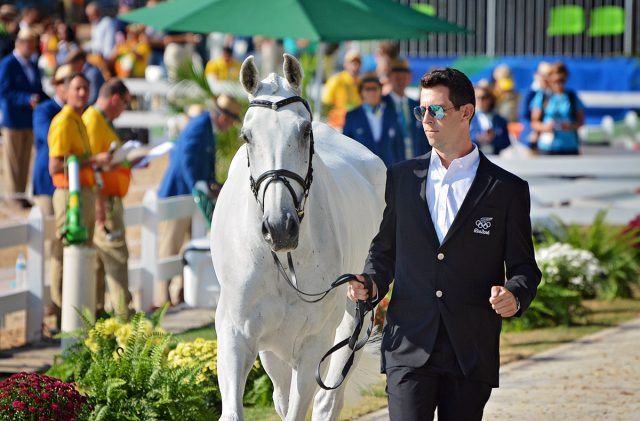 “That was the best feeling of my life at the time jumping clear around the difficult Olympic course with my mate. Probably only bettered by our clear round in the team showjumping the following day to put NZ in gold medal position. Sadly the team medal wasn’t to be and then Ritchie was completely out of gas in the individual jumping and I also made a dumb mistake so no medal there either. Ritchie gave his absolute best though and I was so proud to be taking home the best horse in the world in my eyes.”
“Funnily enough, after the Olympics Ritchie was ranked the number one Eventing horse in the world rankings with the points he gained at Adelaide 5 star, Badminton and Rio in the preceding year. One of my other proudest moments in our career along with our win in the 5 star at Adelaide 2017, 5th place at Badminton, 5th place at Aachen (and team gold) and all of the titles Ritchie won at home in New Zealand. He won them all actually, some more than once. His unbelievably good eventing showjumping record was also pretty special.” 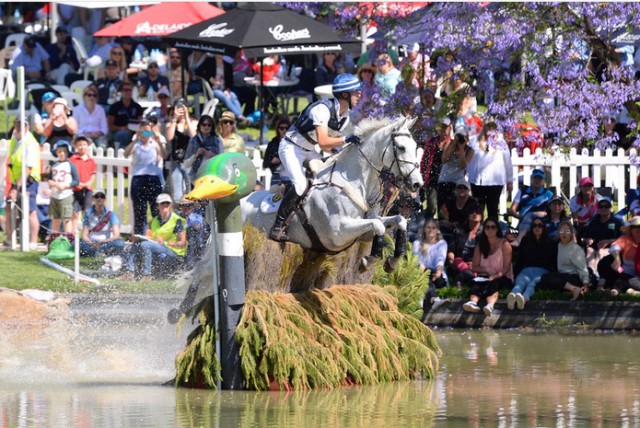 “He is way more to me though than the wins and placings. He has the coolest character. I was trying to describe his personality to a journalist one day which isn’t easy as he can be all manner of things depending on the mood he is in and the situation. I think it was Helen Firth who summed it up perfectly with “mercurial.” I love him for it though although it did make it hard to get him just right for the dressage, not too hot and not too lazy. I think Aachen 2018 was the best test we did in our career with Martin Plewa giving us 78%, which was a thrill.
“It isn’t just me who Ritchie is special to, though. As I mentioned earlier he has taken my family and friends on an amazing journey and we all love him for that. Even some people we didn’t know personally loved Ritchie and it always made me very proud when people would point at him at shows in NZ and say, “there’s Ritchie.” This would also not have been possible without the amazing care and attention that Ritchie has had from some fantastic girls over the course of his career. Ritchie took Lydia Beales and I around the world (twice) and gave us both so many amazing memories as well as some sad ones when it didn’t all go to plan, like when Ritchie was injured just before the WEG in 2018 when we felt like he was absolute at his peak. I know he means as much to Lyds as to me. Thank you Lyds. There are too many people that have played important parts in his career to list but some other fantastic people who gave Ritchie their all are Ange Carson, Maddy Crowe, Megan Stephens and Holly Fitzgerald. That white tail does not happen by itself, let me tell you! But their care and attention extended far beyond just having him gleaming white.” 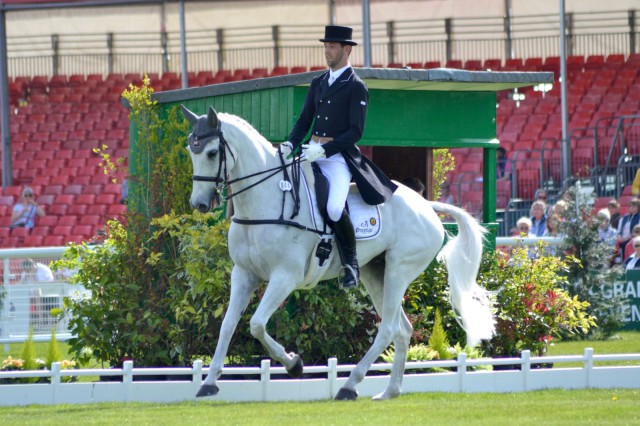 “I also couldn’t have achieved what I did with Ritchie without my fantastic coaches Vaughn Jefferis and Vanessa Way, and also a lot of guidance from Erik Duvander. Again there are others but I can’t name everyone or I’ll be writing all night! You know who you are so thank you. Alec Jorgenson, John Pulford and Christiana Ober who were the core of his horse health team, thank you too.”
“To Mum and Dad (Rob Johnstone and Jean Johnstone) and my Grandma Shona who bought Ritchie for me, I know he has given you all as much happiness as he did me but I can’t thank you enough. What a ride its been. Nick Brooks for all of your support from the beginning with Ritchie. The late nights strategising over a bottle or two of red which usually descended into us both ranting about how great Ritchie and Versace were. To Codey who has let his life be somewhat ruled by what is best for Ritchie for the last few years and followed us around the world, thank you Babe.”
“It’s the end of an era for me and Ritchie. It’s been a great one though.”
All of us at Team EN wish Ritchie a very happy retirement. Go roll in all those muddy patches, champ.