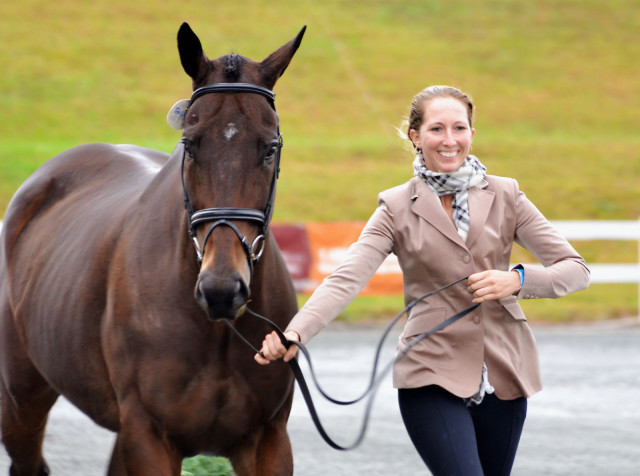 Kendal Lehari and her 9-year-old OTTB were having a great run around Derek di Grazia’s CCI3* cross country course at the Dutta Corp Fair Hil International this past weekend. Unfortunately, Kendal pulled up close to home and took her horse back to the barn; announcers said that the horse looked to be a bit off. Once the horse was examined, it was found that a tendon in his front left had ruptured, effectively ending “Frank’s” eventing career.

“He was great going around the course, handling the complexes really well,” Kendal said. “When  came to the second to last fence, which was a hanging log to an angled brush, he stumbled on landing, regrouped, and jumped out well. He felt fine the first few strides, but then felt weird. I thought he had lost a shoe or stepped on the clip, but when I pulled him up it was clearly something else.”

Back at the barns, Totally Frank’s left front leg was examined, and x-rays were taken. In a devastating turn of events, it came up that the superficial digital flexor tendon was swelling rapidly and had ruptured. Kendal then set about preparing to take him back home to her home base in Ontario, only wanting her partner to be comfortable in the process.

“He traveled great and we’re just trying to keep him as happy as possible,” Kendal said. “I plan to do everything I can to ensure the best recovery possible for him. My hope is that with a good rehab program I may eventually be able to do dressage or jumpers with him. The eventing community has been unbelievably supportive and helpful; we really are a unique sport filled with wonderful people.”

Totally Frank was Kendal’s mount as she targeted the 2015 Pan American Games and the 2016 Olympics in Rio. Now, she’s trying to put together a syndicate to purchase her next upper-level partner as her goals of representing Canada on the world stage continue. For further information on Kendal’s future endeavors, please visit her website.

We’d like to wish Frank a quick and smooth recovery, and also Kendal the best of luck as she searches for a new partner.