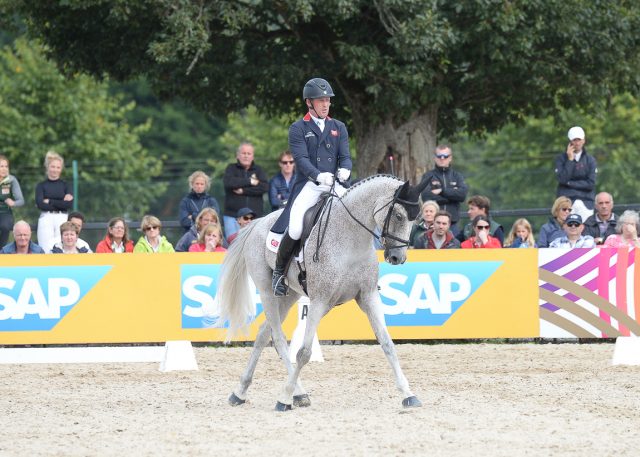 A close-fought battle saw familiar faces lay down serious scores in leg five of the Event Rider Masters, which sees the series head to Millstreet International Horse Trials in Ireland. And after missing much of the summer season with an injury, Oliver Townend proved he’s the true comeback king.

The 2016 series champion piloted 2017 Burghley winner Ballaghmor Class to the top of the leaderboard, delivering a score of 21. This sees them sit well ahead of the competition overnight, and it’s a four-star personal best for the phenomenal gelding who briefly held the record for the lowest-ever dressage score at Badminton.

For Oliver, who lost much of his summer season after a crashing fall, it’s a relief to come back at his best.

“I’ve had a bit of a strange season,” he admits with a grin. “But the horses are going well, and I’m very nearly sound. I’ve had all sorts of bits and bobs [to mend], but we’re getting there – and as long as I’m right by the big occasions, that’s what I’m focusing on while I’ve got these good horses. It’s the Badmintons, the Kentuckys, and of course, the Europeans and Burghley coming up – and of course, the ERM. It’s a very important competition for our sport, and we’re very grateful for it.”

Ballaghmor Class showed his class indeed, particularly in his open and expressive canter work. This allowed him to gain further ground on the leaderboard on a day when the canter sections of the test proved particularly influential, but Oliver and ‘Thomas’, as the quirky gelding is known at home, didn’t let the pressure of the day affect their accuracy. 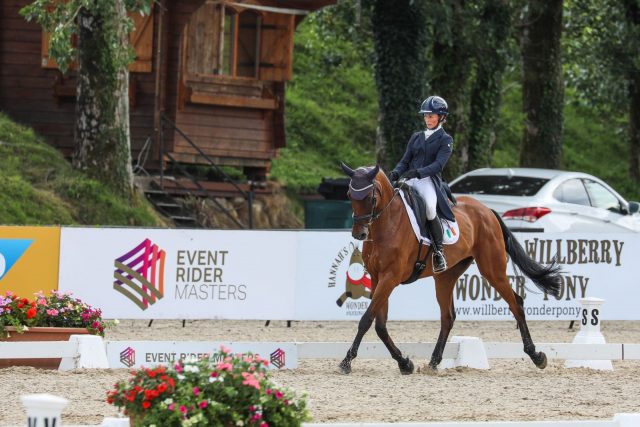 Ireland’s Sarah Ennis and Horseware Stellor Rebound put up an excellent fight for the home side, taking second place overnight on their score of 25. Remarkably, this is the horse’s first run since last summer’s World Equestrian Games, at which he took team silver.

“I’m delighted with him – he’s one in a million,” said Sarah, who finished on the podium at Chatsworth last season with the fifteen-year-old gelding.

“We unfortunately missed our only planned run on Sunday – he got caught with a shoe and was a bit sore, so he couldn’t run. This is his first time back in an arena since WEG, and I actually couldn’t do the arena familiarisation, so I was a bit worried he’d be frightened of the camera scaffolding! But he was really good.” 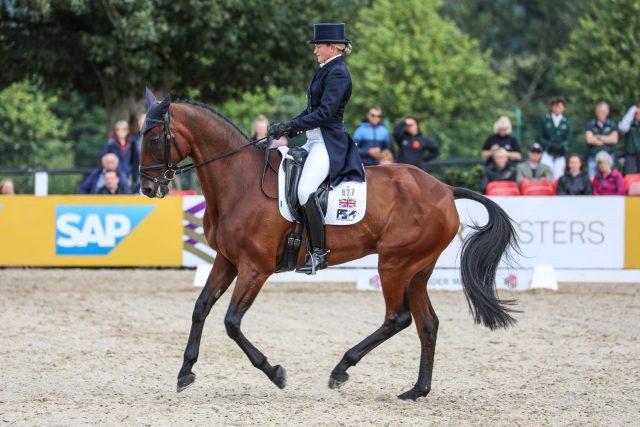 Former Wiesbaden winners and fan favourites Sarah ‘Cutty’ Cohen and Treason are this leg’s Wildcard entrants, and they made the most of the opportunity, posting a 26.3 to take third place. Just behind them, New Zealand’s Lucy Jackson and Superstition, who enjoyed their first podium finish this spring at Chatsworth, laid down a score of 26.4 for equal overnight fourth with Millie Dumas and Fabien.

“I don’t think you’re supposed to whoop after dressage, but woo-hoo!” laughed Lucy. She had reason to celebrate – Superstition’s score was an enormous personal best for the gelding, who ordinarily averages in the low 30s.

“He’s always been a super talented horse in this phase, but I’ve always kicked myself that my test tactics haven’t been strong enough, so he hasn’t done enough in this atmosphere. But today he nailed it.”

Despite high hopes, some of the hot favourites in the class failed to reach the upper echelons of the leaderboard. It was crunch time for Australia’s Bill Levett, who sits second in the 2019 rankings and, with leader Jonelle Price not competing, has an opportunity to take the top spot. But a slightly tense and underpowered test with his stalwart campaigner Shannondale Titan saw him score a 30.9, which puts him in overnight 18th. Just ahead of him on 30.2 sits his countryman Chris Burton and Graf Liberty, who are also on the hunt for the series leaderboard this weekend.

“He probably wasn’t feeling quite himself,” says Bill, whose horse has scored in the 20s in his previous eight international runs. “It’s just a reminder that they’re not machines. Yesterday, he felt a little out of sorts, but I don’t know what happened in there – he just doesn’t really like this test as much as the other one. He’s a tall, leggy horse and the walk pirouettes and the way the patterns work don’t suit him. Hopefully he’ll be back on form for Lignieres. For now, I haven’t got the score I’d normally get, so I have to try to jump a clear round [tomorrow morning] and then take it from there.” 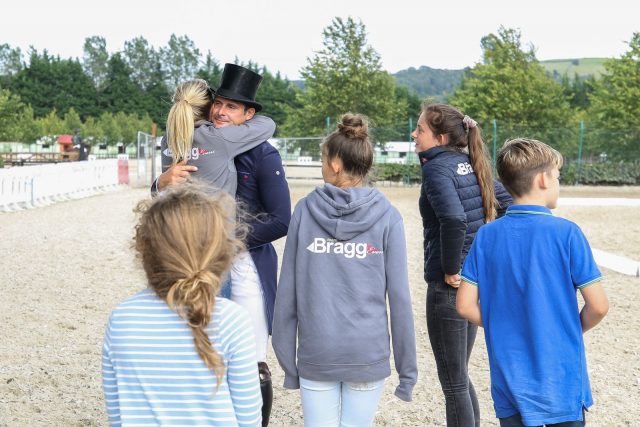 A family effort: Alex Bragg with his wife and daughters after his test. Photo courtesy of Event Rider Masters.

2018 Jardy winners Alex Bragg and Zagreb looked set to challenge for the lead, with scores trending around 22 at the halfway point of the test. But an unscheduled flying change saw their canter work begin to unravel, and they ultimately had to settle for 28.2 and ninth place overnight. But riding horses at this level isn’t just a job or a hobby, it’s a lifestyle – and as Alex knows all too well, when something affects another part of your life, it’s hard not to carry that into the ring with you.

“We had two big mistakes in the canter work, which he’s very secure with normally, but I’ll be dead honest – it’s been a very tough week for me,” says Alex, who rode to ‘This Is Me’ from The Greatest Showman after discovering – through Facebook –  that one of his owners had decided to pull all of her horses from his yard. “I got in there and I got a bit emotional – I’d picked the music because of it. But these things happen, don’t they? This is eventing; this is life – we can crack on and jump tomorrow, and that’s super.” 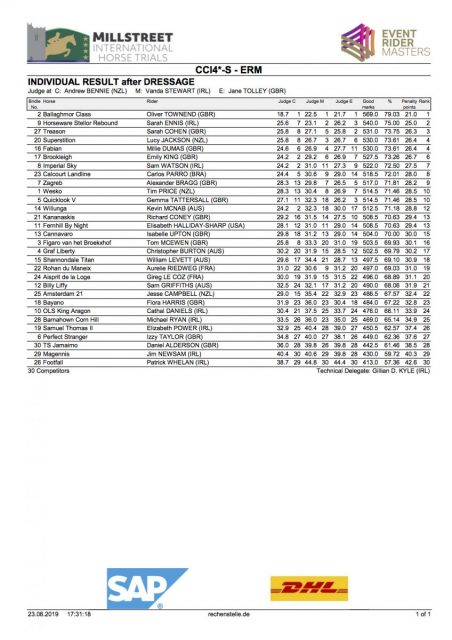 The full leaderboard at the conclusion of day one in Millstreet’s ERM leg.