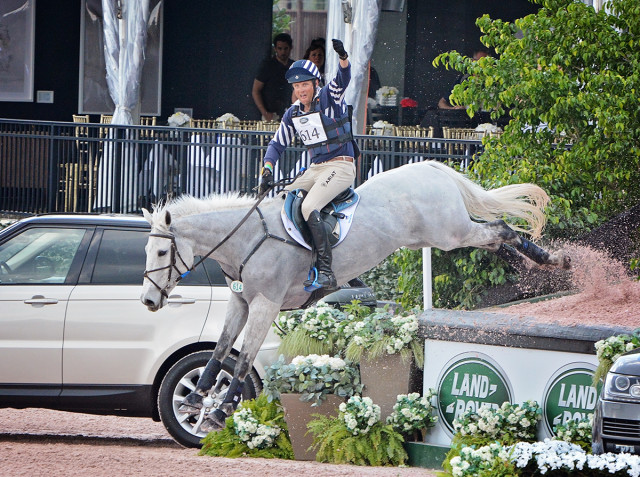 Do we need to invite Michael Jung to the $100,000 Land Rover Wellington Eventing Showcase next year to see if anyone can dethrone Boyd Martin? He remains the undefeated champion of the event after clinching the win for the third consecutive year, this time aboard Craig and Gloria Callen’s Welcome Shadow.

A former hunt horse for Craig, Boyd commandeered the 12-year-old Irish Sport Horse mare as an eventing prospect in 2013 and never looked back, taking her from the Novice level through to her first four-star at Pau last fall. She delivered a personal best dressage score of 26.5 yesterday, jumped clear over a show jumping course Boyd thought was “bigger than Rolex” this morning, and then stormed around clear with just 0.8 time penalties on cross country to win on 27.3.

“You wouldn’t get a horse that tries any harder than Welcome Shadow,” Boyd said, adding that he was extremely proud of how she performed in all three phases. “The caliber of horses was the best we’ve seen here. The show jumping was bigger and wider. … The cross country was a real test, and I think it’s been good that they’ve gently built it up like this, but the cross country was influential this year compared to years where it wasn’t that influential.” 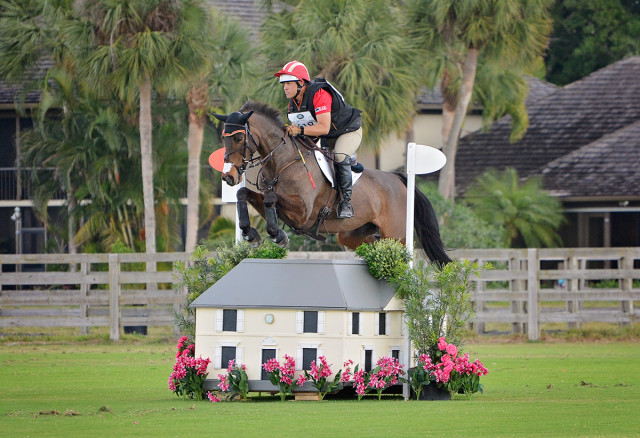 Buck Davidson and Petite Flower were one of just two pairs to make the optimum time of 3 minutes, 59 seconds, which moved them from sixth up to finish in second place on 30.9. The 15-year-old Thoroughbred mare owned by Sherrie and Randy Martin was dynamite in her cross country school earlier in the week, Buck said, and she was spot on again today.

“I cross country schooled this week and called Sherry and Randy and said she’d never gone so well and been so straight … She was straight as could be today. She’s very fast, and she’s a fun horse to ride around these kinds of events,” Buck said, adding he also “was happy with the dressage, and she tried her heart out in show jumping.”

Doug Payne and Vandiver were the only other pair to make the time thanks to a gutsy route up the mound that shaved previous seconds off their time. That speedy round moved Doug and “Quinn,” a 13-year-old Trakehner gelding owned by Debi Crowley, from 10th up to finish in third place on 34.2. 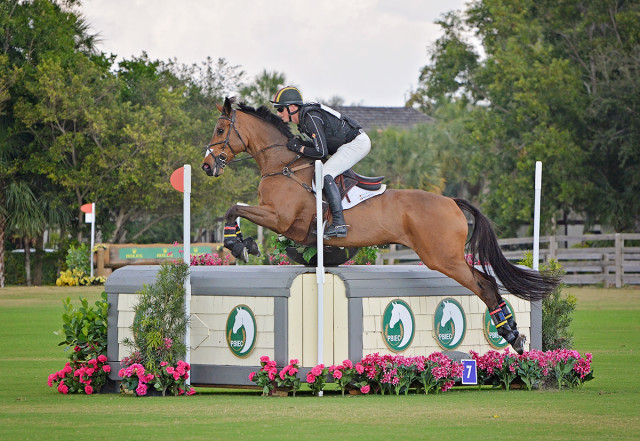 “This is an incredible competition that will prove to be valuable for the horses who are able to come here early in the season,” Doug said. “There’s more atmosphere than you would see anywhere aside from Rolex domestically. We rarely have the opportunity to have this type of atmosphere.”

While Doug said he was disappointed to have the last fence down in show jumping this morning, the horse was flawless on cross country. “He’s a bit of a dirt bike, and I’m learning to trust him more.” (Debi couldn’t be here this weekend to watch Quinn compete, so we are sending her a big EN shoutout!)

Welcome Shadow, Petite Flower and Vandiver are all aiming for the Rolex Kentucky Three-Day Event, and Boyd said he thought the showcase was an ideal preparation for bigger competitions to come later in the spring. “I personally don’t think (events like the showcase) knock the horses around too much since it’s a 4-minute track. These are four-star questions at Intermediate height, so it tuned (Shadow) up a bit.” 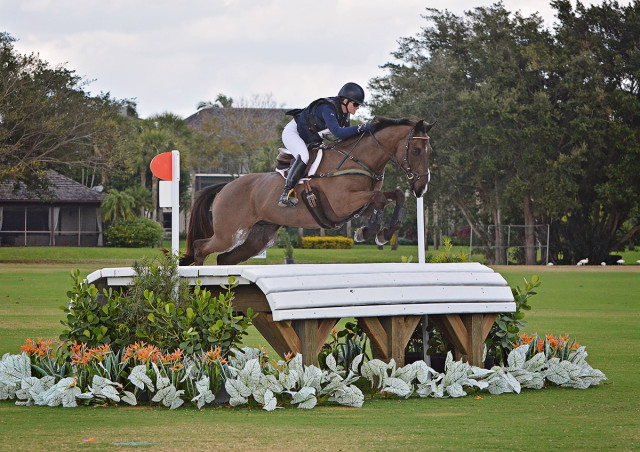 Angela Bowles and Bliss III jumped clear with 6.0 time penalties to move from 16th to finish ninth on 41.7. William Fox-Pitt was the only rider to finish both of his rides in the top 10, jumping a beautiful clear round on RF Quarterman to accumulate 5.6 time penalties and move from 19th to 10th on 42.9.

As Boyd said, cross country definitely proved to be more influential this year. Angela Bowles and Novelle and Joe Meyer and South Paw were both eliminated on refusals. Joe also retired Clip Clop on course after one refusal at the water at fence 13 and a second refusal at the corner at fence 17. 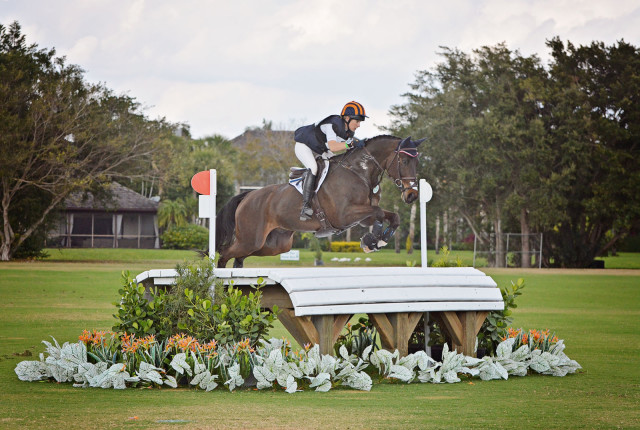 We saw two riders falls, first when Kylie Lyman fell from Lup the Loop at the corner after the water, and she was up and OK right away. Our thoughts are with Marilyn Little, who withdrew leader RF Scandalous after falling at fence 17 with RF Demeter, who rolled over her before getting up and galloping away. The mare is uninjured.

“Out of an abundance of caution and with facility protocol, Marilyn was transferred and transported through TraumaHawk to Delray Medical Center,” Palm Beach International Equestrian Center said in a statement. She was released from the hospital at approximately 5:30 p.m. EST with no major injuries.

Allison Springer and Arthur were another combination that had a glance off at the corner at fence 14. “He was actually great,” Allison said after her ride. “That combination I should have taken more time. It was my fault he was awesome and really I was trying to go for it.” Click here to relive a play-by-play of cross country in our open thread. 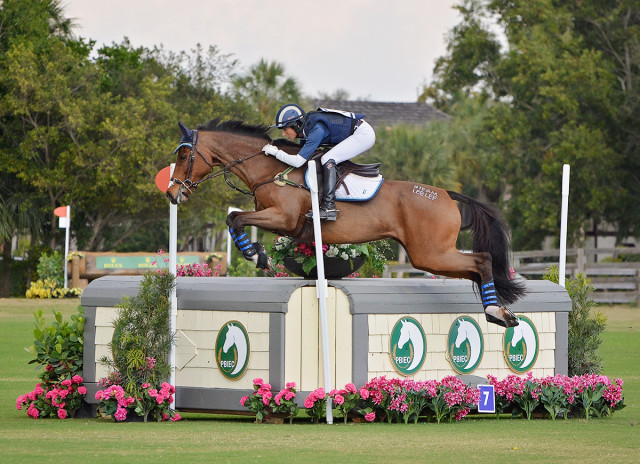 More love for #teamleelee at the Wellington Eventing Showcase. Photo by Jenni Autry.

Mark Bellissimo, CEO of Equestrian Sports Productions, said he was thrilled with the event, which is now in its third year. “We wanted to demonstrate the great athleticism of both horse and rider in a compact environment to allow people who hadn’t seen eventing to experience it,” he said.

“Next year we’ll try to push this event and make it something very special. … There’s room for this type of event. This is not to displace traditional eventing, but it’s an opportunity to provide a lens into eventing for people who might not get that experience.”

Mark confirmed that he hopes to create a “triple crown” series of three showcase events for hefty prize money, linking Wellington to a similar showcase at Tryon and another venue.

Event organizer Jim Wolf added: “Mark saw eventing as an underserved audience. He elevated dressage in this country to an all new level, and I think we can do that if given a chance for eventing. We see an audience that has an opportunity to put more prize money in the sport.”

We always get a bit spoiled coming to the Wellington Eventing Showcase as the first major competition of the season, and it’s been another fantastic weekend here in Florida. Click here to catch up on all of EN’s coverage from Wellington. As always, there are more photos on EN’s Instagram. Thank you so much for following along with us this weekend. Go Eventing. 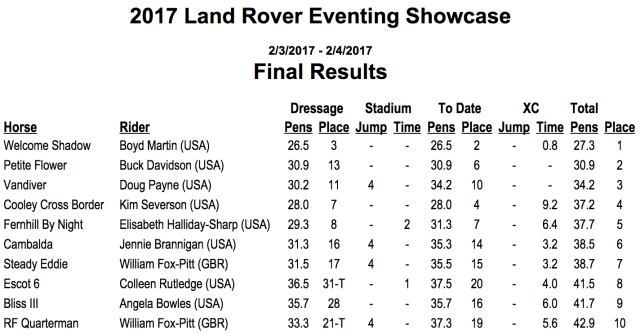