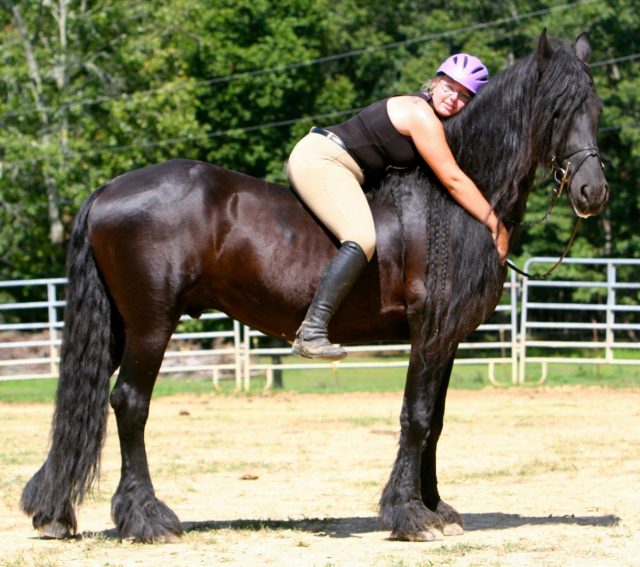 Once a horse girl, forever a horse girl. Jessica Thoma, shown here before a rare disease forced the amputation of both her legs and one arm, is now determined to return to the sport she loves. Photo courtesy of Jessica Thoma.

Up until a few months ago, Jessica Thoma was living a pretty normal — if horse-crazy — life. She was 24 years old, happily engaged, and recently promoted to Team Leader at Tractor Supply Co. in Crossville, Tennessee. She started riding at age 5 and loved horses even before that, and grew up surrounded by animals, also raising and showing rabbits and Boer goats.

“I fell in love with eventing when I was around 10 years old,” she recalls. “My parents had gotten me a computer game called ‘Lucinda Green’s Equestrian Challenge.'”

Virtually through the game, she tackled four-star cross country tracks around the world — Adelaide, Kentucky, Badminton and Burghley — and dreamed of experiencing the same rush in real life. When she got her horse Albert, a 15-year-old Thoroughbred with glossy brown eyes and an athletic jump, she knew for sure that she wanted to event.

“Albert loves eventing!” she says. “Jumping is in his blood. If you point him at a cross country question, he will take you to it.”

The pair has done schooling shows but not a recognized event — “always the hopes and the dreams, but never could make it happen,” she sighs — but that was the goal they were working toward … before Jessica got sick last year. 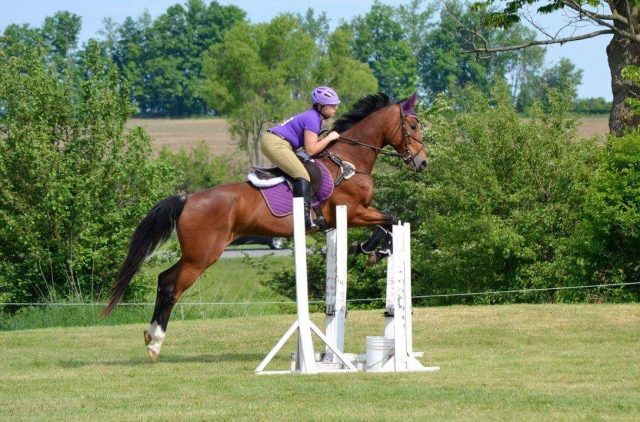 Jessica and Albert at a schooling show in her signature purple. Photo courtesy of Jessica Thoma. 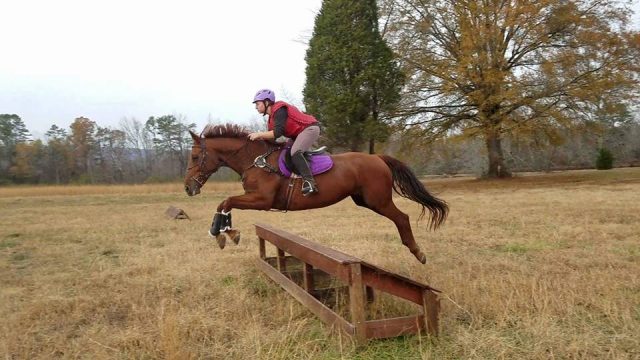 Jessica in her element. Photo courtesy of Jessica Thoma. 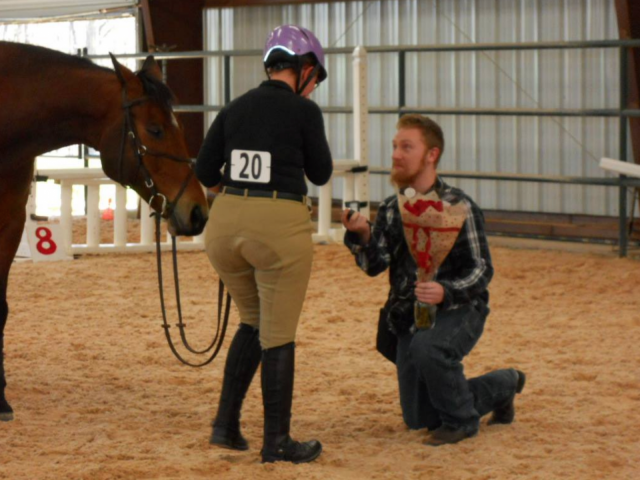 Brandon’s proposal to Jessica in 2016 — awwww! The ring is a heart-shaped horseshoe. “He’s the love of my life,” she says. Photo courtesy of Jessica Thoma.

It started with a rash. Jessica wondered if she was allergic to the baby chicks Tractor Supply sells in the springtime. But multiple allergist and dermatologist appointments proved inconclusive. “Then I started feeling weak all the time and my bones and muscles would ache constantly,” she says. “I had to quit Tractor Supply on Oct. 22 because at that point I could barely walk. I couldn’t eat, either, and I lost 30 pounds in a month.” 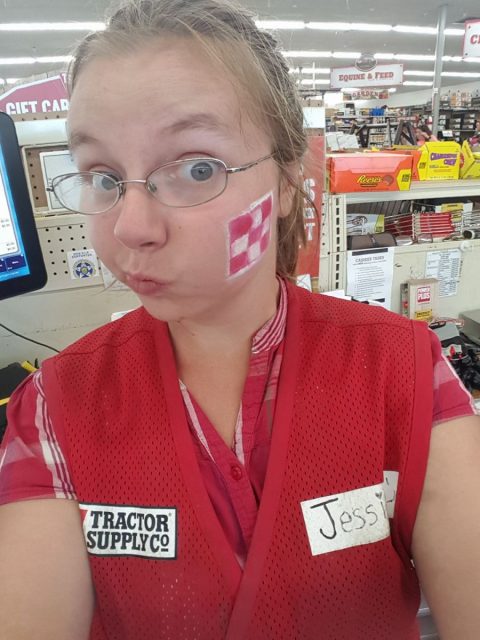 Misdiagnosis continued until she developed a huge skin lesion on her side. From a biopsy doctors were able to diagnosis Jessica with Polyarteritis Nedosa (PAN), a rare disease that results from vasculitis, or blood vessel inflammation, causing injury to organ systems.

On Dec. 3, 2017, two days before her 25th birthday, Jessica was admitted to Centennial Hospital in Nashville. “It was pretty shocking. I woke up on my birthday with tubes going in every part of me,” she says. The doctors had needed to intubate her because she couldn’t breathe on her own. “That was scary. I couldn’t talk, and I couldn’t move my left arm or my legs. They progressively died as a result of my severe case of PAN.”

Jessica’s PAN affected her small and medium blood vessels, threatening to attack her larger vessels as well. She nearly died three times over the course of her hospitalization. On Jan. 3, Jessica underwent surgery to amputate both of her legs and her left arm.

“I basically made medical history because they’ve never seen it attack all four limbs before,” Jessica said. “My right hand, I still have it, but it’s very damaged.”

Support and Strength of Will

Jessica had about two weeks between having her intubation tube removed and the amputations. Despite barely being able to talk or eat, and knowing that she was about to about to lose three out of four limbs, her spirits improved: “I am really lucky that I had my family and wonderful fiancé Brandon with me basically 24/7. They really kept me sane and kept me going.”

But there were some dark hours, too: “I had my bad days, and some of those days were especially horrible. I felt like such a burden to everyone. I was a person who always did everything for myself. Now I had to depend on my family, Brandon and my nurses to help me do the tasks that were once so simple for me. Eating, drinking bathroom — I couldn’t do those things myself anymore and it hit me very hard.”

During that time, and especially post-surgery, she found support from Facebook. “I remember waking up from my surgery being in excruciating pain, but when I got back to my room my brother and Brandon were there. I asked them to take a picture of me and I posted it to Facebook ….”

“I also had a friend set up a GoFundMe account to help me pay for hospital bills, which blew me away at how much people donated! I received so many letters, I have a huge stack of them at the house, I’ll keep them forever! My wonderful friend I get my hay from for my horses donated $600 worth of round bales to keep my horses fed while I was gone. It all brought me to tears, my faith in humanity was completely restored with how much love I received!”

A chemotherapy drug called Cytoxan stopped the spread of PAN in her body, but she’ll need to manage it via medication for the rest of her life. As for managing her emotional well-being, she immediately turned to her horses.

Back in the Saddle

“I always knew I would ride again, I was determined to do so,” Jessica says. “I didn’t see my horses for five months while I was hospitalized, but I did get to see my precious dog a couple of times! Of course I got to see pictures of my horses, but of course that’s never enough for a horse crazy girl. I went home on April 5th, and the first thing I did was go see my horses!” 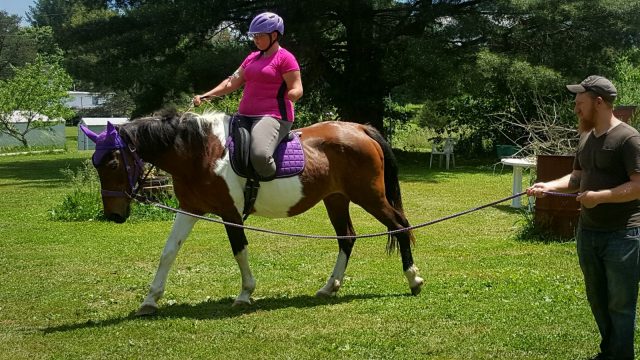 Jessica working on the lunge with Brandon, riding Sugar, a 20-year-old Spotted Saddle Horse mare she rescued from starvation in 2009. “She is my heart pony,” Jessica says. “I wouldn’t give her up for anything. I haven’t shown her much but we did take first place in a dressage schooling show at River Glen a few years back!” Photo courtesy of Jessica Thoma.

Jessica is already back in the saddle, albeit on the lunge line, but no doubt she’ll be riding independently soon. Depending on insurance, she could have prosthetic legs in a couple of months, although the arm prosthetic is going to take longer. As an animal lover, she is tickled to be going through Hanger clinic, known for making the tail prosthetic for Winter the Dolphin, whose tail was amputated after she got caught in crab trap lines. Despite overwhelming odds against survival, Winter was able to adapt to her new physical form, embrace a new swim pattern and recover completely. 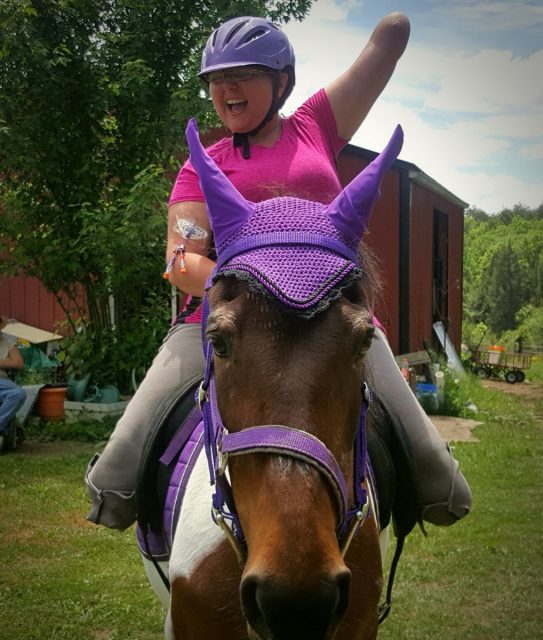 Feels good to be home again, especially when home is the back of a horse. Photo courtesy of Jessica Thoma.

Likewise, Jessica aims to not only survive but to thrive, and ultimately make her way back to the cross country start box. Longterm, she says her goal is to teach kids and hopefully get a degree in riding instruction. She keeps supporters posted on her progress via Instagram (@TripleAmputeeEventer) and Facebook (Jessica Thoma).

“I have some really big dreams and plans and I have a HUGE support team cheering me on!,” she says. “I will do eventing again soon! Hopefully next year! #TripleAmputeeEventer isn’t just a tag I put on my photos — it is my dream.”