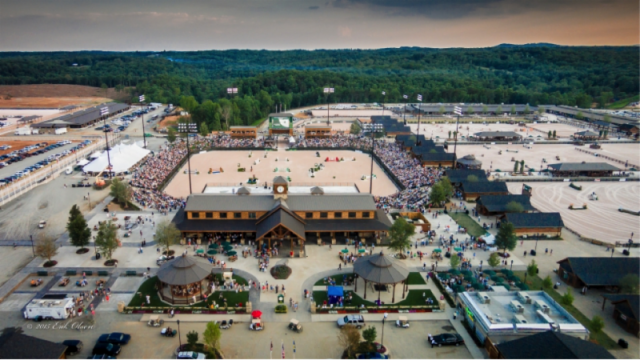 With Bromont’s contract to host the 2018 World Equestrian Games having been terminated last month, the search is on to find another suitable host venue for the massive event within a two-year timeframe.

Mark Belissimo, managing partner of Tryon Equestrian Partners, confirmed today that the Tryon International Equestrian Center is working with the USEF to keep the 2018 WEG in North America.

The United States Equestrian Federation has communicated via letter to the FEI their strong support of the bid to host the 2018 Games in North Carolina. William Moroney, Chief Executive Officer of USEF commented, “While it is unfortunate the games will not be able to take place at Bromont, the USEF believes it is critical that the WEG remain in North America as intended so that the globalization of the sport can continue.” USEF President, Chrystine Tauber added “Mark Bellissimo and Tryon Equestrian Partners have a brand new venue, deep experience and sufficient resources to make this happen. They have the USEF’s full endorsement.”

Both N.C. and S.C. state and local governments have expressed support of the bid. The last WEG in North America was held in Lexington, Kentucky in 2010. The games had an economic impact of $201.5 million over the event’s 14 days according to a financial study commissioned by the state.

“North Carolina’s infrastructure and natural beauty make our state a natural fit to host the 2018 World Equestrian Games,” said Governor McCrory. “We will support efforts to host the Games in our state which will provide not only a positive experience to all those attending, but a significant boost to North Carolina’s rapidly growing economy.”

S.C. Governor Haley echoed support for the WEG: “We have a long and rich history in equestrian competition, and welcome the opportunity to showcase our state’s world-renowned hospitality and tourism assets to the attendees and participants of this prestigious event.”

Tryon Equestrian Partners has invested over $125 million in the 1,500-acre venue over the past two years. Its infrastructure includes 1,200 permanent stalls, 12 competition arenas, a lighted international arena that seats 6,000 (expandable to 12,000) with multiple VIP areas, a large covered/indoor arena that seats 5,000, a cross country course proposed to host both eventing and driving, and access to hundreds of miles of equestrian trails to support endurance.

While it has already played host to many dressage and jumping competitions, many eventers will get their first glimpse of it when it hosts the 2016 AECs in September.

Mark Bellissimo, TEP managing partner, commented, “Our partnership built the Tryon International Equestrian Center (TIEC) to support all levels and disciplines of equestrian sport including international competitions and championships. Our partnership’s passion for equestrian sport is based on our belief that we can grow the sport in the Americas, and that this country needs a comprehensive high-profile, high-quality destination to showcase all equestrian disciplines to an expanding spectator base.”

Bellissimo also brings to the table a wealth of already-in-place human and financial resources. His organizations, which include over 150 full-time staff and 1,000 part-time staff, own three of the largest horse show facilities in the world — the Palm Beach International Equestrian Center, the Colorado Horse Park; and Tryon International Equestrian Center — and operate 38 weeks’ worth of CDI and CSI events each calendar year.

And, of course, sponsorship is presented as a major selling point:

On the commercial side, Bellissimo believes its portfolio of 130 sponsors is one of the strongest in the industry. Many sponsors have already expressed encouragement and interest in the WEG event since Bromont’s withdrawal as host of the 2018 games.

In addition to Bellissimo, the organizing committee would include Michael Stone, President of Equestrian Sport Productions and former Secretary General of the FEI, who has been involved in the WEG process for all events since the inaugural games in 1990 (with the exception of the 2014 Normandy WEG games); Sharon Decker, Chief Operating Officer of Tryon International Equestrian Center and former Secretary of Commerce for the State of North Carolina would lead the efforts on behalf of the TIEC facility, and Jim Wolf, former USEF Chef de Mission, whose 20-year tenure with USEF provided various experiences and responsibilities in U.S. WEG and Olympic team efforts.

Bellissimo further commented, “The WEG is a very challenging and complicated event. With the exception of Aachen, Germany, most venues are forced to spend many years and tens of millions of dollars investing and developing the venue infrastructure, developing the personnel, attracting sponsors, and managing logistics for the WEG. This takes a financial and operational toll by consuming scarce resources on the venue construction and team building efforts for a one-time event. We have a fully functional equestrian venue, the management team and operational staff, and the sponsor pipeline in place, so the bulk of our energy will be on operational execution and showcasing the event and the sport to the world.”

Bellissimo added, “We are uniquely and immediately positioned to hold all eight disciplines within a central venue. Further, our integrated approach to existing on-site lodging, restaurants, permanent VIP hospitality venues, and abundance of on-site and local area family activities would be attractive for vendors, sponsors, competitors, horse owners, and spectators.  In addition, there are 60,000 hotel beds within 60 miles of the venue. We are confident that these elements would create a very successful games and re-energize the WEG product.”

What do you think, Eventing Nation? Would you like to see Tryon host the 2018 WEG?