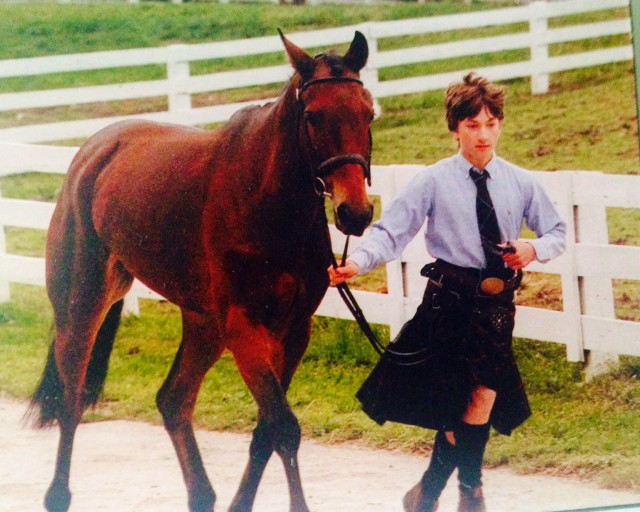 Another Bromont and Belmont have come and gone, and horsey social media is abuzz with the stories and results from the weekend. While racing fans might #hailthetail, I think eventing fans should start using the hashtag #hailthekilt. Okay, so maybe it’s not as catchy as American Pharoah’s call sign, but still. Kudos to Waylon Roberts for rocking the kilt, even as a teenager!

Subscribe to the EquiRatings Newsletter: EquiRatings is a new website that compiles and analyzes eventing statistics worldwide, and they just released their first newsletter! Check out this month’s newsletter, featuring some awesome facts and statistics on our favorite sport: [EquiRatings: The start of an exciting journey]

Clash of the Titans: The Lingfield racetrack shook with thunder as Shires raced against Clydesdales over two furlongs in the annual Flying Feathers Heavy Horse Stakes. A Shire named Jack Flash, piloted by Grand National-winning jockey Leighton Aspell, surged to lead the pack of galloping giants in a race to raise awareness for these versatile and endangered draft breeds. For a full video of the race, check out [Horsetalk: Shires speed to race victory]

Italian Dressage Olympian hospitalized after accident: Valentina Truppa was seriously injured in an accident on Sunday when the young horse she was riding spooked and fell. Valentina, Italy’s top-ranked international dressage rider, was wearing a helmet that protected the base of her head during the accident, however “the counter movement caused a blow to her head.” She is currently under pharmacological sedation and in stable condition at a specialist hospital in Siena, Italy. [Horse & Hound: Elite dressage rider hospitalized after serious fall] [Eurodressage: Update on Valentina Truppa pharmacologically sedated]

When dogs and horses don’t mix: Kjirsten Lee, J.D. is an attorney whose “Equine Law” column on Horse Nation helps clarify many legal aspects of horse ownership and stable management. This week, Kjirsten examines the layers of liability for injury as they relate to horses, dogs, and the various ways that they can frighten or hurt each other. [Equine Law: Dogs and Horses]

Equine influenza exposure in Arizona may be caused by wild burros: The BLM’s Arizona branch announced that equines near the Black Mountain Herd Management Area (in the northwest part of the state) may have been exposed to equine influenza (EI) by wild burros. Six burros have tested positive for EI, and the BLM is concerned that burros wandering near towns could transmit the disease to domesticated livestock. [The Horse: BLM Arizona issues equine influenza advisory]

Video of the Day: Yesterday, The Horsepesterer brought us video highlights from Bromont, including Marilyn Little’s winning ride on RF Demeter. Today, we bring you a blast from the past with Jonathan Holling, winner of the CCI3* at Bromont in 2012. Watch Team Wallace’s hilarious video of Jon’s celebratory streaking of the Bromont sign, which is surprisingly G-rated, considering we’re watching a world-class athlete careen across a Canadian icon in his skivvies: