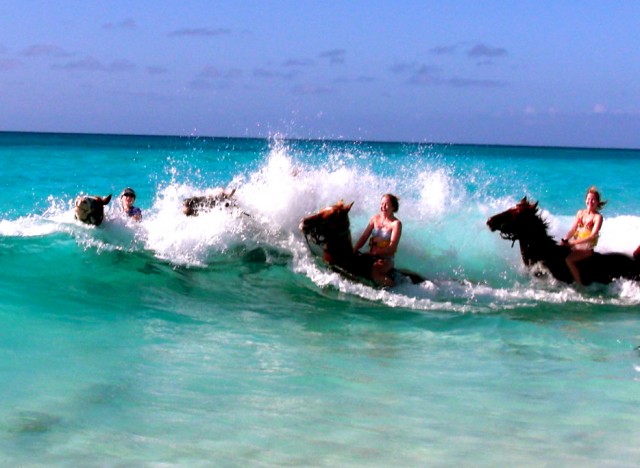 Somewhere, people are splashing through the Caribbean with horses. I am not one of them. But it’s nice to dream. Today’s news includes dreams of August one-stars, better lives for OTTBs and a nod from the Academy for Andrew Nicholson. Nope, not that Academy, though I’m sure the Silver Fox would rock  formalwear that doesn’t include protective headgear.

Nicholson simultaneously takes on biker, rugby player, race car driver. Not in a celebrity smackdown – though we’d sure love to see that. Andrew Nicholson’s been named a finalist for Sportsman of the Year in New Zealand’s prestigious Halberg Awards. A Voting Academy made up of 30 former athletes, coaches and media members will select the winner from across all sports.  [horsetalk.co.nz]

GMHA Festival of Eventing gets a star. While the folks at the Green Mountain Horse Association always put on a stellar event, this year it’s official: there will be a CIC* as part of the August Festival of Eventing. They’re hoping for a high of six degrees today in South Woodstock, Vermont, but keeping warm with thoughts of the Novice/Training Classic Three-Day, the clinic with Bobby Costello and Bonnie Mosser and $10,000 in prize money for Intermediate. [GMHAInc]

But they didn’t get to do-over their dressage test. U.K. Ministry of Defense paid over $328,000 to compensation people injured after military aircraft spooked their horses this past year. [horsetalk.co.nz]

RRTP in winner’s circle, philanthropically speaking.  The Retired Racehorse Training Project received a huge honor last weekend when the Thoroughbred Charities of America gave the organization its Industry Service Award at its annual awards dinner at Keeneland Racecourse. The award is given to an organization that best exemplify’s TCA’s mission, which includes “providing a better life for Thoroughbreds, both during and after their racing careers.” [retiredracehorsetraining]

Millions await 12-step program. Admitting you have a problem, of course, is always the first step. Horse & Hound helps you self-diagnose this week with “15 signs you’re a horse addict.” [H&H]

How do you steal a herd of Arabians? Police in Kentucky are scratching their heads. Ten horses belonging to ten different owners were allegedly stolen from a boarding facility on Jan. 2. The horses have since been recovered. “There are things we still need to work out” authorities told thehorse.com. Clearly. [thehorse]

Smartpak Product of the Day: What are the perfect accessories for a polar vortex? SSG 10 Below Winter Gloves. These bomber gloves are truly water (and booger) proof on the outside and soft polar fleece on the inside. Plus, grippy stuff on the palm and enough stretch to allow you to use your fingers without having the finger-strength of a pro climber or thumb wrestler.  Be sure to order them roomy enough to slip in hand warmer packets and your hands, at least, will be toasty.

Video of the Day: Sham-wow. Here’s a look at Boyd’s newset ride, Shamwari 4, last year in the sandbox at Pau with Swedish rider Ludvig Svennerstal: