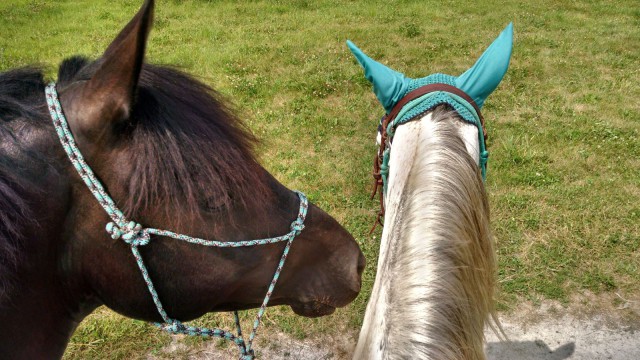 Onyx and Griffin, also known as "He who tries to munch his brother's fly bonnet" and "He who allows his fly bonnet to be munched." Photo by Lindsey Kahn.

There are few things that can top a nice trail ride with your horse. Make that horses, plural. Last week, I found myself in a time crunch after working Onyx over a few fences, and had limited time to ride my other gelding, Griffin. I didn’t want to put Onyx away without a cooldown, so I dragged him along for a nice walk on the roads surrounding the farm. The boys get along well, although I think Griffin could stand to be a little more assertive when his younger brother tries to be a mouthy stinker.

Can you ear me now?! It’s no surprise that horses communicate largely through body language. But to what extent? Researchers at University of Sussex created an experiment that tested how horses take cues from each other, using manipulated photos of a horse to test how others horses chose between two buckets of food. When the photographed horse’s eyes or ears were obscured, the test subjects struggled to know which bucket to choose, indicating that eyes and ears play a larger role in communication than previously thought. [HorseTalk]

Catching up with Lellie Ward: The Aiken Standard published a lovely article about Lellie Ward’s life at Paradise Farm, two years after a sudden and terrible accident dashed her Olympic goals. [Aiken Standard]