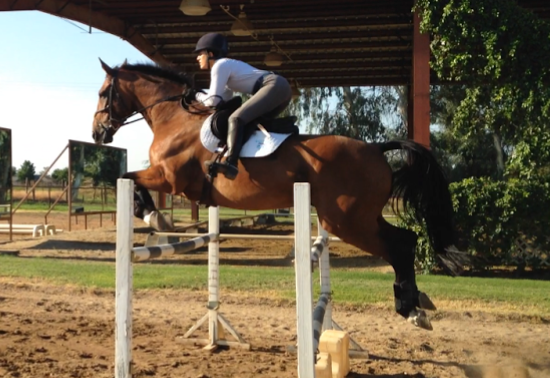 Lauren Billys may call Topanga, Calif., her home, but her ancestry contains Puerto Rican blood. Living in the U.S. is not uncommon for event riders who represent their home countries. In this case, Lauren rides under the Puerto Rican flag when she competes, proudly representing her family while working to achieve a lifelong dream.

“I have a lot of family who lives in Puerto Rico still,” Lauren said. “There’s a lot of cool history with our family. I approached the Puerto Rican Equestrian Federation about representing them as an event rider. They were really enthusiastic about it because they are trying to get Latin American countries on the map when it comes to equestrian competition.”

Lauren went on to compete at the Pan American Games in 2011, held in Guadalajara, Mexico, familiarizing herself with the Olympic cycle in the process. “This has been a process of putting together pieces over the last few years,” Lauren said.

In order to qualify for the 2016 Olympics in Rio, Lauren must complete a series of CCI events during the period between March 1, 2014 and March 1, 2015. She also must become the number one ranked rider in Central and South America in order to be granted an Olympic berth.

“It’s a unique opportunity, and it sounds difficult, but with this cycle being in Brazil, they automatically qualify to compete so I won’t have to compete against Ruy Fonseca or anyone else, which is a relief! Right now, there are a limited number of people to compete with — probably only two or three who are currently riding at the three-star level,” she said.

Lauren knew she needed to get more experience at the three-star level. She has most recently been campaigning Jitter Bug and Ballingowan Ginger at the upper levels, and she’s been very happy to get the experience she has on these two talented horses.

Recently, Lauren acquired the ride on a new horse, Castle Larchfield Purdy. The 2002 Irish Sport Horse gelding competed at the three-star level in Europe with Emma Castle, competing at Blenheim most recently in 2012.

“He was imported by Hillary Bates in 2013, and I ended up sitting on him this year and clicked with him really well, so I decided to buy him. He’s just a stellar horse. He’s super chill and laid back, and I feel like anyone could get on and ride him. I feel really lucky to have him,” Lauren said.

Lauren plans to continue competing both Ballingowan Ginger and Castle Larchfield Purdy as Pan American and Olympic prospects. “The reality is that (Castle Larchfield Purdy) has the potential to go to the Olympics. It’s a very realistic goal for him,” she said. Along the way, Lauren plans to compete in the Central American and Caribbean Games later this year, as well as the Pan American Games in Toronto next year.

In order to help her along her path to Rio, Lauren has decided to syndicate Castle Larchfield Purdy and has already sold five out of the 10 available shares. “It’s a great opportunity for someone to get involved with an Olympic dream,” Lauren said. “I feel like I have the pieces I need, and now it’s just about generating funds to get there. The Puerto Rican Equestrian Federation doesn’t have a lot of funds to support riders with expenses, but they do what they can and have been absolutely wonderful.”

Lauren is grateful to have the support of the Puerto Rican Equestrian Federation, and after competing in Puerto Rico a few times, she feels welcomed by the country and its fans. “I’ve been able to meet a lot of people behind the scenes, and that’s really helped me gain traction. A lot of people are doing what I’m doing — living in another country. It isn’t easy, but it’s nice to have the support that I do.“

If you’d like to get involved with Lauren’s Olympic dream, or if you want more information on her journey, visit her website. Best of luck to Lauren as she chases her dream to Rio.