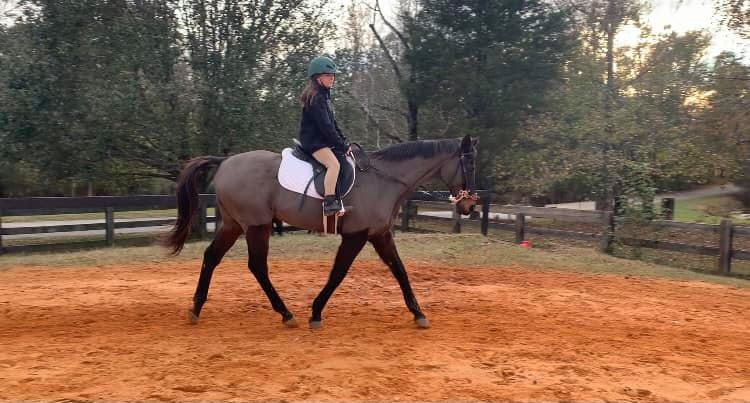 Can you guess which former five star horse this is giving a lesson? It’s the one and only Sir Rockstar who has stepped gracefully into the roll of teacher in the last several months. From Libby: “Kenzie’s second lesson off the lunge line and she has him on the bit better than me

The brain and the body often find themselves at odds when training horses. Your horse’s brain will begin to process information about how they are feeling even before a certain sensation. A lot like feeling satisfied after the first few bites of a meal — you haven’t had the time to adequately digest, but your brain knows that’s what’s upcoming, so you get a gratifying sensation. As does the horse, when they are facing something they know was challenging before, they might begin to display anxiousness before you even ask for the movement. [Understanding the Brain’s Relationship to the Body to Help Us Train]

Liz Halliday-Sharp has accomplished many things, now including becoming the first woman to win the USEA Rider of the Year award since 1981. The last time a woman took the title was Karen Stives 39 years ago. This year Liz won nine international and 16 national competitions among a host of other impressive finishes. Congratulations, Liz! [First Female Wins USEA Rider of the Year Since 1981]

While stall enrichments can be a nice addition to your horse’s home, research shows that they don’t quite do enough to improve their overall welfare. “The horse, which has lived in open spaces for the last several millennia with unrestricted access to forage and especially while establishing strong and complex social relationships with other horses, just isn’t made for living alone, isolated in a box, regardless of how well-set-up it is.” [Enrichments Aren’t Enough to Make Box Stalls Better]

Hot on Horse Nation: #TBT: How to Stay on Your Barn Owner’s Nice List