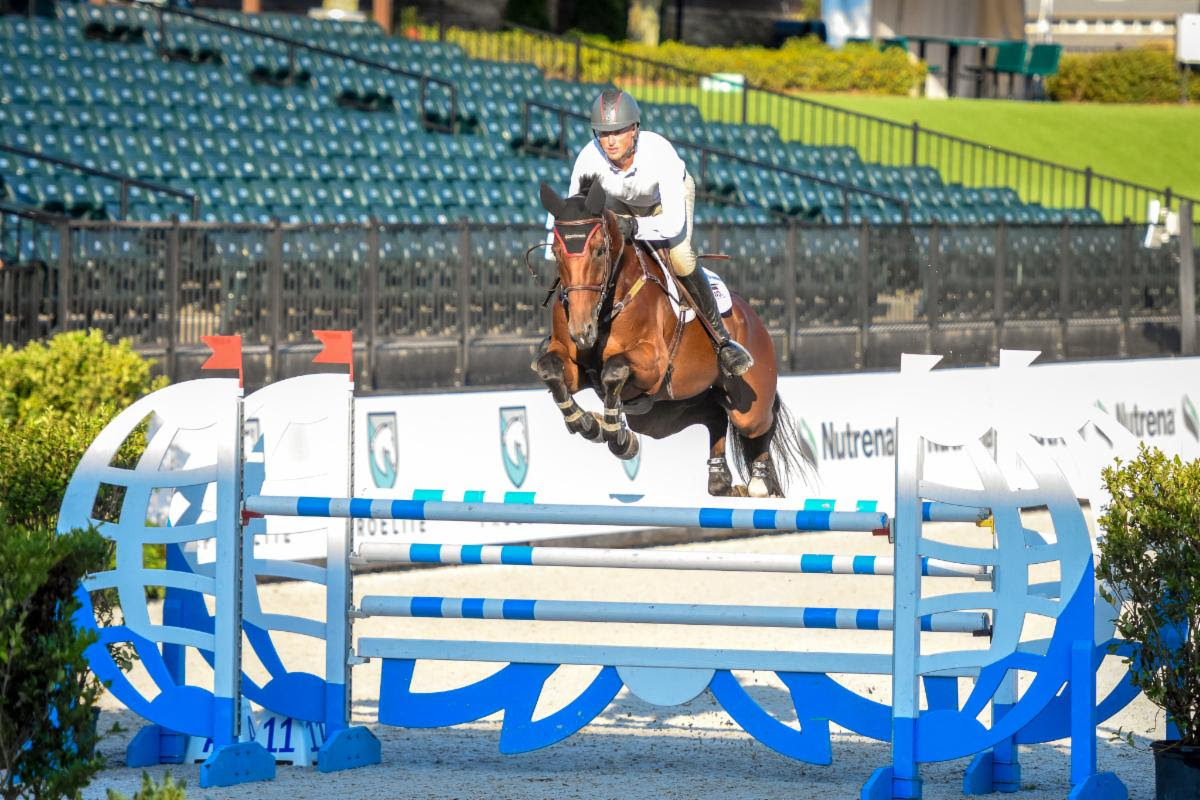 Doug Payne dibble-dabbles between show jumping and eventing, and he claimed first, third, fourth and fifth in last Friday morning’s $5,000 Horseware Ireland Welcome Stake. Doug and Quantum Leap, the 2011 RPSI gelding (Quite Capitol x Report to Sloopy) he owns in partnership with wife Jessica, were one of only two pairs to go clear: Merideth Bryans (Newborn, GA) and Guidam Sid, her own 2007 Czech Warmblood gelding of unknown breeding, scored second place on a time of 38.753 over the Skip Bailey (Wellington, FL) course design.

Doug and Quantum Leap won on a jump-off time of 34.402 seconds, while Payne collected third with Botanja, the 2006 Warmblood mare (Salvatore x Juta) owned by Courtney Alston, by way of a four-fault round in a time of 68.667. Quintessence, the 2011 Holsteiner gelding (Quinar x Victoria’s Secret) owned by Jane Dudinksy, earned fourth place on a time of 68.69 and four faults, while Getaway, Olivia Wall’s 2007 Oldenburg gelding (Contendro x Unknown), collected fifth place on the same faults and with a time of 73.314 seconds.

Doug made a last-minute decision to include Quantum Leap in the Welcome Stake, and revealed that the 5* eventing athlete typically jumps fences a bit smaller than the ones that he conquered for the win. “He went to Kentucky for the 5* in the spring, and he’ll be headed to Maryland for the new 5* this fall. It was kind of a last-minute decision to throw him in this class. He’s been jumping great, so I figured I’d put him in the Welcome Stake here, and it’s actually bigger than he’d be jumping normally in eventing.”

The gametime decision paid off for Doug, who credited his horse’s nimble athleticism despite his large stature. “He’s a very good jumper: very careful and super honest. For a big horse, he’s super maneuverable and light on his feet, so with jump-off situations he’s generally pretty efficient. He was able to pull it off today, so that’s always fun!”

Just home from his Olympic debut with Vandiver, Doug reflected on his travels that took him from Tryon to Tokyo and back. “It was an incredible experience. You always hope and dream that you’ll be able to represent your country at the Olympics, so when it actually happens it’s kind of surreal. It was unusual for sure because the COVID lockdown situation was strong over there, so I didn’t know what to expect, but my horse, Vandiver, was excellent,” Doug concluded. “He has probably the biggest heart of any horse I’ve worked with.”