The 2021 FEI Eventing Nations cup series is officially off and running, with the first leg having taken place over the weekend at Houghton Hall and Team Great Britain earning the win. The Nations Cup rules have been adapted to 2021 — you can read up on them here.

From the FEI event report of Nations Cup Eventing at Houghton Hall:

Great Britain made a dream start to the 2021 FEI Eventing Nations Cup™ series with a home win at Houghton Hall.

The British team of Tom McEwen, Mollie Summerland and Georgie Spence, who had led after dressage and jumping, took first place overall ahead of Ireland in second and third-placed Australia following three clear and fast rounds on the cross country course on Sunday. The British finished well clear on 98.5 points, with Ireland’s Joseph Murphy, Susie Berry and Austin O’Connor on a combined 115.0, and Australia’s Kevin McNab, Sam Griffiths and Sophie Adams on 136.8.

The win means GM takes 100 points for the FEI Eventing Nations Cup™ series, with Ireland on 90 and Australia on 80.

McNab and horse Willunga had given Australia a strong start in the dressage phase, finishing just ahead of Summerland with Charly Van Ter Heiden and McEwen with Class Affair. Berry and Ringwood LB top-scored for Ireland.

Indeed, McNab and Willunga incurred no jumping penalties throughout the entire competition and only 1.2 time penalties cross country to finish on a score of 31.7, claiming sixth place from a competitive field of 102 combinations. Griffiths — who celebrated his birthday just ahead of the start of the competition — was further back with Gurtera Cher, with Adams and Ridire Dorcha in third for the Aussies.

Summerland finished first for the GB team, and eighth overall, with a brilliant jumping performance as they flew around the cross country course with one of the fastest times and no penalties. McEwen matched that feat and was ninth overall, while Spence and Halltown Harley made it a hat-trick of clean rounds and came 12th.

Those brilliant rounds over the Houghton Hall course were enough to take the Britons ahead of their rivals and clinch first place.

There was further glory for Britain as William Fox-Pitt won the individual prize with a home nation 1-2-3 on the podium. Fox-Pitt and Little Fire finished ahead of Selina Milnes with Iron IV and Bubby Upton with Magic Roundabout IV. Alex Hua Tian was fourth on Jilsonne Van Bareelhof.

The next FEI Eventing Nations Cup™ 2021 event is in Strzegom, Poland in June and resumes after the Olympics in Le Pin au Haras in France, Bromont in Canada and Arville in Belgium.

Here’s the rest of the 2021 Nations Cup calendar. Click here to learn more. 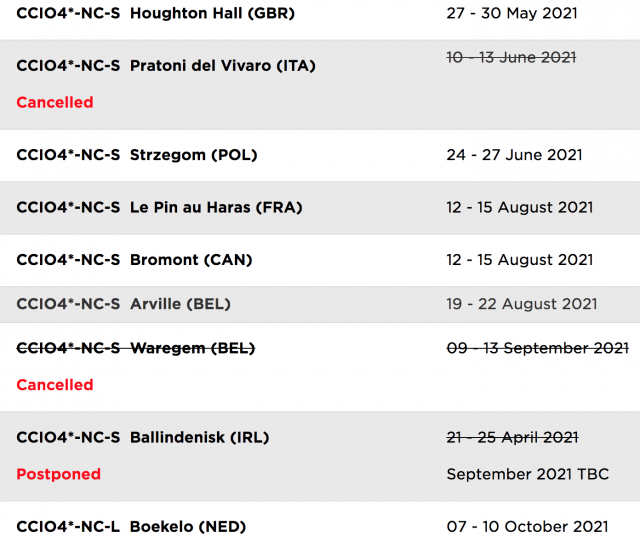