Desiree Bene has lived in South Jersey on Full Circle Farm for the past 24 years, teaching and training and riding her favorite horses, OTTBs. She has ridden up to the Preliminary level and owes her love of eventing — and a turning point in her life — to Capt. Edward Bimberg. 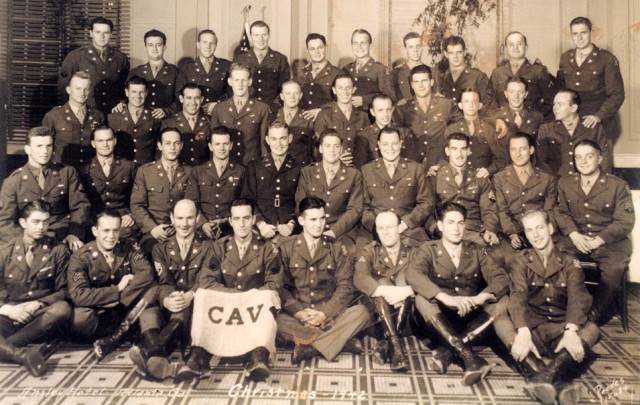 Capt. Edward Bimberg is is in the second row from the top, the seventh man from the left, in this photo of the 101st Cavalry Regiment taken in 1942. He passed away in 2010 at the ripe old age of 91 and was an active horseman to the end. Photo courtesy of United States Army Archives.

There are times in our lives we call “turning points.” When we are young, we are told that these will be significant, life-changing events for us, such as, graduations, marriage and having children. But for horse crazy, obsessed people like ourselves, turning points can also be defined by some monumental moment in our riding careers.

For example, I consider the last time I ran the egg and spoon race at the local game show to be a turning point. Even though it was decades ago, I still remember the excitement, anxiety and overwhelming disappointment of it all. Desperately clenching that saddle horn with one hand while holding that ridiculously tiny spoon with the egg in the other hand, I was determined to win!

It felt like it was me and Bo (my favorite summer camp pony) against the world. As we cantered off, full of fiery determination (me, not Bo), I tried as hard as I could to keep that egg from falling. But when we crossed the finish line, I was eggless, and for a long time I could not get the sight of that white and yellow splattered mess out of my head. And, so began the tears of a 13-year-old horse-crazy girl.

Feeling at a new low point with my riding skills, I eventually consoled myself knowing that we had at least given it an honest run (because I really did keep my thumb off the edge of that egg). But as I thought long and hard, it occurred to me that something was missing for me. There had to be more to riding then striving to win the infamous egg and spoon race at summer camp.

That’s when everything changed. For the next couple of years, I made my non-horsey mom drive me in all sorts of weather so that I could fulfill my insatiable urge to become a better rider by taking weekly English riding lessons. And then one day, to her relief, I secured a working student position after school hours at an “A” show barn, where I got a solid equitation education.

I earned everything I had, right down to my show shirt, in exchange for lessons and the opportunity to ride those fancy, expensive show horses that my trainers and their clients owned. It was hard work and long hours, but I was enthusiastic about every minute of it. Indulged in my “horsey” life,  I had no idea that those days were preparing me for my next turning point, the day I met “Captain” Edward Bimberg.

It happened in the early 80s when I was a broke, horseless college student. Desperate to ride again (and for a decent paying job), I looked up local riding schools in, of all things, a phonebook. Just days later, I eagerly showed up for my first riding lesson.

As Capt. Bimberg came out to introduce himself, I thought how strange it was that he called himself “Captain.” Was that his real name? Eventually, it became clear to me that I had spent way too much time daydreaming and doodling horses during high school history class because, unbeknownst to me, here I was face to face with a real-life, retired World War II captain from the United States Cavalry.

As I stood there trying to sort out the significance of it all, I simply smiled and exclaimed, “I’m really looking forward to my riding lessons with you!”

That’s how it happened: my first encounter with the eventing world. Catapulted from the comfort of my near-perfect, “A” quality, hunt-seat position, I spent a good part of the next three years on the end of a lunge line in a “bucket seat” dressage saddle, all without the luxury of stirrups or reins.

On the other end of the line was Capt. Bimberg shouting in his signature, nerve-wracking, militant voice, “Sit back and deepen your seat, for crying out loud!” And because he remembered seeing me around the show grounds working and riding hard during my high school days, the next thing I know I’m an employee for Capt. Bimberg, teaching and managing his stables.

During these years, Capt. Bimberg instilled in me a love for classical riding, along with countless military stories as he reminisced about his Cavalry days as a member of the 101st Regiment. For hours on end, he described how he watched the sport of eventing evolve during and after World War II.

He spoke of his beloved military horses and good friend and fellow Cavalry officer Bertalan de Nemethy, making me read his book (several times, of course) called The de Nemethy Method. Then there was the day that he proudly announced that he had been accepted to train at the prestigious Cadre Noir in Saumar, France. Naturally, I had no idea what that meant but, like any good friend, I happily shared in his gleaming bliss.

To be honest, before meeting Capt. Bimberg, I never even heard of eventing. But he was so enthusiastic about the sport and the importance of correct riding and proper horse care that it was all so contagious. Like all great Cavalry riders, he also taught me that the comfort and care of your horse came first, well before your own.

As I took his horses out in the fields to ride and jump, I was always thoughtful of how they felt. Riding in the open fields gave me a sense of freedom and peace I never felt in the high-pressured show rings, and it was liberating. I also realized that retired racehorses were more in my price range than those fancier hunters would ever be, and so I could realistically afford to pursue eventing. I was hooked!

Then, before I knew it, the day of my college graduation came, and yet another turning point in life. I had a degree in English and journalism now, and it was time to move on. As Capt. Bimberg and I said a heartfelt goodbye,  I went home to find my first editing job. But as I began to spend my days sitting behind a desk, the only thing that kept me sane was the memory of the freedom I felt galloping in the fields at Capt. Bimberg’s farm.

To save myself, within two years I had enough money to buy my own off-track thoroughbred and ride every day before or after work. When I was 29, I bought a farmette in South Jersey, where a lot of other turning points in my life occurred. I got married, became a mom, retired from eight years of deskwork, established a riding school of my own, and kept riding retired racehorses and competing in horse trials.

It’s been almost 24 years now since I choose farm life over a professional office career.  I even hold my own summer camps on my farm. And when I do, I sometimes think of the time I was a discouraged 13-year-old girl crying over a splattered egg, and I am thankful that it was the “turning point” that led me to where I am today.