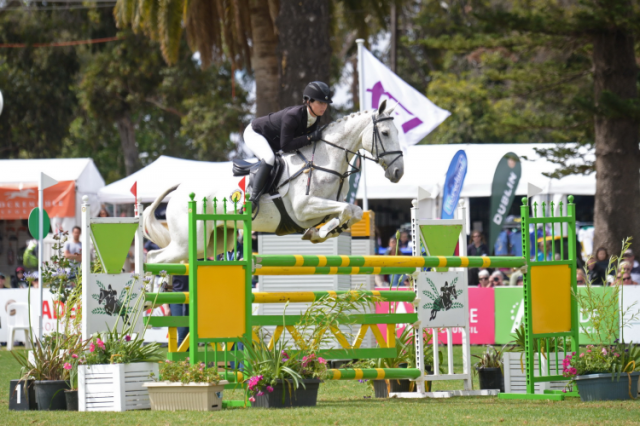 The FEI season may be over in North America, but the final CCI4* event of the year is coming up next week on Nov. 19-22 at Adelaide, the Australian International Three-Day Event, which is the only four-star competition in the Southern Hemisphere.

This year, 35 combinations are entered to compete in a field comprised predominantly of Aussies. Kiwis Clarke Johnstone and Abby Lawrence will represent New Zealand, while Alice Dunsdon is riding for Great Britain. This field of 35 ties 2005 for the largest number of competitors at this event since the four-star was first held in 2002.

Several past winners are entered to compete, including last year’s victors Jessica Manson and Legal Star. Two-time winner Stuart Tinney, who won in 2009 with Vittori and 2011 with Panamera, is the only rider to have three entries: Pluto Mio, War Hawk and Annapurna.

Wendy Schaeffer won the inaugural CCI4* in 2002 with Koyuna Sun-Glo and won again in 2010 aboard Koyuna Sun Dancer; she is entered with Sun Showers this year. Three other past winners will compete. Shane Rose, who won in 2004 with Beauford Miss Dior, has two rides in CP Qualified and Virgil. Megan Jones, 2005’s winner with Kirby Park Irish Jester, also has two entries: Kirby Park Allofasudden and History. Heath Ryan, who won in 2006 with Flame, will ride Jetsetter.

Alice Dunsdon’s journey to Adelaide is especially interesting, as she is on a mission to complete all six of the world’s CCI4* events on the same horse. She’s now completed Pau, Burghley, Luhmühlen and Kentucky with Fernhill Present, and now she and “Hilly” have made the long trek to Australia to contest Adelaide.

Colleen Rutledge and Shiraz currently hold the record as the only horse-and-rider combination to have completed five of the world’s CCI4* events (plus they did it with clear cross country rounds!). If Alice and Hilly complete Adelaide, they will join this exclusive club; she hopes to qualify for Burghley in her quest to complete all six.

Alice has been blogging about the road to Adelaide for Horse & Hound, and if you have some time to spare, all the blogs are fascinating and very much worth the read. They especially give an interesting insight into the long travel process and quarantine required in Australia.