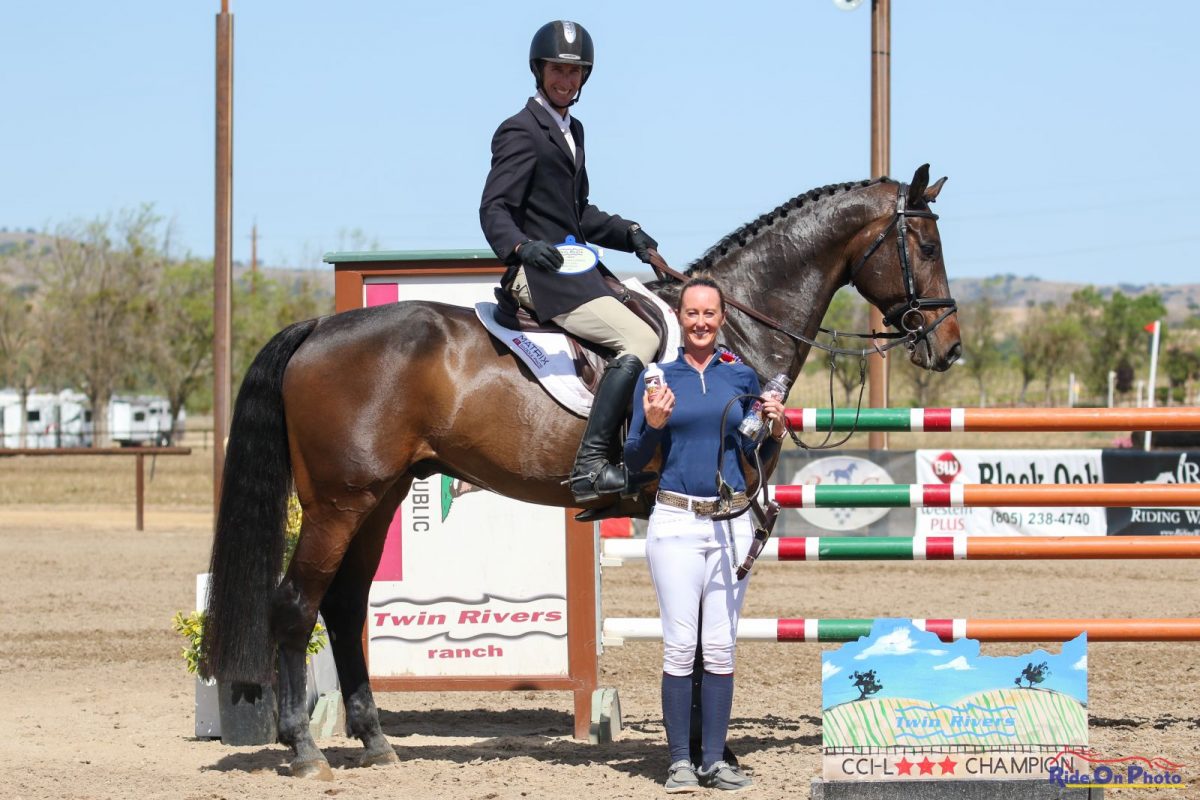 The 2022 Twin Rivers Spring International held over Easter Weekend in Paso Robles, Calif., was a key event for some of the West Coast’s top riders to assess their horses, and it proved to be a confidence booster for their journeys to the upper levels of the sport. In the first event of the year held at Twin Rivers Ranch, horses and riders faced questions on cross country presented by new cross country course designer Morgan Rowsell.

India McEvoy returned to competition for the first time since August 2021 and eight weeks after giving birth to her first son, Sam, to reunite with E’zara and win the CCI2*-Long in the black Oldenburg mare’s FEI debut.

Andrea Baxter’s Laguna Seca turned in his best score in an FEI event to win the CCI3*-Short for the bay Holsteiner gelding’s first blue ribbon since last year’s Twin Rivers Spring International at the CCI4*-Short.

James Alliston and RevitaVet Calaro followed up their CCI3*-Short victory at the Galway Downs International earlier in April with a win in the CCI3*-Long. Alliston also used Twin Rivers as the final prep for Paper Jam before the Land Rover Kentucky Three-Day Event. Paper Jam was second at Advanced to Alliston’s other mount at the level, Nemesis. Plus, Irish Pop won at Intermediate for Alliston.

Helen Alliston successfully returned to the CCI4*-Short level aboard Ebay for the first time since breaking her hip and pelvis in May 2021.

And, Castle Larchfield Purdy, now 20 years old and making his first start since competing at the Tokyo Olympics with Lauren Billys of Puerto Rico, won the Preliminary Rider B division with new rider Maddie Smith. The bay Irish Sport Horse gelding and Billys were also Olympians in Rio in 2016. 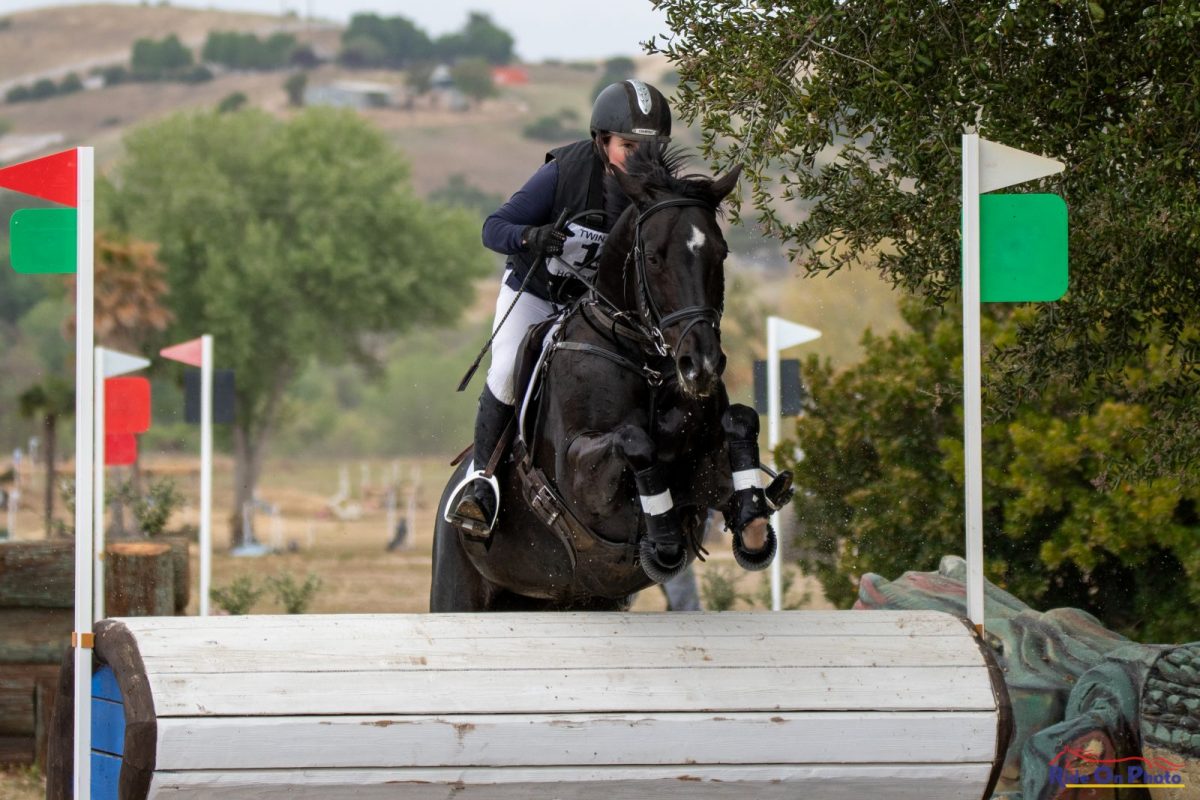 India McEvoy and E’zara. Photo by Ride On Photo.

The Twin Rivers Spring International marked the first time for the event that the FEI cross country courses were designed by Morgan Rowsell (FEI Level 3 and USEA “S” course designer).

“I think ultimately the West Coast riders really want to have these courses up to snuff so that they can prepare for Kentucky and international competitions without having to spend all their time, money, and effort going out East,” he said. “My three-year plan would be to get some more infrastructure out to the racetrack [at Twin Rivers] and notch it up to the standard. We have a great event.”

Rowsell said that this is the first time he has designed cross country courses on dirt and that he was pleased with the footing at Twin Rivers. The background he brought from designing up to the Advanced level at the Millbrook Horse Trials, at the Horse Park of New Jersey, at Rocking Horse, at the Aspen Farm Horse Trials, and more was appreciated by riders on the West Coast.

“I thought it was awesome,” James Alliston said. “They used all the water jumps for the 3-star long, which is great. If you have them, why not use them—there was a bounce in, a big drop in, a water-to- water jump. It had everything, so I thought it was a really, really good course. It was long, which I think is important on flattish grounds to make it an endurance test. It had every sort of fence really.”

Added Twin Rivers organizer Connie Baxter: “We were really excited to welcome everyone back to Twin Rivers this year, and we appreciate all the support from the volunteers, sponsors, course builders, staff, and officials to make it happen. We’re excited to have Morgan be part of the team and what he will continue to bring to the course design of the event.” 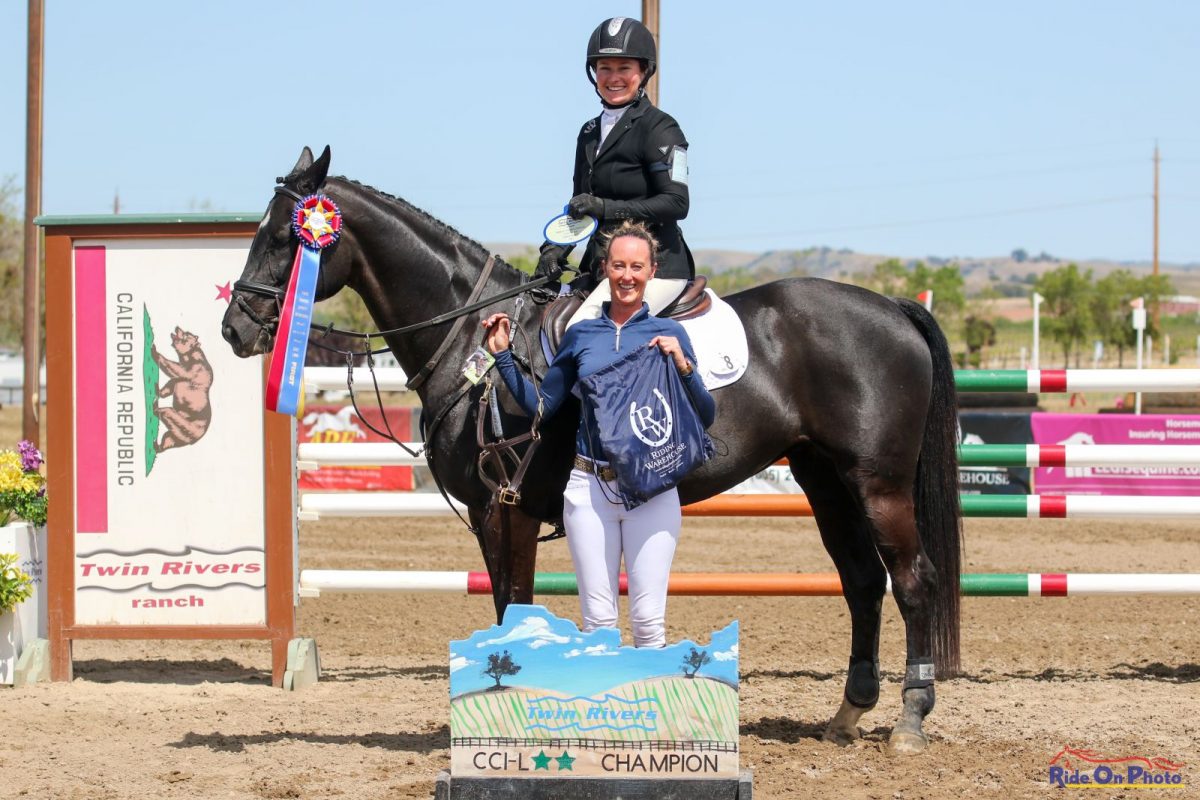 India McEvoy and E’zara. Photo by Ride On Photo.

The lowest finishing score at the FEI levels was turned in by India McEvoy and E’zara with a 30.8. McEvoy was competing on the mare that she says stands just 15.1hh for the first time since having a baby eights weeks ago.

“I’ve had this goal of a two-star for like five years,” McEvoy said. “So, it was a big weekend for us to complete and do well. It was a fun weekend.” McEvoy’s coach, James Alliston, had ridden E’zara in her two previous events at the end of 2021.

“I just started riding her six weeks ago after I had my boy,” McEvoy said.

In addition to getting back in the saddle after giving birth, McEvoy’s sense of timing also showed through by finishing her double clear cross country round on the optimum time of 7:19, giving her the tiebreaker over Taylor McFall and Stoneman, who finished with an identical score of 30.8. 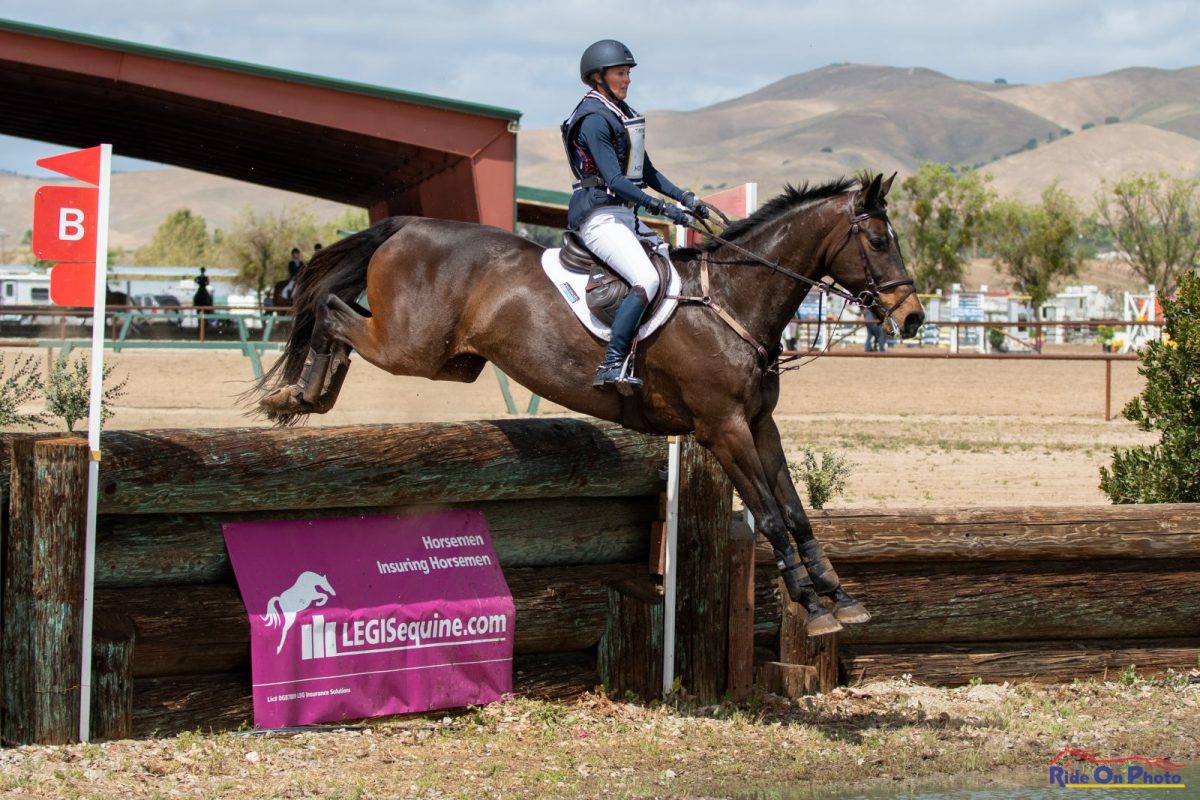 In the CCI3*-Short, Andrea Baxter and Laguna Seca were the only pair without a rail in stadium jumping and the only pair to finish within the time while jumping clear on cross country to finish on their dressage score of 33.0. Their cross country time of 6:01 was 10 seconds below optimum and 13 seconds faster than any other competitor at the level.

“By riding him fast on the cross country, I really realized that he finds his scope out of a more forward step and gained a lot of confidence from doing that,” Baxter said. “I think going forward, I’ve discovered a new ride on him.”

Baxter said she plans to move Laguna Seca back up to the Advanced level for his next show.

“I moved him up to Advanced last year, probably a little bit prematurely,” Baxter said. “He was going well, but not as well as I would have liked. So, I stepped him back down to Intermediate, 3-star to make it a little smoother and figure out where I could fill in the gaps. This weekend, I had the pressure on to win and finally went fast and think he had the best round he’s ever had. I’m really excited.” 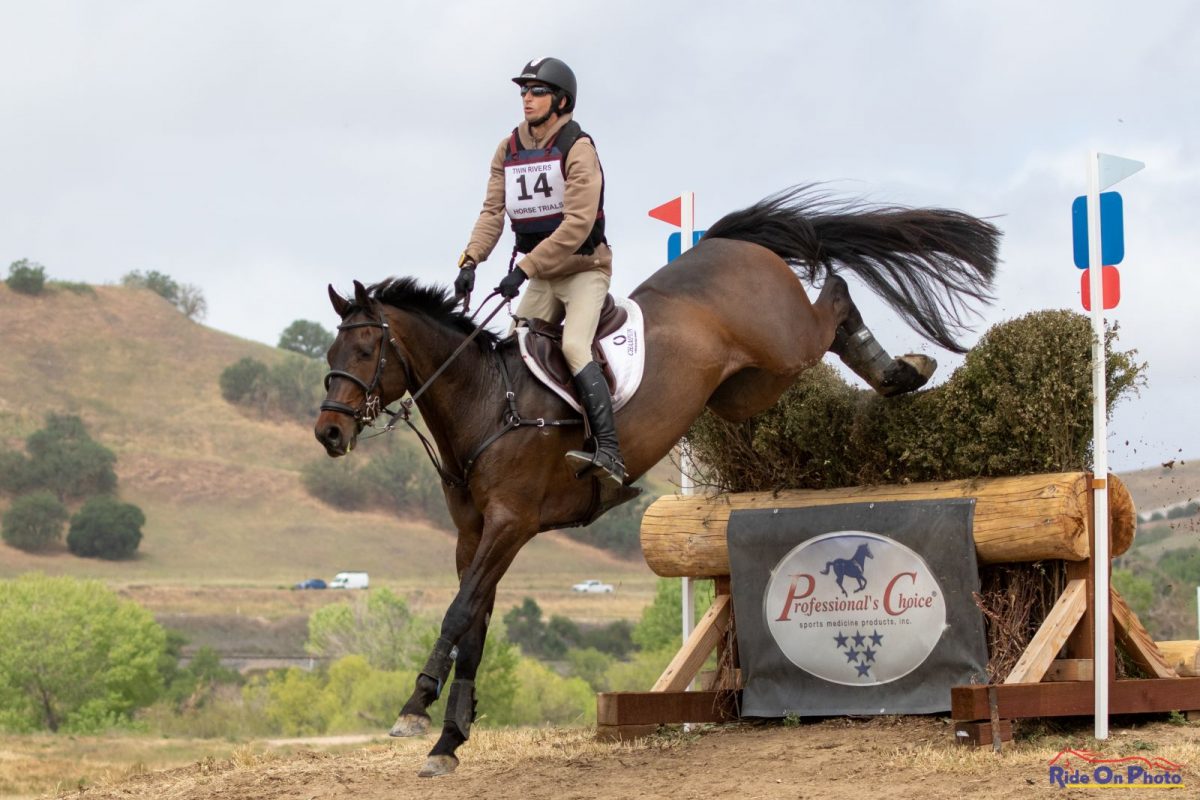 In the CCI3*-Long, James Alliston and his bay Holsteiner gelding RevitaVet Calaro recorded a double- clear cross country round and added four jumping penalties to finish at 38.6 and defeat two entrants ridden by Chloe Smyth, the dark brown Thoroughbred gelding Flyin Huckleberry in second at 44.7 and the bay Belgian Warmblood gelding Guinness on Draught in third at 45.1.

“He’s a bit buzzy in the mind, but he’s really talented,” James Alliston said. “He’s just hot, and it takes a bit of work to have him relaxed in the dressage. He’s just sort of a bit lit-up in general on the show grounds, kind of nervy. He has a lot of talent, going well, and will have learned a lot this weekend.”

James Alliston completed a trifecta of blue ribbons with the chestnut Canadian Warmblood gelding Nemesis at Advanced and the bay Hanoverian gelding Irish Pop at Intermediate.

Nemesis has not been outside of the top two in seven events since July 2021. He overtook James Alliston’s other entrant at Advanced, the chestnut Hanoverian-Thoroughbred gelding Paper Jam, by jumping clear and just adding time penalties to finish on a score of 47.6.

“Nemesis is green and has only done one Advanced two weeks ago, but he’s a very nice horse,” he said. “Just giving him mileage at the level really. It was a nice, strong course, had all sort of different jumps, lots of different jumps in the water. So, I think he will have learned a lot.”

James Alliston is scheduled to compete at the Land Rover Kentucky Three-Day Event for the first time since 2017 with Paper Jam.

“I’m quite nervous,” said Alliston, who previously competed in Kentucky every year from 2011 to 2017. “I think when you’re going every year, it’s just sort of routine. But, I haven’t been in a while, and it’s the horse’s first time going.”

Irish Pop finished on his dressage score of 30.6 at Intermediate over Haley Turner and Shadow Inspector. 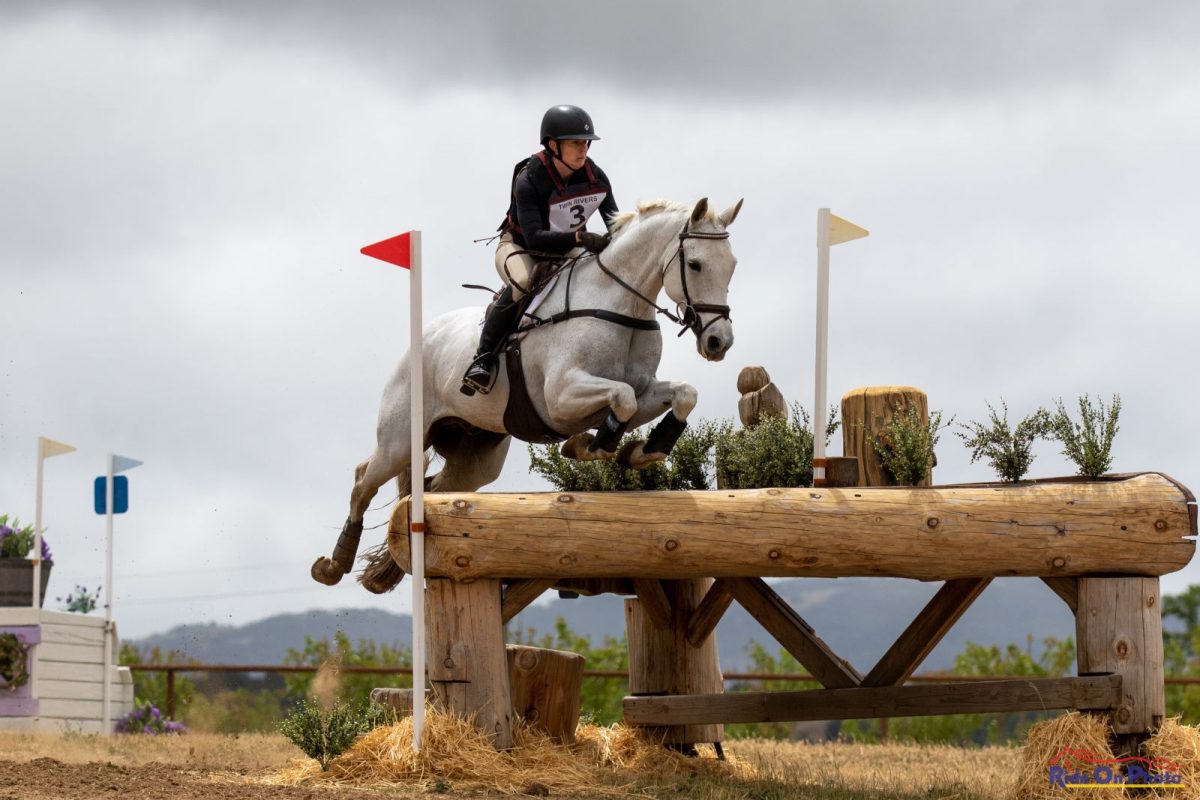 Helen Alliston and Ebay. Photo by Ride On Photo.

The CCI4*-Short was the 16th victory for Ebay since Helen Alliston began competing on the grey Oldenburg gelding in 2016, but she said this win was particularly significant.

“This was our first big one; we had a bit of a crash last May and I broke my hip and my pelvis,” she said. “It was a little bit nerve-racking going into this one. This was my first time back at the level, but he felt fantastic and confident. So, I was thrilled.”

Helen Alliston and Ebay also won at the level at the Woodside International in October 2019. Their win at Twin Rivers over Madison Temkin and the bay Thoroughbred gelding Dr. Hart came after a 29.1 in dressage and adding four stadium jumping penalties plus some time penalties in the jumping phases to finish on 42.3.

Wrapping Up and Looking Ahead 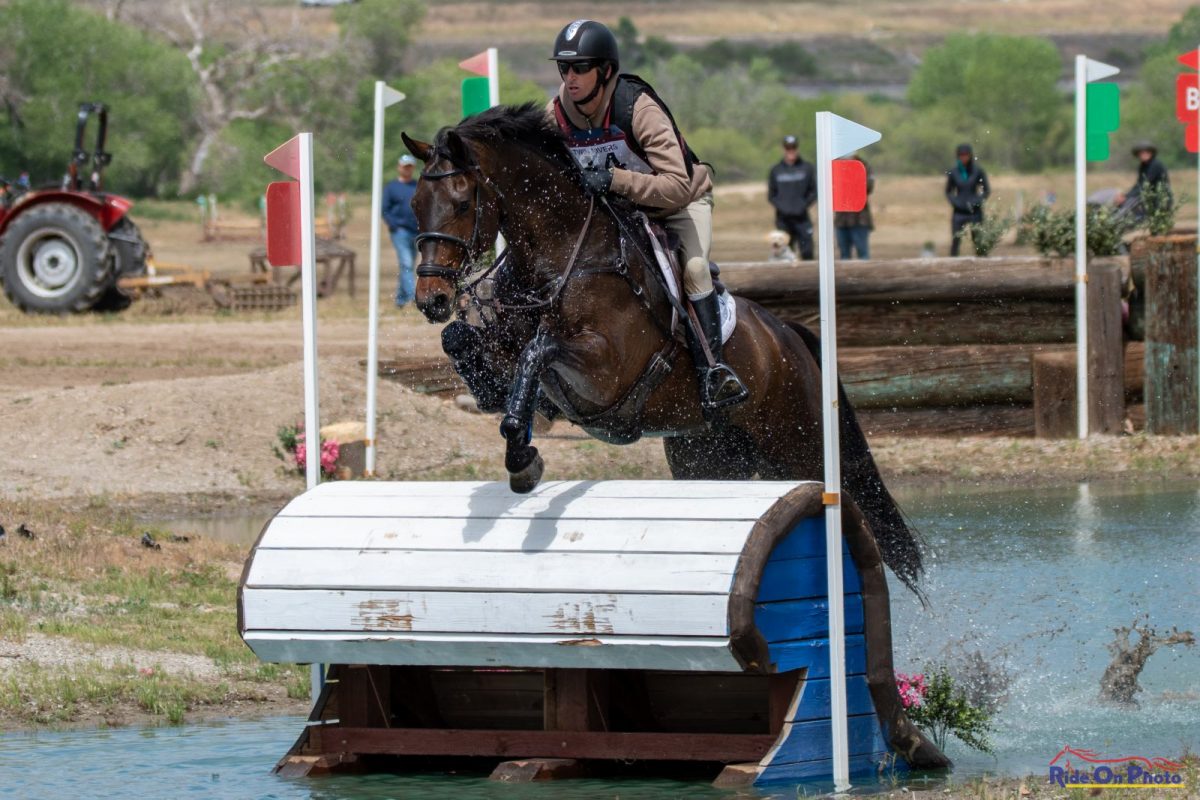 Looking ahead in the 2022 calendar, Twin Rivers is scheduled to host the Twin Rivers Summer Horse Trials from June 30 to July 3, the Twin Rivers Fall International from Sept. 22 to 25, and the FEH & YEH Last Chance Qualifier and West Coast Championships from Oct. 27 to 29.

The full list of winners from the 2022 Twin Rivers Spring International:

Twin Rivers was proud to host the 2022 Twin Rivers Spring International with generous support from sponsors.

Volunteers play a major part of events at Twin Rivers. Twin Rivers’ generous volunteer incentive program includes vouchers for show stabling and credits for schooling between events at the beautiful 500-acre venue. That is in addition to the genuine appreciation of the Baxter family and the entire Twin Rivers team. To sign up, please visit www.twinrivershorsepark/volunteer.

Many thanks to Ride On Photo for the images — click here to shop your rider gallery if you competed at Twin Rivers this weekend!