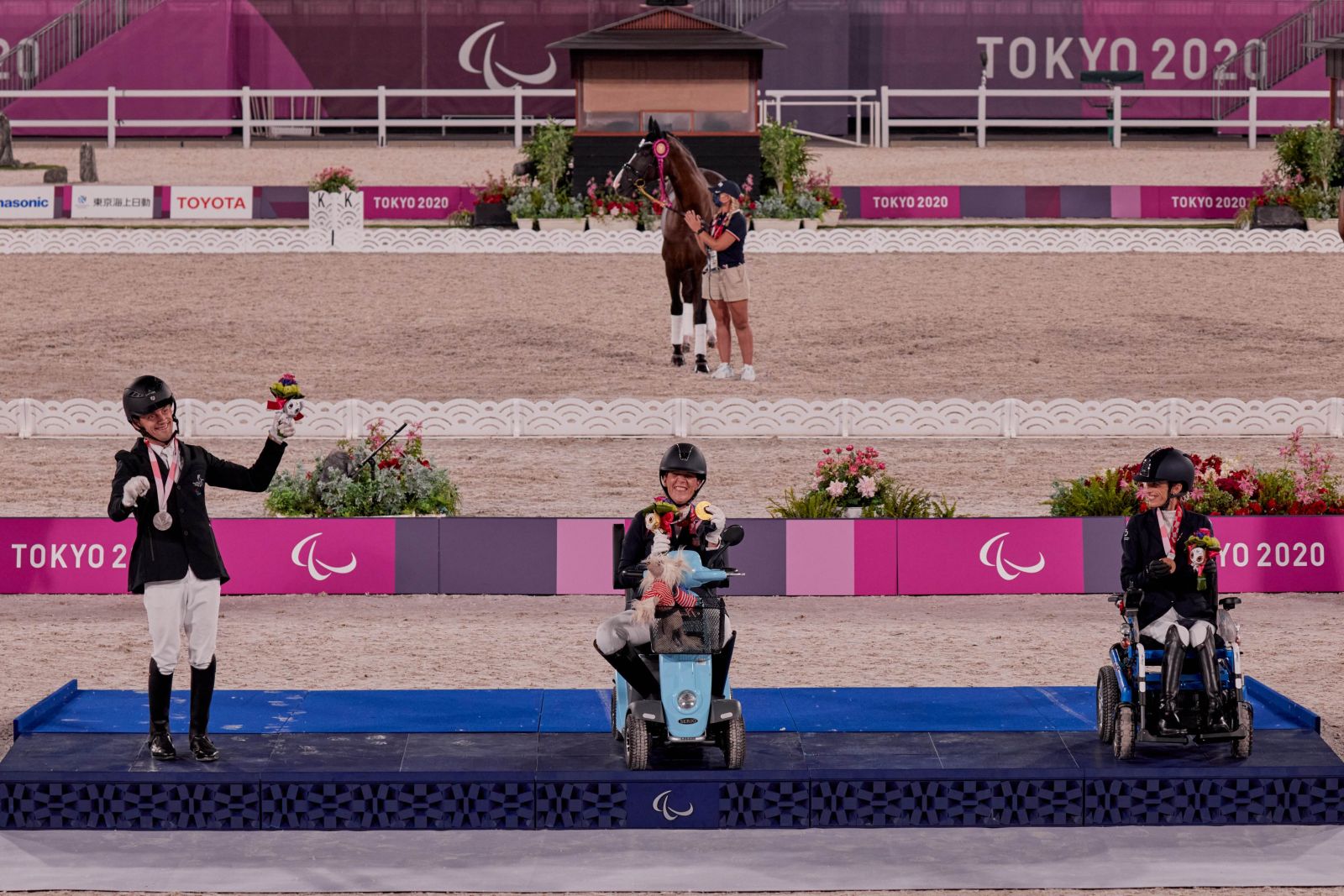 The second day of Para Dressage competition at the Tokyo 2020 Paralympic Games saw the remaining two Grades, I and III, battle for the Individual Test titles and the important qualification slots for the upcoming Freestyle To Music test.

A twist of fate would have it that both victors were new to the top spot of the Paralympic podium, a feat which is easier said than done, given the longevity of some Para Equestrian careers and the experienced athletes they faced in the impressive Baji Koen arena today.

An imperious performance from Roxanne Trunnell (USA) secured her first ever Para Dressage global title at the Tokyo 2020 Paralympic Games today. Currently World No.1 across all five Grades, Roxanne won the Grade I Individual Test with a massive score of 81.464% with her mount, Dolton.

The silver medal went to Rihards Snikus (LAT), a keen DJ known as DJ Richy Rich to his friends, who was first into the arena and laid down a challenging score of 80.179% on King of the Dance. Reigning FEI World Equestrian GamesTM champion Sara Morganti (ITA), took bronze on Royal Delight with 76.964%. It is a medal that is especially sweet for her, as her horse failed the vet inspection at the Rio 2016 Paralympic Games.

Speaking after her Test and medal ceremony, Roxanne said, “Dolton felt like he was really with me and was really a good boy. He surprised me with how calm he has been. It’s been wonderful at the Games. Everyone is so nice and helpful.

“This is just the tip of the iceberg for Dolton. He’s so young and he’ll be able to do so much more. It means a lot to me as well. It was very nice up there. We had our own little group of people that looked happy.”

As the World No. 1, Roxanne holds two World Records for the highest scores in a Freestyle Test (89.522%) and in Grade I Team Test (84.702%). Roxanne came to these Games with huge expectations placed on her shoulders. She remained, however, unfazed. “I don’t think about pressure – that’s all just noise to me,” she added. “It’s just me and Dolton doing our own thing. He is loving all the attention, it’s fun. He’s a goofy young horse, he’s temperamental but also easy to get along with.”

As debut Games go, it’s fair to say that Tobias Thorning Jorgensen (DEN) is having a good one. In his first ever ride in a Paralympic Games arena, he won the Grade III Individual Test with a score of 78.971%, on Jolene Hill.

“It was amazing, it really was,” Tobias said, beaming after his test.

“I was so focussed all the ride but on the last turn I just had this feeling it was great. I was so happy I just smiled.

“I knew that Rixt and Natasha would be my biggest opponents and are always coming to take the medals but I also knew that, if I find my best, I could take the medal. I knew I had to do that.

“Jolene is a mare. If I don’t ask her first she just gives me the finger and says ‘You can do something else’. In my warm-up I ask her ‘Is this OK?’ and then in the arena she is there for me. If I ask her correctly, she will go through fire for me.”

Dream teams and teams of dreams up next

Tomorrow sees the start of the Team competition – run over two days – and is likely to be one of the closest in the history of Para Dressage at the Paralympic Games. USA as World No. 1 will want the gold to seal their meteoric rise, while Great Britain and The Netherlands will be working hard to deny them that.

Following the second day of competition and the completion of the Individual Test, Great Britain still tops the leaderboard, adding a silver to their tally today with one gold, two silver, and a bronze, followed by the Netherlands, Belgium, USA and Denmark, who have picked up a gold medal over the past two days.