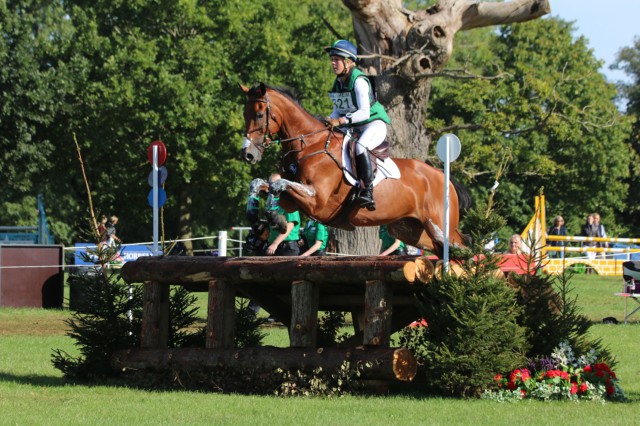 Kylie Lyman and Lup The Loop. Photo by Samantha Clark.

Sunday couldn’t have been more different from yesterday’s conditions at Blenheim, and the footing this morning was practically perfect on David Evans’ CIC3* cross country course. Willa Newton was the eventual winner on the chestnut mare Caja 20 after a clear round cross country with just 2 time penalties. Laura Collett took second place on Mr. Bass, adding nothing to their dressage score, and Andrew Nicholson rounded out the top three with Swallow Springs, a rather eye-catching grey. The top three are all 8 year olds.

Kylie Lyman was practically foot perfect on Joan and Geoffrey Nichols’ very special 8-year-old Lup the Loop and came back clear with just 9.2 time faults to finish just inside the top 20 in 19th place. Apart from changing her plan at the corners coming out the the water, she told me she had a fantastic round.

“He was amazing! I think we both left the start box and then it was, ‘Oh my God, we’re at Blenheim!’ and we both got our act together after that and he did everything that I asked. I definitely had to work a little harder than I anticipated, but he’s such an honest horse and he’s so scopey. I don’t know what else to say, it’s still sinking in!”

“I knew that I was going to have to make a conscious effort to be deliberate in all the combinations because my natural inclination is to get a bit forward and ride a bit forward which isn’t always a bad thing, but he’s a big, scopey horse and his stride gets too long and I knew that I had to reel it a bit back in after Millstreet, so that all went to plan. The only place it didn’t was jumping out of the water–he has a little rub on one side of his mouth so he’s a bit sensitive with the steering, so I jumped the corner a little straighter than I had planned and realised jumping in there was no way I was putting a bend on it, so I stayed as direct as I possibly could, and he was honest and we got there. That was not the way I walked it but I didn’t want a 20!”

Kylie used her head, and this round has set her up perfectly for her upcoming competition at Boekelo. “I knew at the end of the course the dragons and the two houses at the top of the hill that I was going to have to be extremely patient, and I felt like he listened and I made myself wait, so I think it was definitely a good prep for Boekelo because I’ve never been there but I know I’m going to have to have a plan and not do the first thing that I want to and be a little bit more patient, and maybe wait for the next distance, so I felt in that way it was very educational.

“I know it’s not as busy as yesterday but it’s the most atmosphere we’ve had out on cross country and that was a good education for both of us and I’d say it probably affected me more than I’d anticipated, leaving the start box I thought I had my focus and my plan and I just got out there over the first couple of jumps and went, ‘Holy cow!’, and then got it back together!” 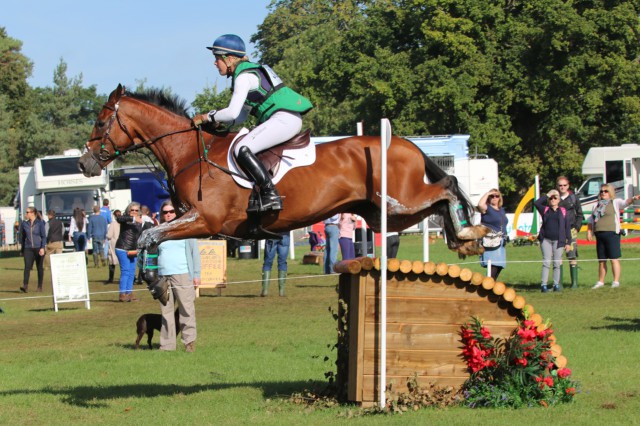 Kylie Lyman and Lup The Loop. Photo by Samantha Clark.

Kylie will go back to Ireland now and re-group. “This fills me with confidence, but it’s also a kick in the pants to keep working at it, to get a plan and stick to it, to be patient and let him do his job and make him accountable too and not just let him think he’s a good boy. Kick on and go, it’s a different level and I think I have to stay patient.

“He’s a pretty easy horse as far as fitness is concerned even thought he’s a pretty big horse and part warmblood, and I don’t jump him a lot–I do a little grid-work in between competitions. I’m getting some dressage help over there, and we’ll just keep on doing what we’re doing and not change too much and work on increasing his fitness a little more and keep our focus and do the best we can.”

Kylie was a working student with Bobby Costello for four years and now works for Lup the Loop’s owners, Joan and Geoffrey Nichols, and for her this trip has been invaluable, but also an exciting marker for the future.

“I still ride with Bobby whenever I can but I probably do a little too much on my own! I need to buckle down and work on our education on the dressage a little more! Bobby’s been stuck with us for a long time, but we know each other well and I feel like we always pick up where we left off. This was the first time I got to work with David so that’s been a new experience and a huge help. For me it’s almost tougher coming here and having someone in the warm-up, and having that extra pressure was a big thing, but it was also a great help and I feel like a have a lot to take home to work on. I definitely have homework to do and I’m very happy.

“I’m just so excited to be here. To have this opportunity is incredible, but for me the more exciting part is that he’s just 8 years old and it’s both of our first season at Advanced and I really couldn’t have asked for more, but I’m really excited for next year, to have a winter to put the time into improving the dressage for both of us, and him getting stronger and having this year’s experience.

“I’m really thankful to be here and have the grant to go to Boekelo, and I’m trying to be excited to be here and enjoy it and not let the pressure get to me too much. I don’t want to beat myself up too much but I want to be competitive, but I want to look back in a year, two years from now and remember how lucky I was to be here. There aren’t a lot of horses like him, nor people like Joan and Geoffrey. They are amazing.” 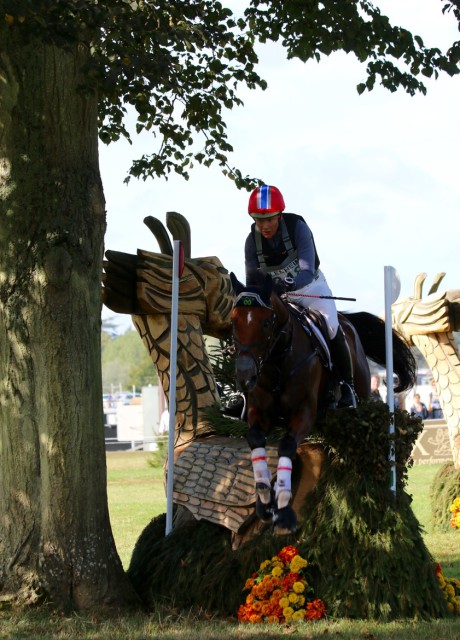 Tamie Smith went about half an hour later and must have been relieved to be riding in much more pleasant conditions, although she wasn’t taking any chances and borrowed some reins from Hannah Sue Burnett regardless. She needn’t have worried, Dempsey II jumped and galloped round like a pro, coming home clear taking all the direct routes and collecting only 7. 2 time faults to finish 23rd.

“He was super, everything was right out of stride and I felt like the course was very suited to him because it was lots of galloping and then quick turning, technical lines, he felt fantastic. I was very happy after a day like yesterday, it was good to have another horse to come out and get around. One of the corners I was planning on getting four but he added and got five but he was perfectly fine. He’s so quick on his feet and such an athlete. I’m lucky to have him, he’s a phenomenal horse.

“I’ve always had a ton of confidence in him and I haven’t had the struggle with him that I’ve had with Chloe (Twizted Syster). He’s not as strong as her, he’s opinionated like her but he’s not physically as strong as her and I’ve had him since the beginning. He’d never jumped until I got him and I think that helps when you put a foundation on them that you want and you make them your own. Chloe had already done a one-star when I got her and everybody has a different ride.”

Tamie had a pretty high-powered crew helping cool out Dempsey – Holly and Marilyn Payne were helping USEF Director of Eventing Joanie Morris carry buckets of water and wash him down and scrape him off…team work!

As the ERM finale is about to kick off, the CCI3* show-jumping is already underway. It’s non-stop here at Blenheim and we’ll be back with news of our top 30 U.S. riders Kurt, Holly and Hannah, and the final results as soon as possible. Go Blenheim, and Go Eventing!