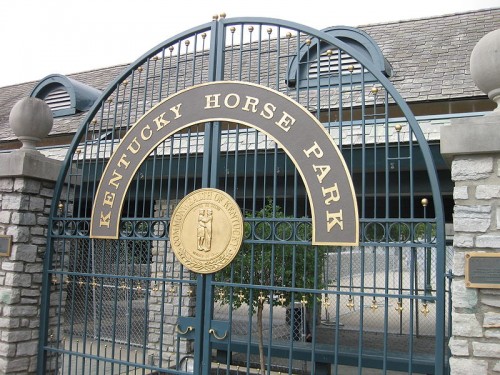 Will the Kentucky Horse Park host the 2018 WEG? Photo by Lisa Andres of Wikimedia Commons.

The FEI announced this morning that the U.S. and Great Britain have joined the bid process to host the 2018 World Equestrian Games. It seemed Bromont had the bid in the bag earlier this year when all other potential host cities withdrew from the process, but the FEI began accepting new bids in July when Montreal was unable to commit full public sector financial support for the Games. Wellington, Fla., and Lexington, Ky., have now officially thrown their hats into the ring, and Great Britain must declare which city will seek to host the Games by a Nov. 15 deadline.

The FEI has received formal Expressions of Interest from Great Britain, the USA and Canada to host the FEI World Equestrian Games 2018, after re-opening the bidding process on 1 July 2013.

The USA has identified two potential host cities — Wellington (Florida) and Lexington (Kentucky) — and Great Britain will have to confirm the proposed host city with the FEI before the 15 November 2013 deadline for receipt of Bid Applicant Questionnaires.

Canada confirmed its initial bid to host the 2018 Games in Bromont/Montreal. The FEI Bureau opted not to allocate the Games to Canada at its July meeting after the Canadian delegation was unable to provide the full public sector financial support required. As a result, the Bureau re-opened the bidding process for 2018, but expressed the hope that Canada would confirm its decision to continue in the bidding process. The Bureau made it clear at the time that any follow-up bid from Canada would be evaluated in the same way as other applicants.

The Bid Applicant Questionnaires will be reviewed by the FEI Evaluation Commission at FEI Headquarters before the host city candidates are announced on 2 December 2013.

In the final stage of the bidding process, the Candidates will formerly present their bids to the FEI Bureau at its spring 2014 meeting, after which the host city for the FEI World Equestrian Games 2018 will be announced.

“The FEI World Equestrian Games is our flagship event, appealing to huge global audiences of equestrian enthusiasts and sports fans, and these expressions of interest by Great Britain and the USA alongside Canada are testament to the power of these Games”, FEI Secretary General Ingmar de Vos said.

“We are now looking forward to receiving the Bid Applicant Questionnaires next month, to naming the candidates in December and ultimately of course to announcing the host city for the FEI World Equestrian Games 2018 next year.”